“What will happen,” the hypothetical question went, “when there is a disaster and President Trump is put to the test?”

Now we know the answer: Mr. Trump came up mind-blowingly short. Presented with a natural disaster that plunged 3.4 million American citizens into an abject crisis, Donald Trump did what Donald Trump does. He played to his political base, lashed out at the media, race-baited, spent the weekend on the golf course, deflected, distracted, and generally swatted at flies. He finished up the weekend by undermining his own secretary of state’s delicate negotiations with North Korea.

The job of a president—saving lives—didn’t register, because who those at-risk lives don’t fit into Trump’s narrow political calculus.

Let’s not fool ourselves: Puerto Rico and the Trump administration’s non-handling and deprioritizing of the crisis have a great deal in common with his attacks on black NFL and NBA athletes. Race courses through every decision in Trump’s presidency. Does anybody think that if this island was populated by white American taxpayers that it would come dead-last? Does anybody think that Donald Trump would even think of putting supporters like Texas Governor Greg Abbott or Florida Governor Rick Scott so low on the list? Especially because Texas and Florida are electoral bedrocks of Trump’s presidency and home to many of—his words—“my people.”

He wouldn’t dare. And who else can see the advisors credited for being bridges to Trump’s base—think Steve Bannon, Stephen Miller and Kellyanne Conwway—whispering in a certain presidential ear to slow aid. After all, how would the white nationalist base react if President Trump swung into swift, compassionate, decisive action on behalf of Latinos? That’s not the #MAGA that most Trump voters pulled the lever for, and he knows it. Not all natural disasters are created equal. If he didn’t handle Harvey and Irma so well—I’ll give credit where it’s due—and if he didn’t include racially coded language similar to that which he has used in previous racially loaded conflicts, I wouldn’t make this assertion. But he has made it apparent.

Prominent members of the African American or Latino communities, be they sports stars or high-ranking elected officials? They should be “grateful.” Or if they are perceived in conflict or run counter to his worldview, they are “ingrates.” Ditto the implication that Puerto Ricans are lazy freeloaders responsible for their community’s demise and “want everything to be done for them.” Remember, Donald Trump sees himself as chief of a scattered, angry tribe, and he governs as such. And blacks, Latinos, and women all succeed for the grace of Mr. Trump and his tribe. Fall in line, and bend the knee, but don’t even think of taking it.

You can imagine how Trump despised being read the riot act and have his failures enumerated—by a Latina no less—who took her gloves off on cable news, which Trump lives and dies by.

After George W. Bush’s utter ineptitude lead to a bungled mismanaging of the Katrina crisis 12 years ago, conventional political wisdom dictated that the RuPaul Rule—”don’t fuck it up”—would always apply to federal handling of a natural disaster.

That was the case in the intervening dozen years—until Donald Trump. Bush’s team disingenuously feigned lack of knowledge that the situation was playing out so catastrophically. All the while, they furiously scrambled, insisting that it wasn’t so bad and they were in control—pay no attention to the families in the Superdome and the bodies in the streets. But then as now, television viewers were presented with split screens of terrifying devastation on the ground and partisan Washington blowhards engaging in a noxious brew of self-congratulation and clenched-smiled mendacity. It never goes well: Remember the turning point when Wolf Blitzer repeatedly noted on day one of the hurricane that those devastated by Katrina were poor and of color—with the clear implication that they mattered less to the administration? The same can be said for the victims of Donald Trump’s avoidable, offensive whiff.

We live in polarized times, and there are increasingly few places at the presidential level where politics don’t creep. The debt ceiling and defense authorization used to be two, but not anymore. Natural disaster relief was one of the last hold-outs, if not the last. If a wildfire, flood, or hurricane hits American citizens, presidential politics are parked at the door. It’s true there have been some cracks in the foundation, like a possible racial explanation for a delayed and inadequate response to Katrina and congressional Republicans wanting to stick it to a blue state by refusing to vote for Sandy aid. Until now, presidents stuck to inviolable norms on this issue. In fact, with his response only weeks before Maria, I was relieved that—for once—Trump got the memo.

Until this past week, he had. In fact, the Trump administration won praise and a minor uptick in the polls for its responses to Hurricanes Harvey and Irma. The administration did what government is supposed to do: It freed up money and manpower, aided local efforts, removed obstacles, and communicated with local officials.

Trump responded to a submerged Houston and battered Florida, so you can’t say he doesn’t know what to do. So what’s the difference?Two words: Puerto Ricans. It’s clearer than ever that Trump’s rallying cry of “America First” is missing a lead-in word. It should read “My Tribe First.” Let’s be open about it, because he certainly is. 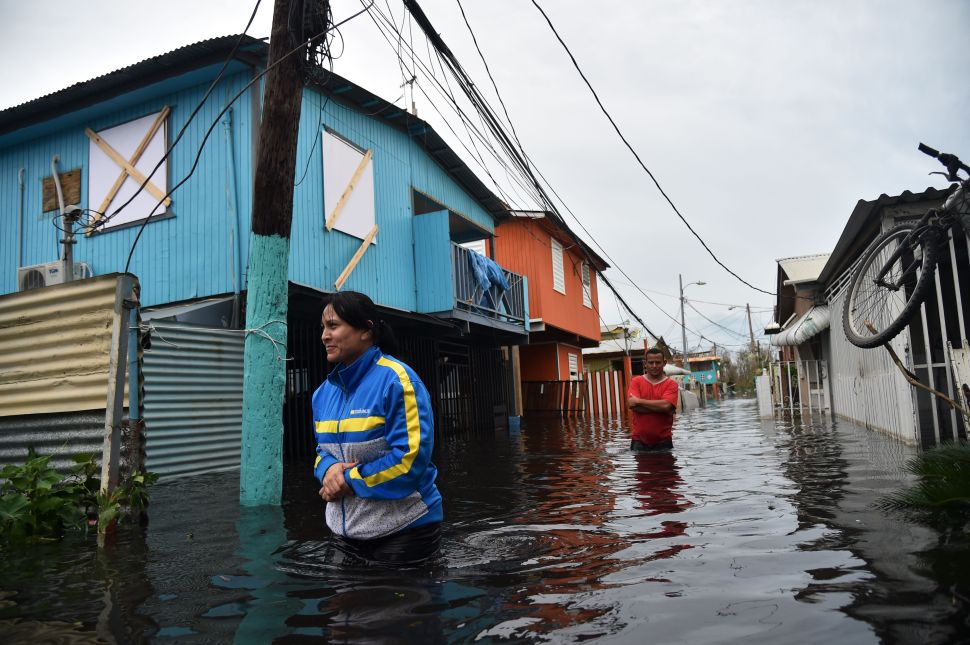