The newest rankle in American-Turkish relations threatens much more than diplomatic pride. Suspending visa services across Turkey is a dangerous gamble for the Trump administration. Likewise for Istanbul.

Consider this: Turkey has been a fighting ally against the Islamic State in neighboring Syria and has worked to thwart Syrian President Bashar al-Assad since that country descended into civil war in 2011; Turkey plays host to a decades-old U.S. military installation—Incirlik Air Base—that is key hub for U.S. Air Force attack aircraft operating against the Islamic State; and an estimated 1,700 U.S. companies do business in Turkey, currently, with American investors reportedly owning around $20 billion of equities in the Istanbul stock exchange, according to Barron’s.

The current flap is nothing to shirk at—the tension has been building for quite some time but has become a diplomatic row that can’t be ignored, not least of which for NATO, to which both countries are allied members.

Turkey, feeling ostracized from NATO, has turned to American diplomatic foes and regional trade competitors—including Russia, China and Iran—for support and has cited a growing “trust” issue with NATO.

Resentment is unlikely to diminish.

The first shot across the bow came when Turkish President Recep Tayyip Erdogan accused the West of involvement in a coup attempt last year in Istanbul, Turkey’s capital, symbolically culminating on the Bosphorus bridge, which connects Asia with Europe.

However much the charge was rooted in conspiracy theories, it was a thinly-veiled coda geared toward the United States. Turkey blamed followers of the cleric Fethullah Gulen, oddly-based in Pennsylvania, for the uprising, rounding up thousands of Gulen’s supporters inside Turkish borders. (A total of about 50,000 have been arrested on various charges relating to the coup attempt by Turkish authorities and Turkey wants Gulen extradited.)

Then Erdogan denounced U.S. support of Syrian Kurds as its main ground force partner against the Islamic State in chaotic Syria.

Turkey, which plays host to around three million Syrians, had been one of the biggest supporters of rebels fighting al-Assad during the six-and-a-half-year war, but the country has shifted away from removing the Syrian leader from his authority in Damascus to securing its own border against Kurdish militant groups and jihadist terrorists, both of which Istanbul considers obvious and legitimate threats—particularly PKK Kurdish separatists operating both inside and outside Turkey’s border, which the U.S. is helping arm in Syria.

Even still, the White House put on a cheery public-relations façade until as recently as two weeks ago on the sidelines of the annual UN General Assembly meeting in New York, when Trump and Erdogan last met, with President Trump saying relations with Turkey were “the closest (they’ve) ever been.”

The arrest in recent days of a U.S. Consular employee for being a spy set off the American cessation of visa services in Turkey over the weekend, to which Turkey responded in kind.

None of this serves anyone well.

American corporate firms have committed upwards of $12 billion in Turkey in the form of foreign direct investment in the last 15 years, Barron’s noted, which is equivalent to about 8 percent of the Middle East nation’s total FDI during that time. From 2009 to 2016, total trade between the two nations spiked from $10.8 billion to $15 billion, but it could be even better.

With around 1,700 U.S. companies operating in Turkey, American executives are closely watching the situation, knowing trade could be even better were it not for the sabre-rattling.

James Sawyer—a Turkish political observer with fieldwork research expertise in the country and an associate with the Eurasia Group, a political risk consultancy firm—said the problem isn’t going away tomorrow.

“The Turkish government will want to find a way out of the current crisis, but it will not be able to do so immediately,” Sawyer told the Observer on Tuesday. “Erdogan needs to balance national security—like its efforts to crack down on the Gulen movement—with pragmatic concerns, such as mitigating the negative economic consequences.”

Additionally, Sawyer noted, “Turkey is approaching Gulen’s extradition as a political bargain(ing tool), ignoring the U.S.’ insistence that it is a legal matter regulated by a bilateral treaty. Tensions around the sanctions violation probe into Halkbank and American support for the Kurds in Syria have also fueled distrust from Turkey.”

Could any nation-state actor or organization help foster an easing of the diplomatic pressure?

NATO allies should step in to cool Trump’s and Erdogan’s escalating hostility to achieve an amicable détente, but toeing the line considering there’s a simultaneous, paramount issue calling their attention: Trump’s expected decertification of the U.S.-Iran nuclear deal this week, which is also folly, experts have argued.

Russia and China could play a crucial role on the UN Security Council of calling out the two, bringing them to heel, but the two countries won’t fall over themselves making that attempt because the row benefits them diplomatically, strategically and economically. 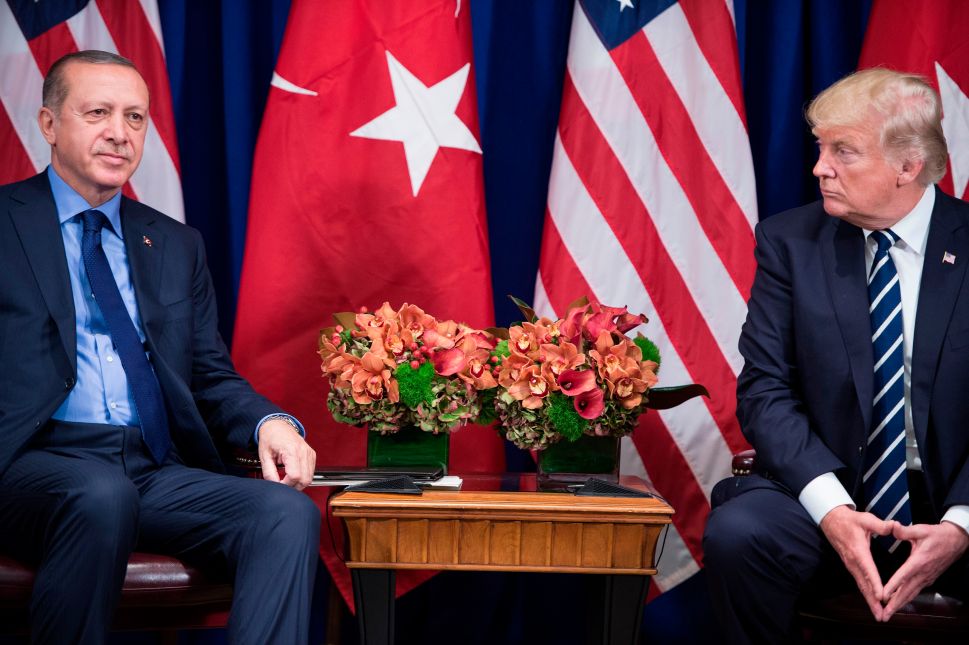