The decision of hundreds of NFL players to “take a knee” during the National Anthem has added football to the list of things that now divide America. While many support their right to peacefully protest, President Trump, along with almost half of all football fans, criticize the NFL for allowing players to protest during the anthem.

There is no easy answer to the controversy, but the U.S. Supreme Court’s 1943 decision in West Virginia State Board of Education v. Barnette provides powerful insight into the intersection of the First Amendment and the flag’s sacred place in American culture. In this landmark First Amendment case, the court held that forcing students to salute the flag and pledge allegiance was unconstitutional.

Students’ Refusal to Salute the Flag

The case involved a resolution enacted by the West Virginia State Board of Education that mandated that the salute to the flag become “a regular part of the program of activities in the public schools.” It required all teachers and pupils to participate and provided that the refusal to salute the flag would be considered an act of insubordination. Students who did not salute the flag were subject to expulsion, and their parents could be fined and jailed.

Jehovah’s Witnesses follow a literal version of Exodus, Chapter 20, verses 4 and 5, which says: “Thou shalt not make unto thee any graven image, or any likeness of anything that is in heaven above, or that is in the earth beneath, or that is in the under the earth; thou shalt not bow down thyself to them nor serve them.” They consider the flag an “image,” and therefore, refuse to salute it. In accordance with their family’s religious beliefs, Marie and Gathie Barnett, who attended Slip Hill Grade School in West Virginia, did not salute the flag or recite the pledge. After they were expelled for their refusal, their parents filed suit.

By a vote of 6-3, the Supreme Court concluded that compelling public school students to salute the flag violated the First Amendment. The court’s decision overruled Minersville School District v. Gobiti, a 1940 opinion in which the court had upheld a mandatory flag salute. This time around, the justices rejected the notion that the state’s interest in patriotism and “national cohesion” trumped individual rights, such as freedom of expression.

As Justice Robert Jackson famously wrote on behalf of the majority:

“If there is any fixed star in our constitutional constellation, it is that no official, high or petty, can prescribe what shall be orthodox in politics, nationalism, religion, or other matters of opinion, or force citizens to confess by word or act their faith therein. If there are any circumstances which permit an exception, they do not now occur to us.”

In his opinion, Justice Jackson further highlighted that coerced acceptance of any patriotic creed is rarely successful, noting that “struggles to coerce uniformity of sentiment in support of some end thought essential to their time and country have been waged by many good, as well as by evil, men.”

“Ultimate futility of such attempts to compel coherence is the lesson of every such effort from the Roman drive to stamp out Christianity as a disturber of its pagan unity, the Inquisition, as a means to religious and dynastic unity, the Siberian exiles as a means to Russian unity, down to the fast failing efforts of our present totalitarian enemies. Those who begin coercive elimination of dissent soon find themselves exterminating dissenters. Compulsory unification of opinion achieves only the unanimity of the graveyard. It seems trite but necessary to say that the First Amendment to our Constitution was designed to avoid these ends by avoiding these beginnings.”

Whether it’s refusing to salute the flag or stand for the National Anthem, it is understandable that the rejection of our national symbols makes people uncomfortable. However, under the U.S. Constitution, that is not a sufficient reason to compel such actions. “But freedom to differ is not limited to things that do not matter much. That would be a mere shadow of freedom,” Justice Jackson wrote. “The test of its substance is the right to differ as to things that touch the heart of the existing order.”

The essence of our Bill of Rights is that the government must allow its citizens to make their own choices about whom and what to believe. “To believe that patriotism will not flourish if patriotic ceremonies are voluntary and spontaneous, instead of a compulsory routine, is to make an unflattering estimate of the appeal of our institutions to free minds,” Justice Jackson wrote. 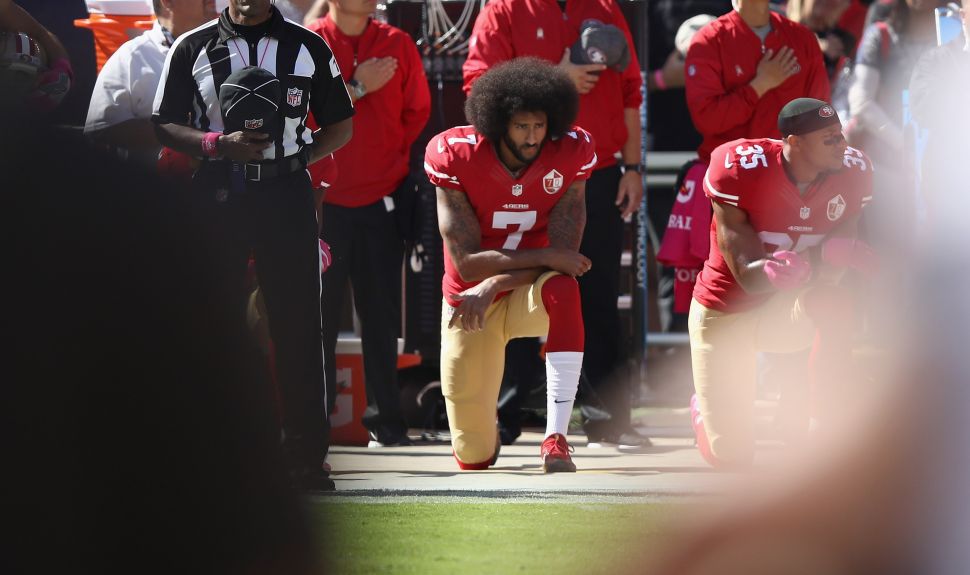