At over 16 years in duration and roughly $1 trillion in cost, plus 6,900 U.S. dead, the War on Terror is the longest foreign entanglement in American history, and the conflict that kick-started it—our seemingly endless war in Afghanistan—remains its most vexing challenge. In Afghanistan, mere defeat of the enemy is not the endgame.

Until that underdeveloped, mountainous country has a functional government that controls its entire territory, or at least the lion’s share of it, the threat from the notorious Taliban will not subside. Our efforts to reconstruct the country, which was ravaged by more than a generation of battles and chaos that began with the Soviet invasion in 1979, commenced just six weeks after the Twin Towers fell. America’s Afghan war began with quick battlefield victories that were soon followed by slow and painful rebuilding. Afghanistan is both the longest war and most ambitious reconstruction effort in American history.

Central to this effort is building a reliable police force that can establish and maintain law and order. Without one, the country’s descent into lawlessness—or worse, the hands of the Taliban—is preordained. On Afghanistan’s security sector alone, the U.S. has spent $120 billion dollars—not including the costly Western infrastructure needed for the operation. When the U.S. began its mission, the Afghan police force was largely predatory, a corrupt entity that exploited and stole from citizens. Where it wasn’t a malign influence, it was nonexistent. In effect, the U.S. built a police force from the ground up, and this multi-decade undertaking continues today.

But traditional it is not. Instead, the U.S. has created a paramilitary force focused on counterinsurgency—not law and order. And therein lies the problem. The U.S. State Department was originally tasked with building the Afghan National Police (ANP), but because the agency was ill-equipped to perform this function in an active war zone, the Department of Defense assumed the responsibility in 2005. The U.S. military began training the ANP in its area of expertise, thus shifting its focus nearly entirely from anything resembling policing. As Brookings Institute Senior Fellow Dr. Vanda Felbab-Brown told Observer, “The military trained the ANP to do what it knows how to do—which is not how to do crime and street policing, but how to do military exercises.”

The Obama administration’s desire for complete U.S. troop withdrawal inadvertently cemented the militarization of the Afghan National Police. As the Special Inspector General for Afghanistan Reconstruction (SIGAR), the U.S. government’s leading oversight authority on Afghanistan reconstruction, reports, “Under the U.S. counterinsurgency strategy, the role of the ANP in security operations became more prominent… In this role, the ANP served on the front line against heavily armed insurgents.” Serving as the “hold” function in the U.S.’ “clear, hold and build” COIN strategy, the police were tasked with holding territory cleared by U.S.-Afghan military operations.

Former commander of the International Security Assistance Force General John Allen, who led U.S. and NATO operations in Afghanistan from 2011 to 2013, told Observer of the role of the police in counterinsurgency, “I wanted the army to be the leading edge, and I wanted the Afghan police to be the trailing edge.”

This approach meant the West armed the Afghan National Police as light infantry, with AK-47s, light machine guns, and military standard light combat vehicles, making them a fully paramilitary force. The police were then stationed in remote posts, tasked with keeping terrorists at bay and stabilizing the area.

The urgency of the U.S.’ mission to fight an active insurgency and train a security force to do the same—all while support for the war waned at home—was and remains difficult to overstate. “I needed everyone who could fight to fight,” Allen explained. “I didn’t have enough army, and I certainly didn’t have enough police, but if I lost to the insurgency, then I lost everything.”

Forming a professionalized constabulary, though a stated long-term goal, took a distant backseat to the desperate need to stave off battlefield reverses. Though its efforts are admirable, the U.S. military is simply not trained to build and manage a police force. SIGAR’s John Spoko noted the Pentagon is so tragically ill-equipped that some U.S. military members watch Cops and NCIS to try to figure out what to teach the ANP.

This shift in mission for the ANP to become, as Felbab-Brown put it, a “light counterinsurgency force” was so controversial that the Europeans, who were involved for well over a decade, ceased their contributions to the mission on December 31, 2016, citing that the Afghan police were “increasingly focus[ed] on fighting insurgents rather than traditional police work.”

Head of EUPOL Afghanistan Pia Stjernvall said of the situation, “When 70 percent of policemen are still fighting the war, it’s quite impossible for them to concentrate on doing policing.”

The consequences of the police focusing on counterinsurgency are dire and have produced an environment ripe for Taliban exploitation. “ANP being focused on countering the Taliban is ultimately a short-term and problematic decision because it doesn’t address a core function of the state, providing security from crime,” Felbab-Brown told Observer. “It allows the Taliban to outperform the government in delivering this crucial service.”

The Taliban’s threat is two-fold and pernicious. In districts that are contested or under its control, the Taliban provides the essential state function of security. The group’s initial takeover of the country in the mid-1990s was partly propelled by its ability to bring law and order, however harsh, to Afghanistan’s lawless regions.

Yet in areas under Afghan government control, the Taliban does the opposite: It takes advantage of the ANP’s weakness at policing by committing rampant crimes. Sometimes the Taliban functions more as a criminal syndicate than an insurgency, and in addition to robberies, theft and murder, kidnappings for ransom are also on the rise. The Asia Foundation reports that in 2017, 71 percent of Afghans said they feared for their safety sometimes, often or always—a 31 percent increase since the survey began in 2006. Whether an area is under Afghan government control or not, the ANP’s status as a paramilitary force focused on counterinsurgency rather than policing empowers the Taliban.

The ANP’s function as a vital “hold” force is also showing signs of distress. As of October 2017, the Afghan government controlled only 57 percent of Afghanistan, a number that has steadily declined over the last two years. Meanwhile, according to the United Nations, armed clashes in Afghanistan are at an all-time high. The police “are hugely vulnerable and often not capable of performing the task,” Felbab-Brown said.

And it’s not just the police that were nonexistent when Americans arrived on the scene in 2001—the entire justice system needed a complete overhaul. Afghanistan’s Ministry of Interior, which has jurisdiction over the ANP, was corrupt from top to bottom, even by local standards. As recently as this year, Afghan President Ashraf Ghani called the MOI the most corrupt institution in the country.

In addition to ANP and MOI corruption, judges tasked with sentencing those found guilty were mostly able to be bought off. Prosecutors and judges often relied on confessions instead of evidence, thereby engraining torture as a legitimate element of the Afghan legal process, according to General Allen, who sought to reform the entire system. Most detention centers were so out of control that they were de facto run by the prisoners sent there to serve their sentences.

Though maintaining order is vital to even the most basic of societies, not to mention a cornerstone of any effective counterinsurgency, Afghanistan’s force tasked with asserting the rule of law is unable to do so. Moreover, the ANP’s shortcomings aid the very insurgents trying to topple the government. Fighting on the front lines, not policing, remains the primary mission of the ANP, a predicament that seems impossible to repair at present. And as long as basic security for the population is inadequate, the Afghan government will not be able to stand on its own and the U.S. will likely remain engaged in that troubled country militarily.

Approaching the two-decade mark, much progress has been achieved in transforming Afghanistan into a law-based state, but much more is needed. Though the Obama administration was intent on achieving full withdrawal of U.S. troops, the Trump administration appears prepared to commit the resources necessary for victory—or at least to forestall strategic defeat. And in this case, victory is not just defeating the Taliban; it’s providing Afghanistan the wherewithal to defeat the insurgency on its own long after foreign troop withdrawal, a daunting task.

Transforming an entire society and its security sector is a generational undertaking and has at times seemed out of reach to Americans eager for their troops’ return. But with an active insurgency that won’t stay defeated—the very insurgency that Americans have been trying to wipe out since October 2001—the U.S. remains steadfast in its commitment to Afghanistan until the Taliban is administered its final blow.

America’s longest war has been a complicated endeavor and ultimate victory over the Taliban remains uncertain, but asked if he is optimistic that the U.S. will achieve its goal of building a viable security force in Afghanistan, General Allen—the man once tasked with doing so—said, “If our goal is an end state, which would be a measurable means for success, as opposed to an end date, then I think we can do it. I think we can do it.” 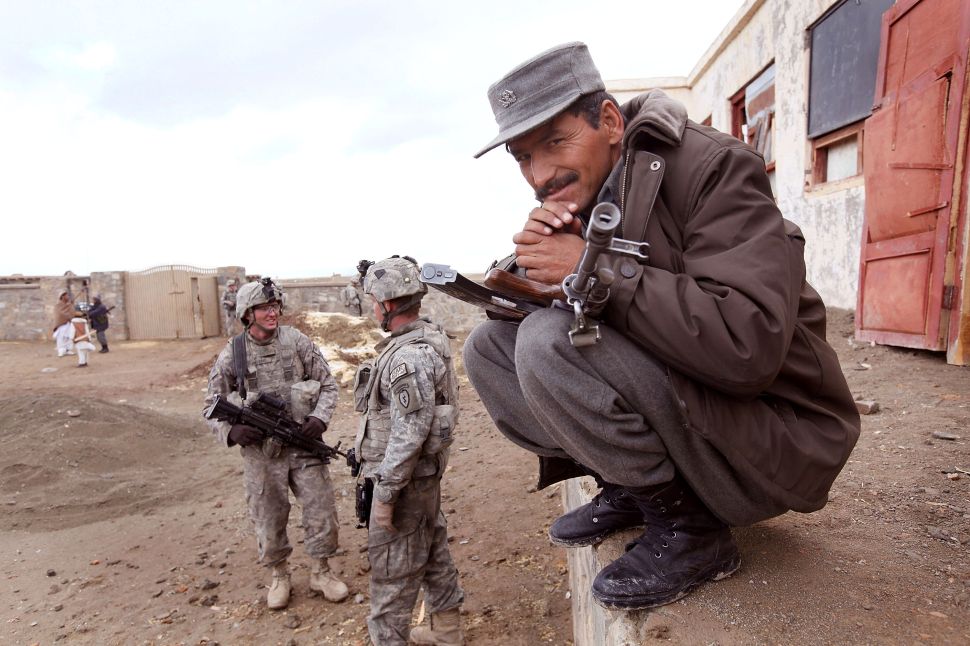