For almost two decades, Brazilian artist Maria Thereza Alves has been traveling to European port cities documenting the non-native plant species she finds there. Her work is less horticultural than ethnographic, however. The project represents original research into the seeds that have been transported across seas in ballast, a material (often gravel, sand or coarse stone) used to balance maritime trade ships. Ultimately, this project reveals the impact of human displacement due to migration and slave trade over the course of centuries.

After exploring the shores of Marseilles, Reposaari, Dunkirk, and Bristol, among others, Alves has now turned her attention to the “New World” by bringing this ongoing project to the U.S. for the first time. She’s been working with the New School’s Vera List Center for Art and Politics, Pioneer Works, the High Line and Weeksville Heritage Center to excavate seed sites around New York City. The artist’s findings of plant species that were originally native to countries like the West Indies, Brazil, and the U.K. are presented with her maps and drawings depicting the ships’ journeys in an exhibition of the same title at the Vera List Center through November 27.

Alves told Observer that her research revealed that so much ballast came into Manhattan, it was used to fill in the city’s ravines, marshes, creeks, ponds and other “undesirable” local topographies from 1646 until the middle of the 20th century. For example, she found that Eighth Avenue from about 155th to 140th Streets was filled in with an average of seven to ten feet of ballast with seeds hailing from the Sweden, Ireland, Algeria, the West Indies, Norway, Sierra Leone, Spain, Portugal, Antigua, France, Cape Verde, Germany, Bermuda, Brazil and of course, England. “So when we are walking around, due to the colonization process of our land, we don’t know if we are stepping on New York or Bristol, Kingston, Lisbon, Rio de Janeiro, or Oslo,” she explained.

Unique to the artist’s New York-based findings is the discovery that while solid ballast like sand, earth, and stones gave way to the use of ballast from the early 1920s onwards in European cities, such was not the case in America. According to Alves, ships sailing from New York harbor to Europe during World War II to deliver armaments returned heavy in ballast back to New York as there was nothing else to bring back.

“Many chunks of Europe ended up in New York and many chunks of New York ended up in Europe over the last several hundred years and even more recently,” said Alves, who explained that she found the deliberate midcentury “displanting” of New York quite shocking. This continued until the end of the Marshall Plan, which saw ships carrying food and building materials to devastated Europe until 1951. “This isn’t a question of reconstruction of a lost landscape or purity, but an acknowledge the present coloniality we all find ourselves in.”

The project is a natural fit for the New School’s politically engaged Vera List Center, who awarded Alves the Vera List Center Prize for Art and Politics last year. But, for Alves, it was equally important to loop in additional organizations. “Seeds of Change has from the beginning been about involving the local community with the history of the ballast flora,” she said, noting that Pioneer Works, located in Red Hook, is situated on an area made of ballast landfill which has grown much of ballast flora that will be exhibited in the Vera List Center’s galleries.

For the High Line portion of Seeds of Change, Alves worked with plants that are found in the Western Rail Yards, an area that is still populated only by plants that were growing here after the railway was abandoned. “This project touches on one of the most important collaborations for us: the relationship between art and horticulture, and the ways in which both of these things can tell us stories about the histories of the city we live in today,” Melanie Kress, assistant curator of High Line Art, told Observer. “In this way, Alves is illuminating part of the history of the park and the neighborhood within the larger narratives about trade, colonialism, and slavery.”

The history of slavery in the West and the larger African diaspora is a point to which Seeds of Change routinely returns in its many iterations over the years, and for the New York edition of the project, Alves aptly chose to work with Brooklyn’s Weeksville Heritage Center. Named after James Weeks, an African American stevedore and former slave who purchased a plot of land in 1838 and founded one of the first free black communities, the institution “is a witness to the complexity of the history of ballast in New York,” said Alves.

According to Rob Fields, interim president and executive director of the Weeksville Heritage Center, Seeds of Change isn’t just about the migration of seeds and flora, nor does it stop with abolition of slavery. “Migration is also a recurring theme for many African-Americans,” he told Observer. Indeed, African Americans fanned out all across the country after Reconstruction to seek a life free from the oppression of the Jim Crow South. “It’s that search for haven, for community, and for a new start that brought the founding residents of Weeksville together: free African-Americans and formerly enslaved African-Americans alike,” he said.

Fields is quick to point out that the project has a special relevance for New York City, which is a city of transplants. “Of course, there are plenty of people who are born and bred New Yorkers, but it’s the transplants who came here, had something to prove—that they could make it here—that have really found ways to thrive,” he said. “Like the flora contained in those seeds, at some point, we all became natives.” 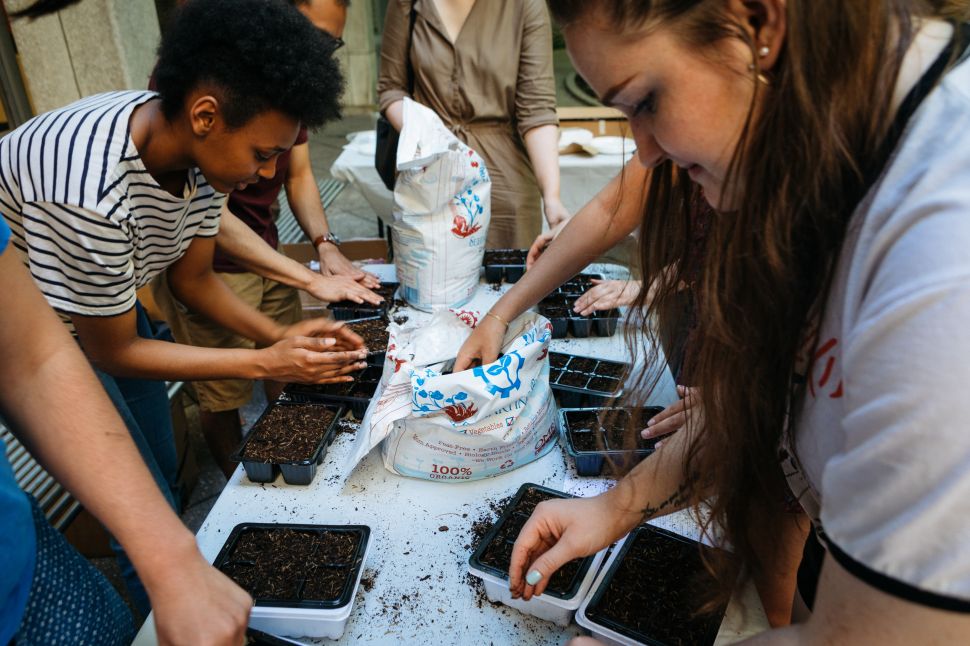