When Los Angeles-based artist Rafa Esparza started making adobe bricks in 2012, he wasn’t that interested in the mud and hay mix as artistic medium. He wasn’t even interested in using the bricks to build something tangible. Instead, he was more concerned with rebuilding a relationship with his father.

“I had just come out, and my dad was having a hard time accepting that,” Esparza told Observer. His father, originally from Durango, Mexico, had built his first home himself out of handmade bricks. For him, Esparza explained, adobe represented not only a material by which one could construct a home, but also a way of earning a living and providing for a family. “I thought that I could reconnect with his through adobe brick making. It was the first step toward mending our relationship—he became an educator to me rather than just a patriarch.”

Now, with his relationship with his father restored, Esparza is using adobe to remodel Ballroom Marfa, a non-profit art space in Marfa, Texas. Over the summer, the artist spent a three month-long residency on site where he created an installation composed of adobe bricks to reshape the building’s facade and interior. “I wanted to highlight the unseen labor of brown bodies,” Esparza said. The resulting exhibition, Tierra. Sangre. Oro., on view through March 18, 2018, is complemented by a performance and sculptural work from Esparza alongside collaborations and contributions from artists Carmen Argote, Nao Bustamante, Beatriz Cortez, Timo Fahler, Eamon Ore-Giron and Star Montana.

According to the artist, the response to his brickmaking activity in Marfa, where adobe is commonly used in architecture both old and new, was overwhelming. “People would drive by as we were working and stop to have conversations with us as we were making the bricks. They would tell me their stories of making bricks themselves, or those in their family who had. How this was an important form of work to them,” he said, noting how many passersby said they still traveled to and from the U.S. from Mexico to find work.

That adobe brickmaking is a skill that transcends both generations and borders is a key aspect of Esparza’s Marfa project. This week, he is spending time with local junior high and high school students to pass along his newfound masonry skills learned from his father. The bricks will then be added to the installation at Ballroom. “I wanted these kids to feel like their work, even if it was something as simple as bricks, could potentially exist alongside the work of other artists,” he said.

As quotidian as adobe bricks may be, Esparza realized that the material—and the people who have traditionally made and used it—were abstracted from it in Marfa, perhaps best known as a West Texas outpost of creativity thanks to minimalist master Donald Judd’s Chinati Foundation. “Marfa has a large Latino population, yet when I came here, I was taken around to see the sites, I toured Chinati, and it wasn’t any different from anything I’d seen in Los Angeles or New York—it was just more of the same lack of diversity in art institutions,” Esparza said.

The underrepresentation of work by Latin American artists—especially queer brown artists in general—in major art museums and organizations is an issue that the artist has returned to more than once. Of the nearly 3,000 bricks that are currently installed at Ballroom, 500 were brought from the Whitney Museum of Art in New York where they had formed a rotunda in this year’s biennial as a way out of “building up a space out of brown matter” for brown people. These bricks were made of mud from the Los Angeles River, while an additional 400 were made by a brick mason who has been working in Chihuahua, Mexico, for the last 40 years.

The migration of soils from across the country and across the border was important in this iteration of his brickmaking, according to Esparza. Indeed, he says that he thinks of Tierra. Sangre. Oro. as an “idea of a Brown laboratory,” where he can think and work together with his precedents, peers, and pupils. “I may not often see my own body or culture reflected back to me in institutions,” the artist said, but by reframing these existing architectures with his hand-hewn adobe, he hopes that he can reorient how and what we see in these spaces—both literally and figuratively. 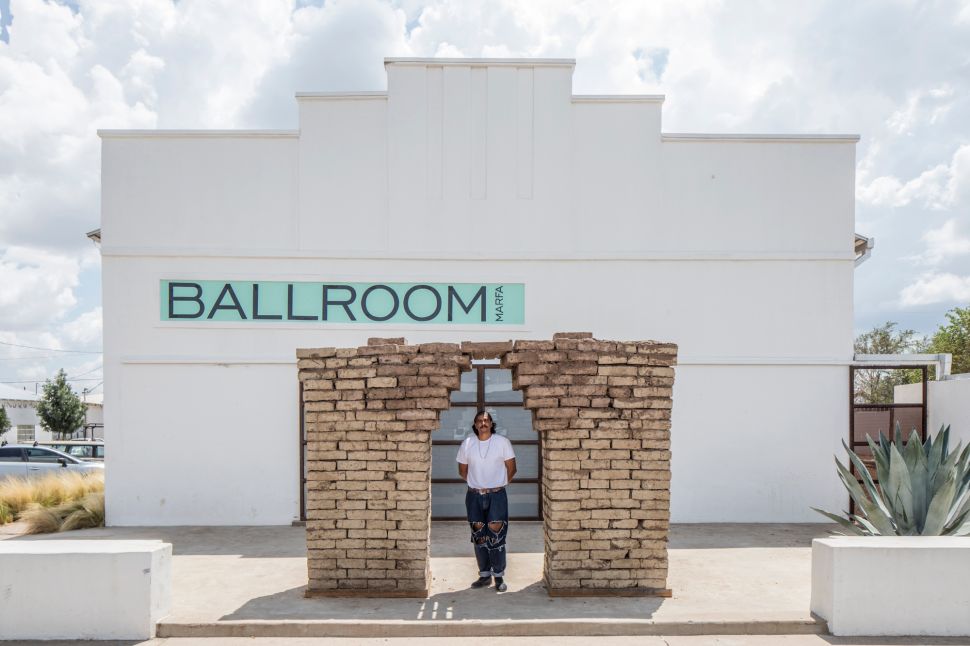