When I started writing about cars in those golden years before it was determined that Takata airbags, Volkswagens, truck underrides and cellphones would kill us all, the guys on the circuit would often discuss obscure cars that they had driven. I had no idea what they were talking about. To me, a Lotus or a Morgan might as well have been a Lipizzaner stallion. I owned a Prius and a 1998 Nissan Sentra. That, plus my boyhood AMC Concord and the old Saab my wife owned when I met her, comprised the extent of my car experience.

Alfa Romeo certainly fit the bill of an obscure but vaguely familiar name. As far as I was concerned, it might as well have been a motorcycle or bicycle brand, the name of an obscure 1980s synth-pop band or some sort of gnocchi. The idea of actually driving an Alfa Romeo had never occurred to me.

Now Alfa Romeo has returned, coming back to North America after a hiatus between 1995 and 2015. The brand is owned by Fiat Chrysler Automobiles, which means that when you drive an Alfa Romeo you’re actually driving something resembling a Fiat or a Chrysler. At this point, I’ve driven all three brands, and if I had to choose (unless you’re talking about the electric Chrysler minivan), I’d definitely choose the Alfa Romeo.

The first car in Alfa Romeo’s resurrection was the Giulia sedan in 2015. The car press said, “We greet the Giulia with a hearty ‘Ciao!’” while acknowledging that it was basically a fancy Fiat, which meant it had the potential to fall apart at any moment, like the cars used in old Laurel and Hardy movies.

However, the second model of the revival, an SUV called the Stelvio, has been much better received. It’s got the decent driving dynamics of the Giulia without the feeling that Fiat built it from a kit. I drove the Stelvio a couple of weeks ago and had a good time.

The Stelvio I used was the TI Sport AWD, which meant it has all-wheel drive and two-liter, direct-injection turbo capability, otherwise known in car speak as an “engine.” It has eight-speed transmission, silver brake calipers and 19-inch aluminum wheels, striking quite a pose in my driveway next to my old Nissan.

I put in a lot of miles the week I had the Stelvio, which is named after a famous Italian mountain pass. While I didn’t drive it up any hill steeper than one leading to the local Jewish Community Center, I enjoyed every minute behind the wheel. It accelerated crisply, steered precisely, braked on a quarter and handled any three-point turn I tried with great efficiency. It’s more common than it used to be for an SUV to drive like a smaller car, but when it comes to the Stelvio, that’s literally the entire reason it exists. It resembles the Alfas of old only because it has the brand’s snake badge on the hood. But the legend that Alfa Romeo is actually a driver’s car appears to be true.

This isn’t Cassino, Italy, in 1972, where drivers’ cars belched lead into the country air. But the Stelvio still wastes gas, with a combined 24 city/highway MPG. That’s simply not good enough, and evokes the wrong kind of nostalgia. That aside, this Alfa has all the modern amenities, such as remote stop-start, rain-sensitive windshield wipers and hill descent control. In addition, Fiat Chrysler appears to have caught up with the pack in terms of driver’s assistance features, with excellent advanced cruise control functions and lane departure warnings that rival any of its competitors.

While those features should come standard in a car of any price, in the Stelvio, they’re part of a “Dynamic Plus Package,” which sounds fairly obscene and costs $1,500. In fact, there were tons of add-ons in the car I drove, including a $2,500 Sport interior-exterior combo, which didn’t add much. I appreciated the heated leather seats, but the inside of the car felt a bit rubbery and cheap compared with comparable vehicles from Audi or Lexus.

The base price of the Stelvio is $43,995, but the one I drove was listed at $53,640. That takes it from semi-unaffordable to pretty unaffordable. Maybe the add-on packages should just be called “hidden figures.”

Regardless, now I can cross “driven an Alfa Romeo” off my nonexistent bucket list. Can a bungee jump be far behind? If that’s the case, I just hope they don’t add a quarter of the cost of the jump onto the list price, even if it does include a “power adjustable bolster” and “bright aluminum pedals.” The Stelvio is very sporty, but that’s not very sporting. 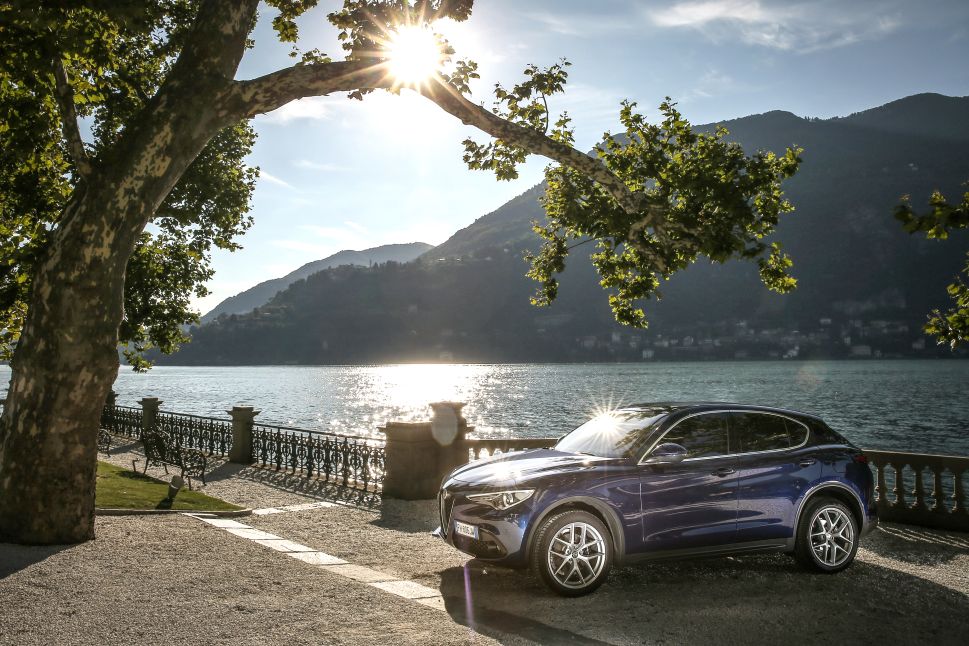