While Thanksgiving has been celebrated in some way, shape, or form in America since the first colonial record of it in October 1620, it wasn’t until 1863, smack in the middle of the Civil War, that Abraham Lincoln declared the last Thursday of November a national holiday of “thanksgiving and praise,” in an effort to bring the country together. In the spirit of the holiday, we’ve compiled 10 works from the last 150 years of art that express the many pleasures and pains of America’s favorite day of annual overeating.

Home to Thanksgiving, 1867
John Schutler for Currier and Ives

Currier and Ives was one of the foremost printing establishment in the 19th century, publishing over 7,000 hand-colored lithographs between 1834 and 1907 that explored Americana in all its glory. Home to Thanksgiving, by artist John Schutler, was one of its most popular prints, depicting a young, well-dressed man returning by fancy coach from his big-city job to his parents’ idyllic country home for the holiday feast.

Enjoy the smells, tastes, and chaos of today!

Lee, one of the most successful female painters from Depression era, managed to capture in this work the most ubiquitous Thanksgiving Day experience imaginable—a kitchen in chaos. The artist’s exaggerated style was condemned when the painting was first shown, but the hustle and bustle—and underfoot pets seeking scraps—hardly seems overstated based on our first-hand experience.

As you lug your 25-pound frozen turkey home from the grocery store with nary a worry besides hoping it thaws in time for Thursday, remember the days when one had to awkwardly chase a live bird around a pen in the frigid November air, as aptly depicted in this painting by folk artist Anna Mary Robertson Moses, better (and more endearingly) known as “Grandma Moses.” (See the painting here.)

Rockwell’s Freedom from Want is perhaps one of the most iconic depictions of an American Thanksgiving ever made. It’s probably also one of the most idealized visions of a turkey day dinner ever made, as evidenced in the sheer number of smiles—and conspicuous lack of bickering—among family members gathered around the table. The painting was part of series inspired by Franklin D. Roosevelt’s 1941 State of the Union Address in which the president outlined the freedoms Americans should be thankful for: freedom of speech and worship, and freedom from want and fear.

Inspired by an advertisement for turkey in a grocery story circular, this gobbler is the perfect Pop Art rendering of a well-browned bird. The artist also reproduced this image on a canvas bag three years later for the 1964 exhibition “American Supermarket” at Bianchini Gallery where he sold them for $12 each. They now fetch about $3,000 at auction.

Thousands of people flock to the streets of Manhattan to watch the annual Macy’s Thanksgiving Day Parade, with even more tuning in to watch the event’s signature oversized balloon animals bop down Fifth Avenue on TV. Born in Knoxville, Tennessee, in the early 20th century, Delaney produced scenes of street life and celebrations throughout his life—notably parades—especially after he moved to New York City in 1930, where he came to study under Thomas Hart Benton. Like many other black artists at the time, he was often excluded from gallery and institution exhibitions, but he took to the streets that inspired his painting to display his work, showing in Washington Square for nearly 50 years. Delaney’s vividly colored Macy’s Parade captures the excitement and exuberance of Manhattan that he adored, particularly on turkey day.

Self-taught, Oklahoma-born artist Taylor draws on his  Blackfeet, Cherokee, Osage, Crow, Scottish, and Black Dutch heritage to create his paintings that often depict Native American figures while incorporating elements of Surrealism and Magic Realism. His portrait of a chief holding a bull’s skull—rather than a turkey—stuffed with herbaceous greens and adorned with a small butterfly may not seem overtly holiday themed, but the title makes the connection explicit, perhaps offering a reminder that turkey day should be inclusive of all people who call this land their home. (See the painting here.)

There are several aspects of Currin’s scene of three women gathered around a kitchen table preparing a Thanksgiving feast that are a bit unreal: the subjects’ excessively long necks (not unlike a turkey’s, perhaps), the vase of roses that most certainly get in the way of actually doing any prep work and the marble Corinthian columns in the background that probably wouldn’t be found in an average American home. But the unmistakable pallid luster of an uncooked bird and the sickly pink juices that gather on the plate underneath it? The artist got those just right.

Everyone loves a good nap on the couch after a big turkey dinner and this candid shot of the artist’s mother and daughter captures the intergenerational intimacy of a tryptophan-induced snooze. Once a landscape photographer, Beahan turned her focal point indoors when her 89-year-old mom quickly developed dementia and the photographer documented the last years of her mother’s life with the stoic yet poetic style depicted in this image.

It’s estimated that Americans slaughter roughly 46 million turkeys annually for their Thanksgiving Day feasts. For Cheryl Miller, however, it’s these birds of honor that should be feasting. For the past 18 years she has painted turkey portraits on Thanksgiving day. But in 2013, after spending time on a no-kill farm that fed turkeys pumpkin pie and cranberries on their day of honor, she started a social project to commemorate all of the turkeys destined for holiday tables in a single year, inviting the public to make and submit a mini portrait of every single one of the birds. The project is still going strong, and the artist recently showcased some of the latest gobbler portraits at New York’s Dun-Well Doughnuts. 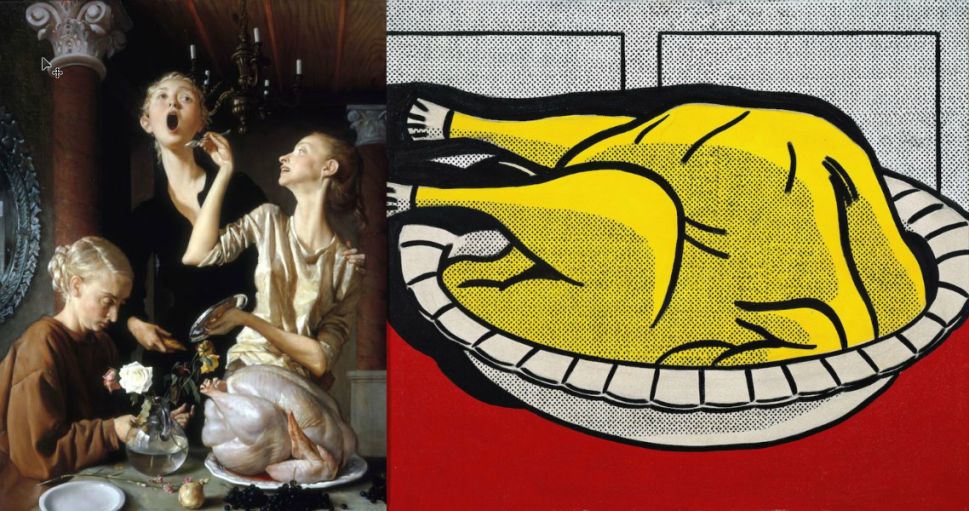