When Hurricane Maria made landfall on September 20th, it brought total devastation upon U.S. territory Puerto Rico. The category 4 storm was the worst to hit the island in nearly a century and left its 3.4 million residents stranded without basic necessities like electricity, and food.

Having chipped in after Hurricane Harvey ravaged Houston and an earthquake rocked Mexico City, Bethenny Frankel sprang into action. The scrappy, no-nonsense star of The Real Housewives of New York famous for catch phrases like “Get off my jock!” is of unique talent for disaster relief: not only is she well-connected due to her celebrity status, she is an entrepreneur through and through. Frankel famously crafted her Skinnygirl Cocktail empire from asking a bartender for a drink she liked (clear tequila, fresh lime juice, and a tiny splash of triple sec), coining the term, and later selling it for a whopping $120 million dollars. This fact about her—that she is a savvy, ambitious business woman—draws fans in by the droves.

Frankel told Observer about her decision to go to Puerto Rico shortly after the hurricane: “Everyone was telling me, ‘You can’t go there. There’s no , no food, no nothing. And it’s an island. How are you going to get there?’ So that’s how I decided to start flying planes.”

In 2016, Frankel founded B Strong, which aims to provide women with emergency assistance. She partnered with nonprofit Dress for Success, thus immediately maximizing the contributions she is so adept at raising by capitalizing on their existing infrastructure. Under this framework, she provided for Houston’s and Mexico’s needs, but she found it simply unable to meet Puerto Rico’s seemingly unending urgencies.

Not one to be deterred, Frankel says, “In Houston it was more about clothes and cash cards, but in Puerto Rico people had no … It was like Phase Zero.” She continues, “After Houston I wanted to look more into disaster relief, and I wanted it to be more first-responder, real crisis. So I said, ‘Okay. What can I do?'”

Worse yet, Puerto Rico posed a whole new obstacle: “Puerto Rico is an island, so there’s really no where to get relief unless it’s flown in or on a boat, and it’s very complicated to get cargo in.”

Rather than staying home and feeling “helpless,” Frankel began tweeting her 1.59 million followers and calling everyone she knew. Not long after, she found momentum and the snowball effect took hold.

She describes, “I chartered the first plane and was going to fill it and then I got in contact with a charity called Global Empowerment Mission and WeDoBetter.org, and they were able to load the plane. So then I had people who could load the plan, and then I met this woman from Dallas who was connected in Puerto Rico, and we were able to unload the plane.”

At first when she asked her famous and wealthy friends for money and planes, she was hit by a resounding and disheartening “no.” But after people saw her project was feasible because Frankel was going to make it feasible, aid came in droves. She soon had two planes, three planes, four planes—and now she has sent 54 planes in and out of Puerto Rico. Inbound flights carry supplies like meals, bottled , diapers, and medical supplies, and outbound flights carry mostly people who need immediate medical assistance.

Which is where her Twitter account comes into play. Calling it her “chatroom,” Frankel’s efforts are conducted mostly on the platform. People tweet her that they have supplies or that they need supplies, to which she typically responds something like “Where?” Sending dozens of logistical tweets a day (lightly sprinkled with requests of a badly needed spa visit), it is clear that Puerto Rico is all Frankel has thought about for weeks on end.

She also uses the platform to get in contact with corporations, like Jet and United. For Frankel, efficiency is and has always been key: “Most of the time when I reach out people say no, but then I just thank them then and there so I don’t have to go back and do it. It’s like thank you cards after a wedding. You have to go back and thank people, but I just did it then and there. So I have this massive log of everything I asked for from everyone.”

Frankel took a no-holds-barred approach, asking everyone she could think of to contribute. She joked on Twitter that she couldn’t so much as ask for a glass of water from anyone after this. Indeed, not even disaster can shake her knack for comedy. She once tweeted, “LOL the only donation #BStrong had to turn down is a woman offering 200 oz of her breast milk. #blessherheart (i mean boobs) #PR911.”

The result of Frankel’s digitally-built community and unrelenting work ethic? A ragtag army of do-gooders who have delivered four million pounds of aid and have another six million pounds ready to go.

But it has been over a month since Hurricane Maria hit Puerto Rico, and Frankel is careful to note that the situation is still dire. She mentions more than once that Puerto Rico is in “Phase Zero” of its recovery. For example, she gives out cash cards so that people can buy the customized relief they need, even though she knows most stores aren’t open. With 75 percent of the island without electricity, people are still in desperate need for the basics, like food and potable .

So she is currently working on collecting all this aid in a warehouse in Miami and sending it to Puerto Rico via cargo ship, a feat laced with hundreds of logistical obstacles. By her estimates, such a ship would hold $50 million dollars worth of aid.

According to Frankel, there is no exit strategy in sight. She is still working tirelessly, having lost six pounds and countless hours of sleep.

But what keeps her going is seeing how she is able to provide for people in the most awful of conditions. Asked if she feels she has made a difference, she says, “Yes. I think so. I certainly hope so. We’ve just helped so many thousands of people and given so many supplies out.”

In a beautiful and unexpected twist, Frankel seems too humble to take into account the difference she has made in the lives of her fans that aren’t in Puerto Rico. More of a hustler than a housewife, Frankel has always been her shows’ aspirational figure, but by coordinating her efforts on a public platform, she has shown her legions of fans what one inspired person’s commitment can achieve. 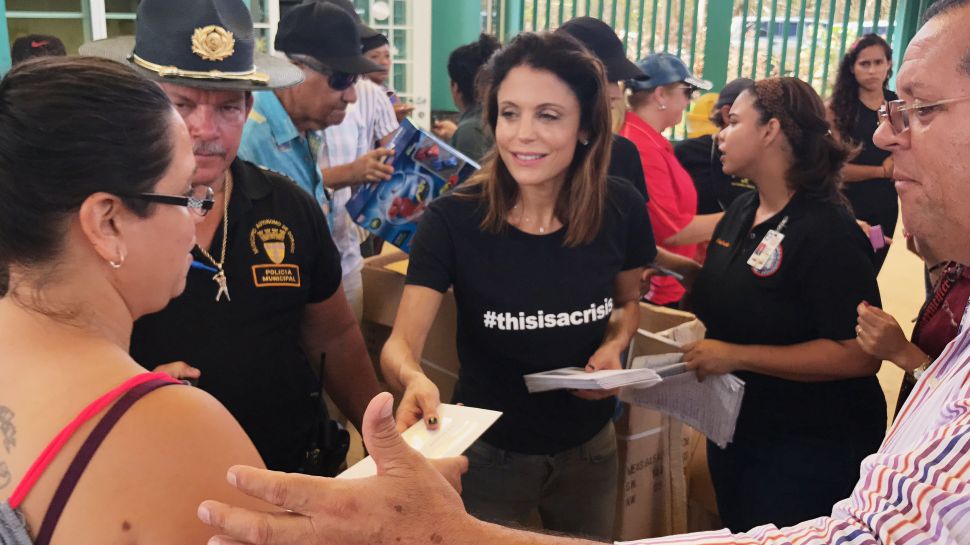