The feverish, high-velocity energy of John Leguizamo is back on Broadway, and his new one-man comedy riot Latin History for Morons, at Studio 54, has the thankless task of trying to channel, control, contain and communicate it in one hour and forty minutes without an intermission. It can’t be done, because just when you think he might pause to take a vocal break, wolf down a valium, and allow you, simultaneously, to inhale, he’s off at breakneck speed to tackle another topic. It’s a stream of consciousness that would wear out William Faulkner, Puerto Rican style. He moves faster than Chita Rivera.

Born in Bogota, Colombia of Puerto Rican, Italian and Lebanese descent, this self-described Ghetto Klown (as he titled his autobiographical play) is more than qualified to share a lot of knowledge about everything Hispanic, including a few facts he seems to be making up as he goes along. In the event that he needs to look up a date or a name from latino culture or history, the cluttered stage is filled with reference books that make it look like a library hit by a hurricane. The director is Tony Taccone, who also guided Carrie Fisher through Wishful Drinking. In the case of Leguizamo, Taccone does the only thing a self-respecting director should do. He gets out of the way and lets the star get on with the business of tearing the house down.

The idea is deceptively simple: When his son comes home from school bullied by his classmates who call Puerto Ricans “freeloaders on welfare”and complaining because there are no Hispanic role models in his textbooks, Leguizamo decides to set things straight by looking up everybody from the ancient Aztecs to Desi Arnaz on I Love Lucy. His aim is to undo everything we’ve ingrained in our moronic little heads about Latinos. The information is spread around like manure with hiccups. There’s a blackboard, some chalk and enough motormouth moxie to spare. What did the Greeks contribute to the world besides feta cheese? He’ll tell you. It’s mostly funny, but he also tells you about the genocide of 73 million Native Americans by the Spanish conquistidores who replaced them with blacks, destroyed their native arts, and presented such precious Latino gifts to the world as sombreros, chili peppers, the tango and Xavier Cugat. Where would we be today without guacamole? The Spanish were replaced by the survivors of the Mayflower, who killed off the rest of the Indians and brought the settlers….syphilis? Searching for heritage heroes, Mr. Leguizamo goes through Montezuma, Cortex, and a Cuban cross-dresser who passed himself off as a Confederate officer in the Civil War. Somehow he manages to work in the Aztecs, the Incas, and Sigmund Freud, resulting in monologues that often sound like jabberwocky.

Most of the rant is frantic and funny. It is also filthy, which seems to please New York audiences no end. I got used to more fucks than you would hear on a single night in the Brooklyn Navy Yard, but when Leguizamo drew diagrams of the number of holes in the human anatomy where the penis can go, I tuned out. Another caveat: He explodes with ideas, but they don’t always come together coherently and some of them rattle around in languages he doesn’t bother to translate. The audience doesn’t always get the punchlines, but they laugh anyway. That being said, I admit I found a lot of it clever and hilarious. Who can fail to fall apart when, in excoriating the Italians, Leguizamo tells his son “Columbus was the Donald Trump of the New World”? And not all Latinos get off with a merit badge. Discussing his mother’s terrible cooking, he confesses the worst holiday in Latino history is Thanksgiving: “For years, my Mom has been serving so many leftovers that no one has ever been able to remember the original meal.” As dotty as his anecdotes, ad libs, history lessons and other examples of higher learning are, it’s even more hysterical to watch him tell them. He swaggers, swoops, swears, minces, lisps, prances, dances, marches and shadow boxes. And you learn things: In World War Two, one Mexican captured thousands of Japanese enemies single-handed, and in the American Revolution the Latinos provided muskets for George Washington. True or false? When it ends, you don’t know a thing about Latin History 101, but you do feel a little more like a moron. 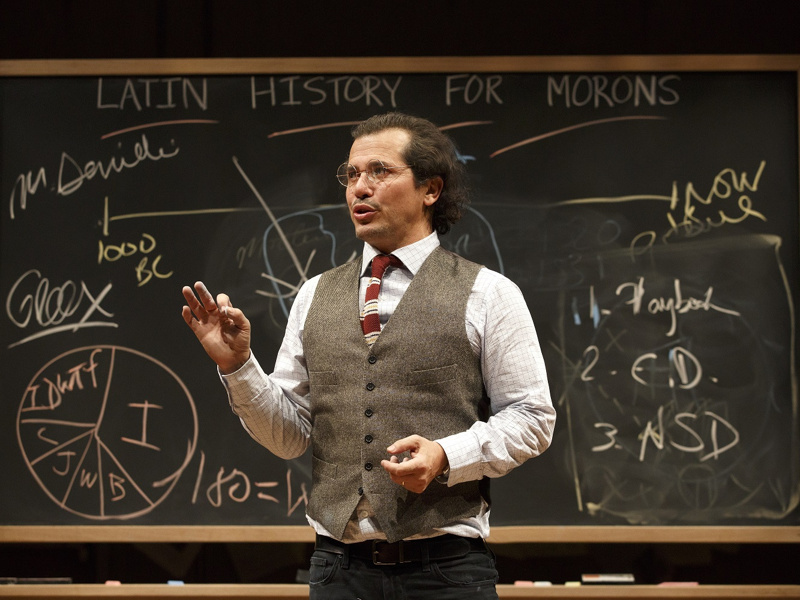