Carrie Fisher is set to reprise her role as General Leia in December’s Star Wars: The Last Jedi following her untimely passing late last year, but she’ll also be popping up in two more episodes of Fox’s Family Guy.

Fisher has long voiced the character of Angela, Peter Griffin’s boss with a propensity for sexual harassment. On tonight’s episode, she’ll fire him three separate times.

“She comes in dressed in this odd get-up that we’ve never seen her wear before, and says, ‘You’re relieved of your position,’” executive producer Steve Callaghan told Entertainment Weekly. “It’s like, who fires someone that way? Beyond just the words themselves, her delivery of it was perfect, just the right balance of realistic, but stilted and oddly distant.”

But, in typical Angela fashion, she can’t help but add a little something extra to the canning.

“My favorite version of her firing Peter is the Michael Bay [segment], which culminates with Angela and Peter engaging in the grossest, longest French kiss you’ve ever seen,” Callaghan told the outlet.

“So, having to direct her to make those noises was hilarious. We were all just cracking up, because I remember saying to her, ‘Okay, so now Angela is kissing Peter, and it’s just wet and lots of tongue,’ and she just jumped right into these ridiculously gross but hilarious noises.”

Fisher has voiced the character in roughly two dozen episodes as she continued to branch out from Star Wars days as a voice actress, celebrated author and humorist. She’ll make her final appearance in the show on December 10. Series creator Seth MacFarlane, who has been making headlines for predicting many of the sexual scandals that have rocked Hollywood lately, plans to make a tribute to the character and Fisher in an episode that will air next fall.

Here’s a brief clip to help with the wait: 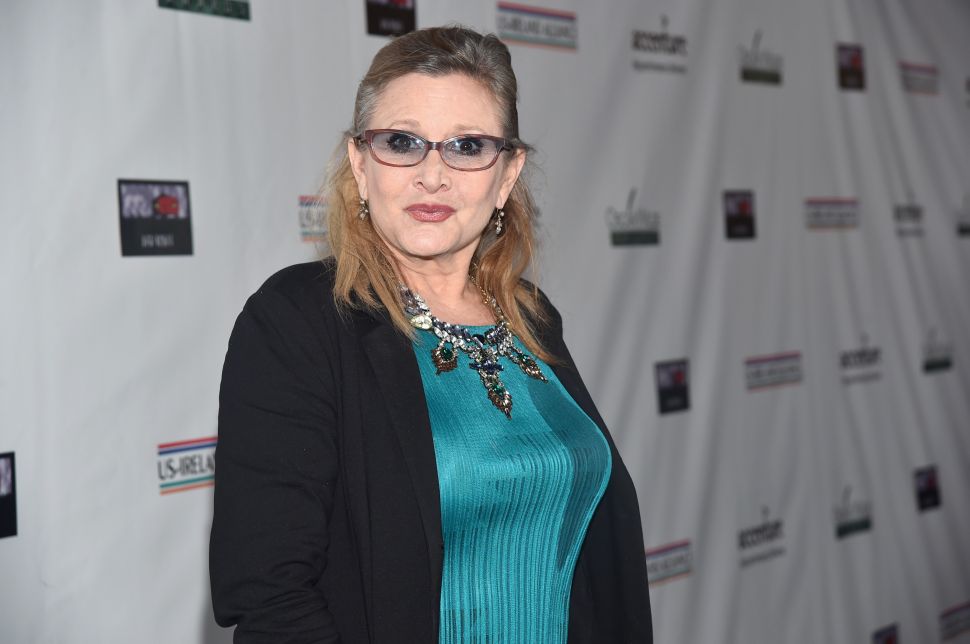