After four months of studio visits, challenges, collaborations, and fashion shows the winner of the CFDA/Vogue Fashion Fund was announced tonight. @telfarglobal, founded by Telfar Clemens in 2005, won the top prize of $400,000. Swipe up to read more. Photographed by @coreytenold. #CVFF

On Monday evening, ten promising finalists of the esteemed CFDA/Vogue Fashion Fund competition gathered at the Weylin B. Seymour event space in Williamsburg. The young designers were anxiously awaiting the announcement of who would take home the grand prize: $400,000 to jumpstart their line—and a team of the industry’s top experts, who would consult them along the way. The winner, never before crowned off the island of Manhattan, would surely represent the same diversity embraced by the fund’s new Brooklyn location.

The star-studded list of finalists included Chromat’s eclectic Becca McCharen-Tran, the menswear connoisseur Christopher Bevans and RtA’s streetwear visionary Eli Azran, all of whom seemed to possess the ability to stitch nonconformity into the very backbone of their garments.

However, it was Telfar Clemens, the Queens native who was the victor of the fashion competition, with his eponymous Telfar brand. His unisex ready-to-wear tees, tanks and polos and disruptive aesthetic, which he describes as “horizontal, democratic, and universal” were what piqued the interest of the judges, which included Diane von Furstenburg, Instagram’s Eva Chen, Vogue‘s Nicole Phelps and the CFDA’s Steven Kolb.

Here’s what you need to know about the latest CFDA champ, who will join the fashionable crowd of the award’s previous recipients, such as Brock, Brother Vellies, Gypsy Sport, and Jonathan Simkhai.

Clemens has been perfecting his sportswear technique for many years.

The designer started his line in 2005, when he was just 18 years old. Over the years, his unique take on gender-neutral fashion has captured the interest of acclaimed New York City boutiques like Opening Ceremony and Colette. Now, his refreshingly affordable sportswear pieces have caught the eye of fashion’s most influential minds, including the infamously tough, Anna Wintour.

He’s all about out-of-the-box collaborations.

Clemens employs diversity to transform the simplest of garments into works of art. The brand’s pièce de résistance? White Castle’s new uniforms. Yes, you read that correctly. A 2016 fashion week party held at the burger chain’s Times Square location led to fashion’s most unorthodox collaboration. The Telfar uniform is now worn by over 10,000 employees in over 400 White Castle restaurants nationwide. A capsule collection, created in celebration of the uniforms, can be purchased on the Telfar site and worn by anyone—not just fast food employees.

Telfar’s bottom line is all about fighting against mass incarceration.

Telfar has partnered with RFK Human Rights, The Bronx Freedom Fund, Youth Represent and the Brooklyn Community Bail Fund to take a stand against innocent New York City youth held at Rikers Island, especially those who are unable to afford bail. All of the proceeds from the aforementioned White Castle capsule collection will go to the Robert F. Kennedy Human Rights Liberty and Justice fund to pay bail for these minors.

He doesn’t use traditional runway models.

Instead, Clemens opts for what he calls “nodels.” For his Spring 2018 presentation, he rounded up a group of his friends—who also happen to be the cool epitome of New York’s downtown musical and cultural elite—including Kelela, Venus X, Joey Bada$$, Haley Wollens, Ian Isiah, Total Freedom, Ana Kras, and Trecartin. They modeled his designs in a dinner party atmosphere—over duck confit poutine and truffled chicken wings, no less.

He dressed Solange for her legendary performance at The Guggenheim last year.

Dubbed “performance art with a set list,” the iconic museum seemed a fitting venue for Solange’s concert, that served to explore the themes of her stunning 2016 album, “A Seat at the Table.” Even more fitting were Telfar’s burnt-orange and white monochromatic designs, coating Solange and her fellow dancers and musicians in a layer of artistry that blended seamlessly against the Guggenheim’s white spiraling interior, making for a powerful mix of color and sound. 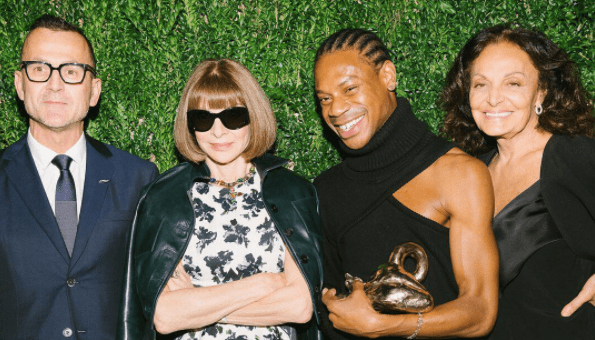