MORRIS PLAINS — Gov. Chris Christie said Monday he was “not surprised” that the trial of Sen. Bob Menendez ended last week with a hung jury, pointing to the circumstantial nature of the evidence in the case.

“I have told a number of people over the course of time that when you are doing these types of cases, especially bribery cases, it makes it much easier to prove those bribery cases if you have a narrator, someone who was involved in the transaction who is testifying, which they did not have here, or tape that allows you to show the transaction or hear the transaction going on so there is no question about what everyone’s intent is,” said Christie, who successfully brought a series of corruption cases as U.S. attorney for New Jersey from 2002 to 2008. “But cases aren’t perfect.”

Ed Norris, a member of the jury, told reporters last week that 10 of the 12 jurors leaned toward acquittal on some of the most serious counts in the Menendez case.

Norris said that the prosecution failed to present a “smoking gun” to the jury and that many felt the case could not be proved beyond a reasonable doubt. There was no wiretap or email exchange that expressly laid out the supposedly corrupt agreement between the two men and attorneys for the defense claimed that a close friendship between Menendez and Melgen was being mischaracterized.

Becuase the case ended in a mistrial, the Department of Justice has the option to retry the case, but prosecutors have not indicated what they will do.

“My view always has been, at least when I was running that office, that if you felt strongly enough to indict a case — especially against a public figure — if you had a hung jury, if you felt strongly about trying it once, you should probably feel strongly about trying it a second time,” said Christie. “But that is going to be something that the folks at Justice will make their decisions on based upon the evidence they have and how they want to proceed.”

After the mistrial was declared by Judge William H. Walls on Thursday, high-profile New Jersey Democrats including Governor-elect Phil Murphy and Senate President Steve Sweeney almost immediately issued endorsements for Menendez, who is up for re-election in 2018. Those endorsements have continued to pour in although Menendez has yet to say whether he will run.

Christie said that he was not surprised that Democrats were quick to back Menendez following the mistrial.

“I don’t think that is any surprise, right?” Christie said of the endorsements. “He is the sitting United States senator and they are providing their support and that is something that could always change if circumstances changed. Believe me, I understand that endorsements are, at times, temporary. … I am sure the senator felt very strongly about them doing that and suggested it might be a good thing and he is still the senator so I think that carries some sway.”

Christie’s remarks came after a groundbreaking ceremony for “Governor Chris Christie Drive,” an access road named after the governor in Morris County’s Central Park. Christie attended the groundbreaking with his wife, Mary Pat Christie. He acknowledged their 31-year marriage as something that he said has made him a “better person” and a “better public servant.”

Christie’s second term as governor will end in January. Before his stint as U.S. attorney, Christie served as a Morris County freeholder from 1995 to 1997. He and Mary Pat live in Mendham, a Morris County town Christie said was about 15 minutes from the road that will bear his name. 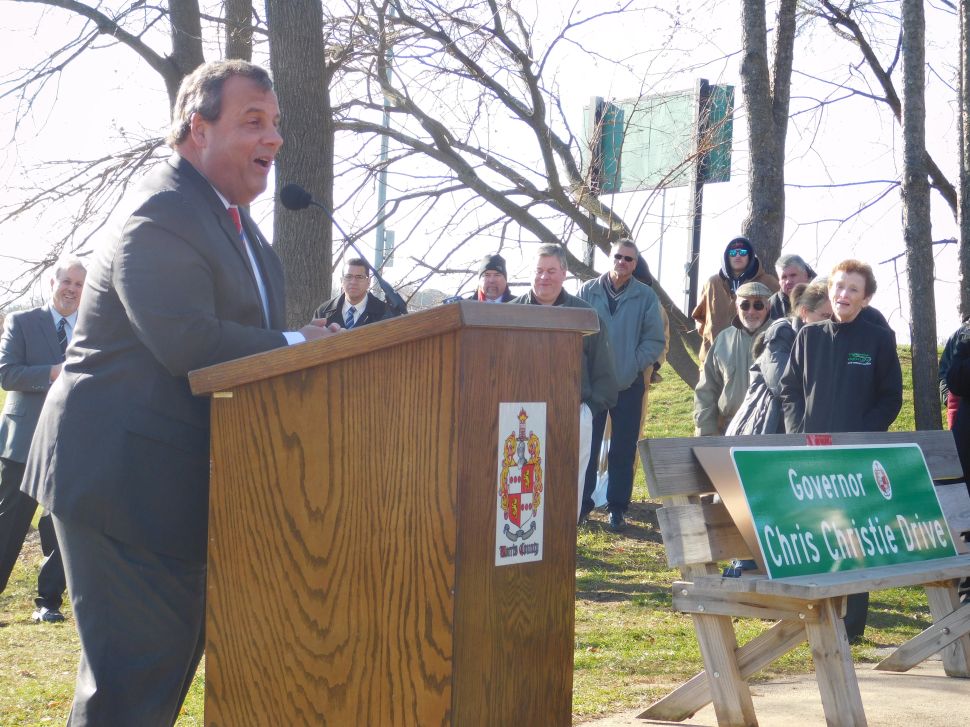