Just eight days after becoming the first Democrat to win reelection in 32 years, Mayor Bill de Blasio unveiled his new roadmap for building and preserving 300,000 affordable homes by 2026 after surpassing the initial goal he set in 2014 — his first major post-election announcement.

At the end of October, de Blasio announced that the city was on track to build or preserve 200,000 affordable homes by 2022, two years ahead of schedule — a goal he set in May 2014 as part of his “Housing New York” plan he announced at the time.

The new plan, “Housing New York 2.0,” is an updated and expanded housing plan. The new plan will create more homes for seniors by using underutilized public lots and making affordable housing accessible to seniors and people with disabilities. It also helps nonprofits buy at least 7,500 traditional rent-stabilized apartment buildings and keep them affordable for current residents to protect against displacement in fast-changing neighborhoods.

The plan also safeguards affordability at developments built through the Mitchell-Lama affordable housing subsidy program, brings about affordable homeownership to help low- and moderate-income New Yorkers by funding construction of co-ops and condos for first-time buyers and giving home repair loans. And it capitalizes on vacant lots thought to be too small or uneven for traditional housing as well as technology and innovative design to expand modular building and micro-units.

De Blasio, who is on a family vacation in Connecticut this week with his wife, First Lady Chirlane McCray, unveiled the plan in a New York Daily News op-ed titled “Building a city we can all afford” early Wednesday morning and through a press release sent out by the mayor’s office.

“This has to be a place where seniors, veterans, working families and the middle class can all afford to live,” he wrote. “Otherwise, it’s not New York anymore. We’ve spent the past four years trying to stop the loss of affordable homes, and trying to make up ground we’ve lost since the recession. Today, I’m laying out a new road map to massively accelerate that work. We are thinking big, because this crisis runs deep.”

The new plan requires an extra $150 million a year in the current four-year financial plan, which would bring the city’s investment in the new housing goal to about $1.3 billion a year over the next four years.

De Blasio said that since he launched “Housing New York” in 2014, the city has devoted funds to the creation or preservation of affordable homes for more than 78,000 households throughout the five boroughs. The city, he said, is set to obtain more affordable housing in the first four years of his administration than in any comparable period since 1978.

Under the “Housing New York” plan, the city has tripled the portion of affordable housing for households earning less than $25,000 and doubled funding for housing construction and preservation.

The new plan, de Blasio said, builds upon these developments.

Under “Housing New York,” the administration aimed to create or preserve 15,000 senior homes and apartments. Under the new plan, it will double its efforts to serve 30,000 senior households.

The city’s Department of Housing Preservation and Development and the Housing Development Corporation are starting the Neighborhood Pillars program to pay for the acquisition and renovation of rent-regulated buildings. The city will also double the capacity of the Acquisition Loan Fund, capitalizing on funding contributions from private sector banking partners and philanthropic organizations to enable non-profits and mission-based organizations to obtain rent-regulated buildings.

HomeFix, an HPD program, will assist low- and moderate-income homeowners in small, one-to-four family properties finance home repairs, and the Open Door program will fund the construction of co-ops and condos for households earning between roughly $69,000 to $112,000.

To address the issue of vacant lots, the city is launching Housing+, an initiative that will add new housing on underutilized land while tackling the renovation and financial needs of existing developments.

And in the coming years, the administration will be addressing property tax reform. The city will look at how the tax classification and assessment methodologies of privately-owned vacant land can be changed to encourage owners to make their sites productive.

And the city is currently piloting modular construction through the post-Hurricane Sandy Build-It-Back program for homeowners, constructing nearly 100 single-family modular homes and yielding cost savings of about 25 percent per home. The city will look to expand the model and release a Request for Proposal for multifamily affordable housing developments that use modular construction.

On Wednesday morning, the de Blasio administration unveiled the new plan at New Settlement Apartments in the Bronx, which were built during the administration of the late former Mayor Ed Koch. With city funds, those buildings are being restored and affordability will be maintained for all 893 apartments for an extra 60 years. 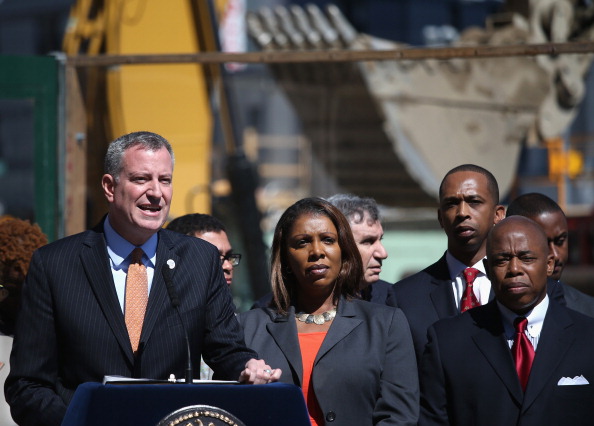