Mayor Bill de Blasio said that his upcoming trip to Iowa to help revive the Democratic Party and play a role in national party efforts is “who I am” and pledged to do his part to fight for New York City interests.

De Blasio will be speaking at Progress Iowa’s fifth annual holiday party on Dec. 19 in Des Moines, according to Politico. Progressive activists and leaders gather there every year. The organization is paying for the trip, which comes as the mayor seeks to become a national party leader on progressive issues as rumors swirl that he wants to run for president in 2020.

“I really think, once and for all, I’m trying to say to you guys, I’ve had this conversation with you for a year or two,” he told reporters on Monday afternoon. “This is who I am and this is what I’m gonna do and I’m telling you why as clearly as I possibly can. When there’s something I think that’s important, I will do my best to do it.”

He said a key focus will be taking back  the House and the Senate in 2018.

“I don’t know what that looks like,” he continued. “I just don’t. I am certain people will ask for help in different ways. I’m gonna do my best to help because I think it’s mission-critical for New York City.”

And he shot down rumors he’s weighing a presidential bid.

“I’m gonna be on the job ’til December 31 of 2021 but I’m gonna try to get a lot of good things done in the meantime that I think have a big impact on New York City,” he said.

He also rejected criticism over his decision to announce the trip after his family vacation in Connecticut amid a lead paint scandal afflicting the New York City Housing Authority.

“I was officially on vacation last week after a reelection campaign but I was working much of every day,” de Blasio added. “The trip in question is basically a 24-hour trip. I just don’t buy the notion in the 21st century that if you leave the boundaries of the five boroughs, the government ceases to work.”

In a Medium post published on Monday morning, de Blasio touted his work as an activist to fight for change and protect democracy during the administration of former President Ronald Reagan, as a Council member, as public advocate and as mayor.

He said that his efforts to protect New Yorkers’ interests include stopping President Donald Trump and the GOP’s tax plan, protecting former President Barack Obama’s Affordable Care Act and restoring federal investment in education, mass transit, affordable housing and infrastructure. He also said that he would reverse federal policies that hurt the fight against climate change.

Throughout his tenure as mayor, he noted, he traveled to Washington and Albany to fight for the city’s interests and to cities around the country to meet with fellow mayors and “build coalitions for change.” He also said that he traveled to support Democratic candidates, state Democratic parties and progressive organizations, referring to a trip to Atlanta earlier this year to fight for reform and more progressive leadership in the national Democratic Party.

“I will continue these efforts, including next month when I will travel to Des Moines to support a grassroots organization named Progress Iowa, which is fighting for change in one of the most politically important states in the nation‎  —  a state that not long ago routinely elected Democratic U.S. Senators and Representatives, and can again,” he wrote.

A cause “near and dear” to his heart, he said, is “rejuvenating” the Democratic Party.

“My view of how the party needs t‎o change is deeply based on my ideological beliefs,” de Blasio wrote. “But my view is fundamentally pragmatic: the party, as currently organized, simply can’t win often enough and in the places it should. And that has huge ramifications for New York City.”

Progress Iowa is a progressive advocacy organization that works on a variety of issues. Sen. Bernie Sanders (I-Vt.) was among past speakers.

“His progressive leadership and passion for common sense solutions provide a model for the entire country, and we look forward to hearing his thoughts on the future of our movement to ensure working families get a fair shot at success,” Matt Sinovic, executive director of Progressive Iowa, said in a statement.

The Iowa Caucus kicks off the first nominating contest and is eight days before the first primary in New Hampshire.

In November 2015, the Progressive Agenda, the nonprofit group created by de Blasio to promote his national political agenda, said that they cancelled his presidential candidates forum in Iowa because other efforts “will more effectively advance the cause of fighting income inequality.”

The decision to ax the forum — which he announced after he finally endorsed Hillary Clinton for president after initially holding off — came as de Blasio caught flak in the city for his frequent travels to other states to advance progressive causes.

A day later, de Blasio confessed that the forum was a failure, noting that they reached out to the candidates but that they did not want to participate.

He went on to win the election by a landslide, the first Democrat to win reelection in 32 years. He hailed his victory as the “beginning of an era of progressive Democratic administrations.”

He also went on MSNBC’s “Morning Joe” two days after the election, where he advised Democrats to refocus on working people of all backgrounds.

When asked if he would consider running for president in 2020 if the party approached him and told him they believed he is the best person to beat Trump, he insisted he’s focused on helping the party and his second term as mayor. 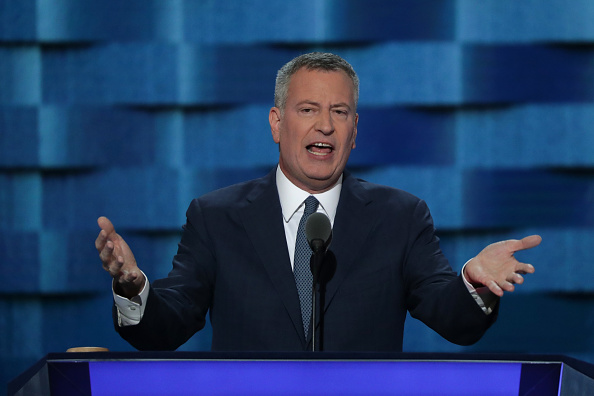