Mayor Bill de Blasio said that he wished he disclosed to the public and the 400,000 New York City Housing Authority residents that the agency failed to conduct mandatory lead paint inspections despite the fact that he was made aware of the non-compliance in April 2016.

NYCHA failed to carry out required safety inspections for lead paint over a four-year period starting in 2013, but gave false documentation to the U.S. Department of Housing and Urban Development stating that NYCHA was adhering to federal laws that require the inspections to be carried out, according to a Department of Investigation report released last week.

Despite its senior staff being informed that NYCHA was not obeying city lead laws in 2015, and NYCHA Chairwoman Shola Olatoye being notified in 2016 of non-compliance with both city and federal ruled, certifications were still given to the federal government, the report found.

The New York Daily News reported that de Blasio first learned about the non-compliance more than a year ago. The mayor told reporters he wish he had shared it sooner.

“I think that’s a fair point,” he said. “In retrospect, I wish we had. Having heard that the situation was being addressed and that tenants were being notified and that action was being taken, that’s what mattered to me. That’s what really mattered physically, materially, for people’s lives.”

He again said they should have discussed it publicly but defended Olatoye’s response.

“In retrospect, it would have been better to say, ‘Hey, we also need to go back and correct that record,'” de Blasio continued. “But actions speak louder than words. By the chair informing the residents and starting the inspections and the amelioration that obviously was the thing that mattered the most.”

In his first statement on the controversy since returning from a family vacation in Connecticut, he called the scandal “unacceptable” and said that it “should have been caught sooner.” He noted that the scandal occurred over two administrations.

And the mayor again maintained his support for Olatoye after accusing Public Advocate Letitia James and others calling for her resignation of playing politics.

He said that under her leadership, NYCHA has seen a number of improvements.

Those include a series of budget actions and investments like ending NYCHA payments to the NYPD and putting that money back into repairs and putting a huge amount of capital in NYCHA — including $1.3 billion in the June budget alone. He also said that she led the Next Generation NYCHA plan, the first-ever blueprint to address the underlying financial and physical problems at NYCHA.

“All that happened under the chair’s leadership,” he said. “So she is absolutely part of the solution at NYCHA. Look, this was a mistake and I’m very frustrated with it. But I wanna emphasize: thank God we live in a city with a tremendous focus on public health.”

In August 2012, NYCHA suspended annual general inspections of apartments when a new HUD rule loosened a requirement that public housing authorities conduct yearly inspections of every apartment, according to a NYCHA fact sheet released by the de Blasio administration on Monday morning.

But the change, the fact sheet said, did not take away NYCHA’s responsibility to inspect apartments for lead under the city’s Local Law 1. And the changes did not affect routine blood tests for children or Health Department apartment inspections that were triggered by tests with elevated lead levels at NYCHA buildings.

In June 2014, NYCHA restarted general inspections of apartments every two years after having substantially lowered repair backlogs. The general, biannual inspections did not fulfill the annual lead- based-paint requirements. Senior staff did not tell Olatoye or the general manager that the agency had previously flouted Local Law 1 or that the new inspections were not enough to comply with the law.

In April 2016, staff members told Olatoye that NYCHA was not in compliance with the law. Olatoye immediately told City Hall and started to take corrective actions, according to the fact shady.

The following month, NYCHA contacted residents about the need for new lead inspections, and Olatoye started new lead inspections of the roughly 4,200 apartments with possible lead risk and children under the age of 6, according to the de Blasio administration. The inspections were completed by early 2017 and all repairs were made.

During the period of July to August 2016, staff members told Olatoye that NYCHA was also out of compliance with HUD lead-based-paint regulations, the city said. Olatoye then told City Hall and the HUD Regional Administrator of the lead regulation lapse.

As of Monday, NYCHA has continued to cooperate with the U.S. Attorney’s Office and HUD’s probes of NYCHA conditions, including lead issues.

“Obviously, we are looking forward to a resolution of the process in the next few months,” de Blasio said. “That very well may include a federal monitor which is something we would be ready, of course, to accept.”

Edna Wells Handy, the current counsel to Police Commissioner James O’Neill, will start next month as the chief compliance officer at NYCHA to address the issues stemming from the scandal “to make sure that nothing like this ever happens again.” De Blasio said that she grew up in public housing.

When asked whether DOI Commissioner Mark Peters is right to call for an outside monitor, he said that “the pertinent authority here is the federal government.”

“The federal government has been on this for two years,” he said. “I think it’s important that agencies respect their fellow agencies.” 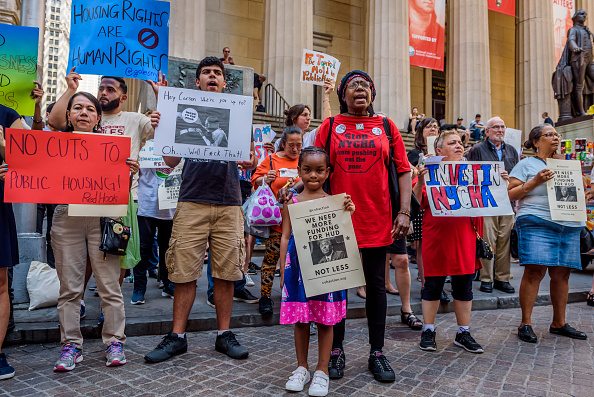