Mayor Bill de Blasio said that his landslide reelection victory on Tuesday night marks the “beginning of an era of progressive Democratic administrations,” saying that it demonstrates that New Yorkers want change and to “reclaim their democracy.”

The mayor said that he is proud of the fact that he is the first Democrat reelected as mayor of New York City in 32 years. The last one was late former Mayor Ed Koch, who served from 1978 to 1989, who de Blasio said “did so much for this city.”

“This is, as I said last night, it’s the beginning of a new era in this city and I’m very clear about that,” the mayor said. “What we saw around the country last night and we saw here is that people are waking up. They want change. They’re getting more involved. They’re going to reclaim their democracy.”

He said that there is a “clear picture” of what the vast majority of New Yorkers want as well as their values and “what they really believe in.”

De Blasio acknowledged that there is “a lot to do” but said that he feels confident that he will succeed in his second term.

“I’m optimistic because I’ve seen so much change happen,” de Blasio said. “I’m optimistic because I brought my vision to the people twice and I’ve said we need to make big, serious changes and bold changes and both times, I got a very strong mandate yesterday winning almost two-thirds of the vote, sending a clear message that New Yorkers want more change and they believe this administration can deliver it.”

He insisted that many more people would have voted if it were not for the rainstorm that started late Tuesday afternoon and continued into the evening but that a bigger issue is New York State’s “backward election laws.” He vowed to push for electoral reforms such as early voting and same-day registration in the coming months.

But even in the face of those obstacles, he argued, turnout for this year’s election exceeded the 2013 election. He said that the number of New Yorkers who voted in the election exceeds the entire population of eight states in the United States.

“That’s a reminder there’s still a hell of a lot of people who are engaging and more people engaging now for a variety of reasons but I know that will be supercharged if we fix our electoral laws,” he said.

Democrats Ralph Northam and Phil Murphy won the governor’s races in Virginia and New Jersey, respectively. De Blasio said that he will be speaking with Murphy later Wednesday or Thursday. Their victories, along with de Blasio’s, are key Democratic gains in the era of President Donald Trump and gives them some momentum ahead of the 2018 midterm elections.

The mayor said that New Yorkers delivered a “mandate for fairness”: making New York City the safest big city in the United States — a mandate he promised turn into a reality.

“It needs to be a place for everyone and it needs to be an open place, not a place that becomes exclusive,” he added. “And that’s the mandate I’m ready to act on right away and we’ll have more to say in the days to come about additional plans and visions to achieve these goals.”

He pointed to a drop in overall crime in his first term, an increase in high school graduation rates, higher test scores and his universal prekindergarten initiative but said that he wants to see a program to bring full-day, early childhood education to three-year-old children achieved in the next four years and have all students reading on grade level by the third grade.

“That is the mission I will be most focused on,” he said. “That will be the issue I put my greatest passion and energy into.”

In the area of police-community relations, he noted that all police officers will have body cameras over the next two years.

The mayor also said that he plans to work on initiatives in Albany. He vowed to fight for the mansion tax on residential property sales of at least $2 million to provide revenues for low-cost senior housing and the millionaires tax to fund subway repairs and reduced fares for low-income New Yorkers in Albany, which he called “crucial initiatives” going forward. He also said that the city’s rent laws need to be strengthened to protect affordable housing for millions of rent-stabilized and rent-controlled tenants.

“There’s a lot to do in Albany going forward,” he said. 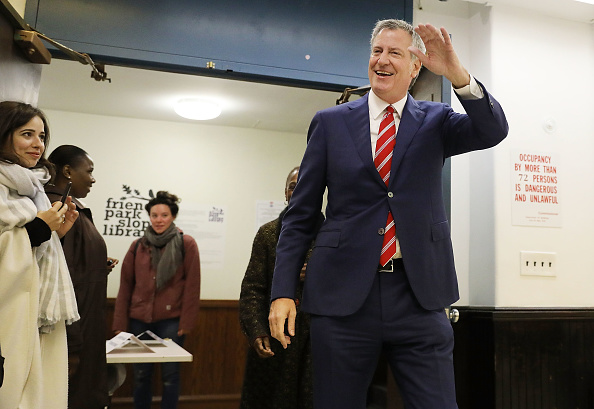