In the aftermath of a deadly terror attack committed by an immigrant who came to the United States through the diversity visa program, New York congressional lawmakers are split over whether to keep it.

President Trump said after the attack in Lower Manhattan this week that he had ordered the Department of Homeland Security to step up its “already Extreme Vetting program” and noted that the suspect, Sayfullo Saipov, a 29-year-old Uzbek immigrant who came to the United States in 2010, had entered legally through the diversity visa program.

The program grants roughly 50,000 visas a year through random selection to people from nations that have historically low rates of immigration to the United States, according to the Department of State, which administers the program. In 2016, 45,664 diversity visas were awarded, according to CNN.

U.S. Rep. Joseph Crowley (D-Bronx/Queens), chairman of the House Democratic Caucus, said that “this is still very fresh” because the tragedy occurred two days ago but said that people should not let “one rotten apple really destroy the whole tree.” He noted that many “great Americans” came through the visa.

“We all need to take a deep breath,” Crowley said. “The diversity visa has been around for over 20 years — 50,000 visas a year that are done by lottery, by chance to give opportunity to individuals who don’t have the special skills the opportunity to see the American dream.”

He said that Trump’s behavior — blaming Senate Minority Leader Chuck Schumer for sponsoring the law that created the program in the 1990s — was not “conducive” to encouraging bipartisanship or promoting “the American spirit.” (Schumer later voted to end the program in 2013.)

“I think before we even knew the names of the victims, the president was attacking the program and going after Senator Schumer,” Crowley said. “It is not a positive development.”

Congress would have to act in order to end the program. Some senators on both sides of the aisle have expressed support for scrapping it, including Sens. Dick Durbin (D-Ill.), Lindsey Graham (R-S.C.) and John Cornyn (R-Texas).

Schumer has urged Trump to rescind his cuts to anti-terrorism funding in the most recent budget he has proposed and said it was too early to comment.

“We don’t know the details of this person,” he said during a press conference on Wednesday, referring to Saipov. “The green card program has a long, serious vetting program. It takes a year. So before we can comment, we have to see what happened with this individual person.”

Lawmakers Call for End to Program

Former Rep. Michael Grimm, a felon who is challenging incumbent Rep. Dan Donovan (R-Staten Island), said that the lottery is a “foolish way to let people enter our country” and that he supports the Reforming American Immigration for a Strong Economy (RAISE) Act, which would end the “diversity visa” lottery system, among other provisions.

“We must consider our citizens’ security and well-being first and foremost, and admit applicants based on merit, security risk, and their ability to enhance the U.S. overall and improve the economy,” Grimm said in a statement.

On Wednesday, Donovan, who has backed bills that would offer legal status to Deferred Action for Childhood Arrivals recipients, said the country’s immigration system needs a “complete overhaul.”

“Our country should embrace a merit-based visa program to accept the best and brightest — ambitious and intelligent people who want to create jobs and open new, innovative companies,” he said.”Instead, we have a crazy lottery system that selects immigrants like a game of Bingo. As a matter of safety, security, and basic common sense, this has to end.”

In 2013, the Congressional Black Caucus said that it was “extremely concerned” that ending the diversity visa program would restrict the flow of immigration in the future for people “from certain parts of the world,” including Africa and the Caribbean.

On Thursday morning, Rep. Hakeem Jeffries (D-Brooklyn/Queens), who chairs the CBC’s Task Force on Immigration Reform and defended the program in 2013, tweeted a video in which he spoke out in favor of keeping the program.

During a call hosted by the New York Immigration Coalition, an immigrant advocacy group, on the program, Rep. Yvette Clarke (D-Brooklyn), a member of the CBC, said it was not a security threat because it subjects applicants to the “same stringent vetting” as other immigration visa programs.

“This is another move on the part of Donald Trump to divide and to subordinate … the dreams of others and I’m going to push back,” Clarke said.

She added that it was “despicable” of Trump to politicize the tragedy.

Rep. Gregory Meeks, another member of the CBC, blasted Trump for his comments and for putting the blame on Schumer.

“This president is divisive and for him to come out with the first tool that he had trying to blame it on diversity visas and blame it on Senator Schumer just is beyond pale,” Meeks told NY1 on Wednesday.

Mayor Bill de Blasio said that he supports “very, very careful vetting of anyone where there’s an indication of concern” but not due to their religion or country of origin. Gov. Andrew Cuomo said that the policy to which Trump was referring was a bipartisan law and “had basically no relevance to the facts of this situation.”

Anu Joshi, director of immigration policy for the New York Immigration Coalition, said that they “definitely” plan to lobby congressional lawmakers to keep the visa. She said they are spreading the message to all lawmakers.

“We focus our advocacy on all parties,” Joshi said. 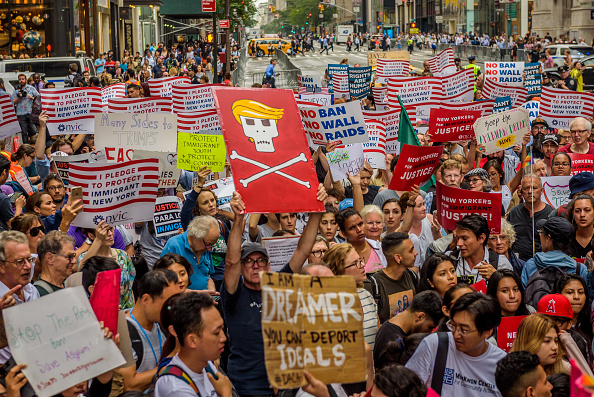