Yesterday in Seoul, the second stop in his Asia tour, Donald Trump held a joint press conference with South Korean President Moon Jae-in in an effort to thrust the North Korean nuclear crisis into the international spotlight.

“North Korea is a worldwide threat that requires worldwide action,” Trump remarked, adding that North Korean despot Kim Jong Un’s oppressive leadership and increased aggression is “threatening millions and millions of lives so needlessly” and that “it’s time to act with urgency and with great determination.”

President Moon said, “Against escalating nuclear and missile threats from North Korea, we reaffirmed our principle that we must maintain a strong stance toward North Korean threats based on overwhelming superiority of power.” He elaborated, “President Trump and I agreed to expend rotational deployment of U.S. strategic assets in and around Korean Peninsula.”

Trump’s presence inspired a movement of 15,000 protesters and counter-protesters outside Seoul’s Blue House, some waving signs and shouting chants in opposition to his previously unpolished rhetoric, such as his infamous threat to “totally destroy” North Korea. Alongside President Moon however, Trump assumed a more somber tone. Moon and Trump’s front of unification surprised some. After all, one of them has pledged to use “fire and fury” if necessary, and the other is an advocate of peace talks with North Korea who has stated his decision to “say no to the Americans if necessary” in the event of a preventative attack.

The relationship between the two men has previously encountered obstacles. In 2012, Trump called for the end of a major trade deal between the two nations. Moon has spoken critically of the Terminal High Altitude Area Defense, a U.S. missile system deployed in South Korea for which Trump has declared the South Korean government should pay, stating, “We’re going to protect them, but they should pay for that, and they understand that.” Since then tensions have cooled; Moon has come to accept the missile program’s expansion and has managed to avoid its price tag thus far.

Trump and Moon appeared confident in their alliance, pledging unification across trade issues and increased sanctions against North Korea.

“Once again,” stated President Moon, “we strongly urge North Korea to halt its nuclear and missile provocation and to come to a dialogue table for denuclearization as soon as possible. President Trump and I reaffirmed our current strategy, which is to maximize pressure and sanctions on North Korea until it gives up nuclear weapons.”

At the forefront of Trump’s address at the Blue House was the need for Chinese and Russian cooperation in the global fight against North Korea. China and Russia are the totalarian regime’s largest trading partners, and therefore, enablers.

“We call on every responsible nation, including China and Russia, to demand that the North Korean regime end its nuclear weapons and its missile programs, and live in peace,” said Trump.

On Wednesday, Trump will meet with Chinese President Xi Jinping for a three-day summit in Beijing to continue talks about North Korea. 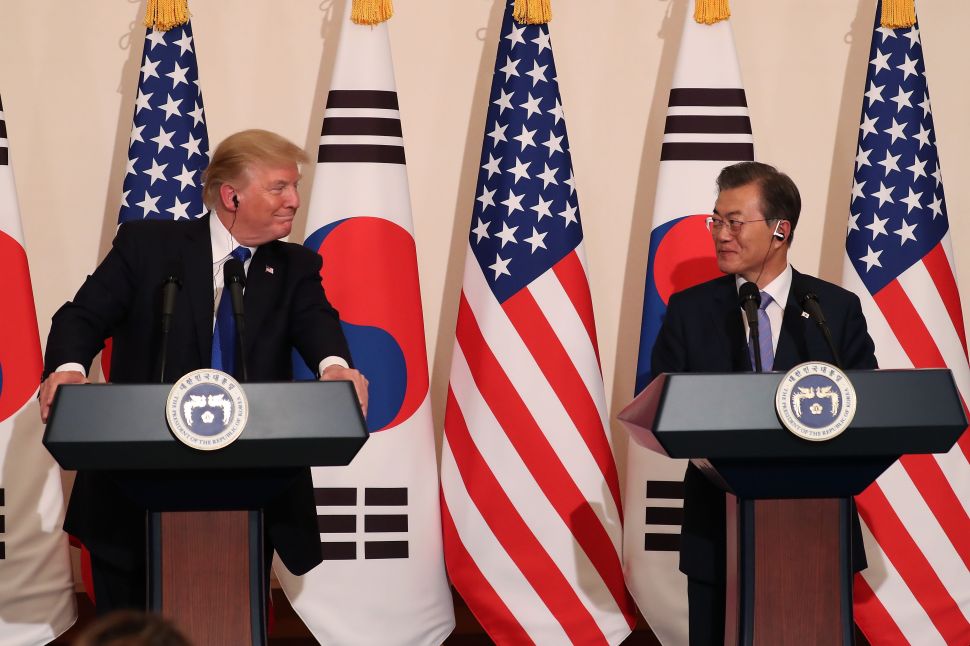