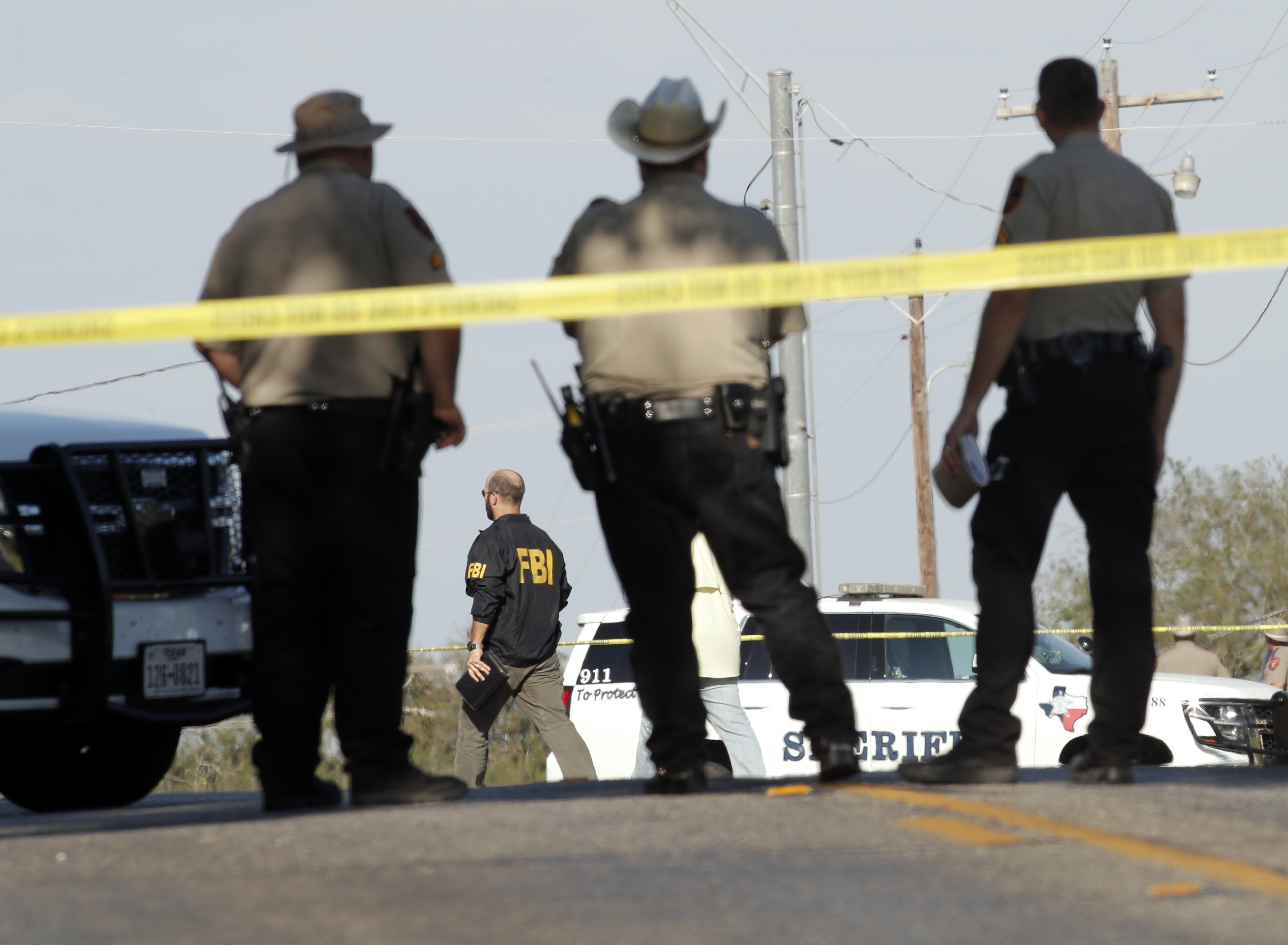 Sandy Ward spoke on her cell phone from a Texas hospital. This was live on MSNBC Sunday evening, about six hours after the latest gun massacre. She’d just learned her granddaughter was dead.

“She was always happy and cheerful,” Ward said. The girl was seven years old. Her grandson was still in surgery. “Typical five-year-old boy,” she said. “Full of spit and vinegar.” As she spoke, the screen showed a still photo of children, smiling with balloons.

Her granddaughter was among at least 26 human beings slaughtered and 20 wounded in Sunday’s blood bath in a Baptist church in Sutherland Springs, near San Antonio. Last month, 58 humans were slaughtered by a different gunman in Las Vegas.

These things happen so often now that regular viewers of cable news know the dreary routine of the post-carnage coverage.

President Donald Trump, speaking from Japan, soon offered the usual “thoughts and prayers” platitudes. “An act of evil,” he called it. “Pain and grief… Our hearts are broken… dark times… we stand strong, oh, so strong.”

The camera shots on the split screens showed Texas Rangers in brown uniforms walking around the little white building with cowboy hats on their heads and guns on their hips.

The first major call for common-sense gun safety laws was an emotional one from Democratic Senator Chris Murphy of Connecticut.

“As my colleagues go to sleep tonight,” Murphy said in a prepared statement, “they need to think about whether the political support of the gun industry is worth the blood that flows endlessly onto the floors of American churches, elementary schools, movie theaters and city streets.”

He’s been speaking out about this since 20 school kids and six adult supervisors were slaughtered in a Connecticut school five years ago.

“Ask yourself,” Murphy urged fellow senators, “how can you claim that you respect human life while choosing fealty to weapons-makers over support for measures favored by the vast majority of your constituents?”

“May God grant us all the wisdom,” Obama concluded, ���to ask what concrete steps we can take to reduce the violence and the weaponry in our midst.”

On CNN, Sheriff Joe Tackitt of Wilson County was asked on his cell phone about reports that the church video-recorded all services.

“Yes,” the lawman said. “I think it was being recorded.” Which means there might be a video of a mass murder. The sheriff said the person recording it was taken to the hospital.

On Fox, Pastor Robert Jeffress of First Baptist in Dallas said, “The Lord is close to those who are broken-hearted… When the Lord returns, evil will be defeated forever.”

By nightfall tearful people could be seen on the TV screens, holding lighted candles, weeping, hugging and praying, their damp faces in the darkness lit by flame.

In the 9 p.m. hour, Fox News Channel joined the gun debate on The Next Revolution with host Steve Hilton.

One of his guests was Jessica Tarlov. Hilton suggested to her that Obama brought up the gun safety issue “in the view of some, perhaps too quickly.”

What did she think?

“I think it was spot-on,” Tarlov said of Obama’s comment. “I don’t mind the politicization of this because I think it is a political issue.”

Tarlov recalled how Obama sang “Amazing Grace” from a church pulpit in Charlotte, N.C., when nine black worshipers were slaughtered in a church by a white Confederate flag worshipper who wanted to start a race war.

Tarlov said people must push back against the right wing and the National Rifle Association.

Hilton said gun owners were suspicious that the real agenda was to seize weapons. Then this from Pete Hegseth, a weekend host of Fox & Friends, the favorite show of Trump, who is the favorite president of the NRA.

“It’s not political leaders in Washington that are going to save us here,” Hegseth said. “It’s individuals with their Second Amendment rights who can arm themselves and defend themselves.”

He objected to Tarlov’s “very left-wing way of looking at the world, that it’s going to be a political solution.”

“The more armed citizens who arm themselves responsibly,” he said, “the safer we are.”

As the evening wore on, the banal details trickled out. Devin Patrick Kelley, the killer, was discharged by the Air Force for bad conduct in 2012 after serving 12 months in the brig. There were reports on Fox that he beat his wife and child. For his last act, he wore black clothing and a bullet-proof vest.

On the Fox screen was John Roberts, reporting from sunny Japan, where it already was noon on Monday. He showed sound clips of Trump reading his prepared text hours before.

Then came Matt Finn, a Fox reporter near the church, telling how the killer died from a gunshot wound after a neighbor with a rifle chased him in a car.

On Fox, Pastor Jeffress spoke of Satan. The anchors were suggesting that President Trump might have more to say at a news conference after midnight on the East Coast.

MSNBC’s split screen showed a still image of the little white church with flags of the United States and Texas fluttering above it in the blue-sky breeze.

Shortly after 1 a.m., at the formal news conference in Japan, a reporter asked Trump, “What policies would you support to reduce these violent actions? Is gun control the answer?”

“Mental health is your problem here,” Trump said. “This isn’t a guns situation.” 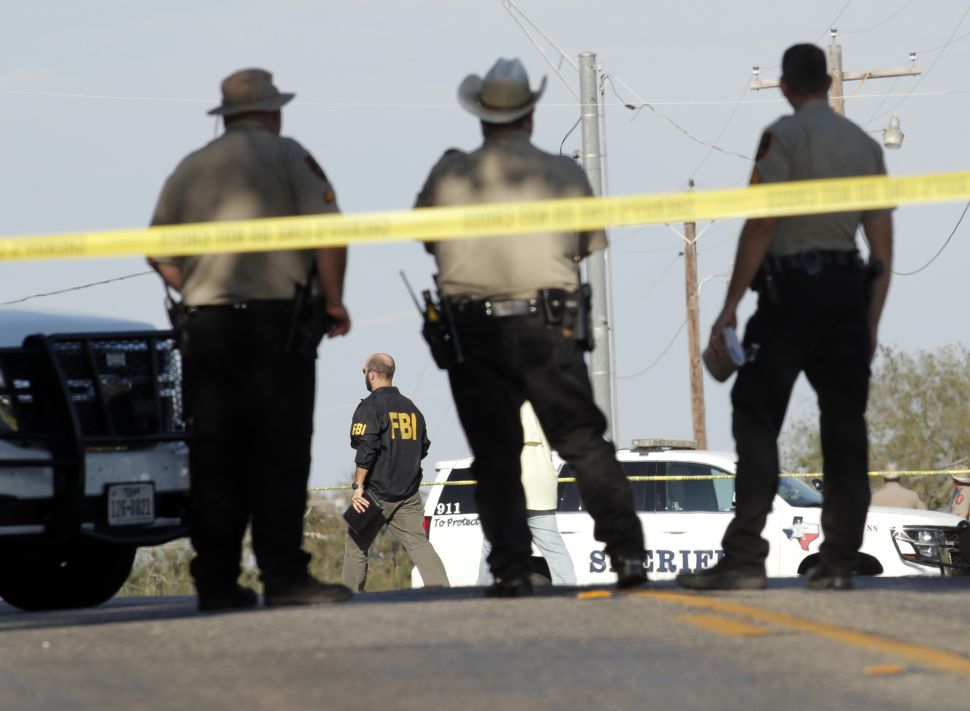