When doing business in East Asia, it’s typically understood there are business-specific formalities one must execute to show respect and get respect.

Diplomacy follows the same principle. Going out of your way to extend courtesy opens the dialogue to commerce.

President Donald Trump may have had the best intentions in trying to level the playing field with Japanese auto makers—where the trade gap is wide—but publicly stating it, in the host’s country in front of a large contingent of traveling American press, is not seen as appropriate. Trump veering off script is no doubt considered rude in buttoned up cultures.

Trump’s worn it all on his sleeve, so to speak, letting slip those adlibbed quips that gain so much attention. Like this one, on Monday, while fielding questions during a press conference with Japanese Prime Minister Shinzo Abe.

Next time, Trump hinted, you wait and see.

“He will shoot them out of the sky when he completes the purchase of lots of additional military equipment from the United States,” Trump told journalists on Monday, standing alongside Abe at the Akasaka Palace in Tokyo, news media reported. “The prime minister of Japan is going to be purchasing massive amounts of military equipment, as he should.”

Trump’s message is mafioso in nature: pay us for “safety.”

That’s debatable, according to William Hartung, director of the Arms and Security Project at the Center for International Policy, a Washington, D.C.-based think tank that works toward addressing the most urgent threats to the planet, like war, corruption, inequality and climate change.

The Japanese already have a contract for the F-35 Stealth Fighter, made by Lockheed Martin, a program fostered under the Obama administration. But the Japanese later re-worked the deal to have a factory in Japan itself, rather than in the States.

“Trump’s big pitch was, ‘Buy our missile defense systems and we’ll protect you,’” Hartung told the Observer, referencing the president’s approach. “But they probably won’t.”

Hartung, an East Asia analyst, said the likelihood of the Koreas going to war are low, experts have cautioned. And in South Korea, much of the population favors engagement and diplomacy, rather than war chants. Abe and Moon were trying to show level-headed appeasement of Trump’s pushy showmanship

By Tuesday, Trump was enjoying himself in South Korea, implying the Korean leader had promised to buy “billions” in American-made armament.

Moon was surprised, as are a nation of South Koreans who worry Trump’s firebrand political rhetoric is antagonistic.

The trip includes stops timed with regional partnership meetings, where Trump got to flex his ability to issue off-the-cuff remarks in his usual assertive style, like he was at home. The problem, though, is that he isn’t home. He’s the guest of others.

The thousands of American business men and women routinely working with their East Asian-vendor partners are girding themselves in case of blowback.

But Trump’s angle on everything is coded for North Korea’s Kim Jong Un, who is likely unfazed and watching international broadcasters as they filmed Trump speaking live within missile range.

Surely that fact wasn’t lost on Trump and his security detail.

It was precisely during that press event that Trump invited Kim to the negotiating table, something Moon has been trying to do, in an attempt to get the North Korean leader to give up his nuclear program in favor of other incentives that could greatly benefit his country and people.

But Kim is a bit like Trump—bombastic with action and unlikely to back down publicly, not wanting to lose face. That brinksmanship of avoiding embarrassment and remaining staunchly oppositional to a narcissistic fault is why Trump’s unscripted diplomacy is so dangerous.

He gave a carrot, but he did it in a backhanded way, saying in part that Pyongyang should “come to the table and make a deal,” but added a caveat by saying, “We have many things happening that we hope—in fact, I’ll go a step further—we hope to God we never have to use.”

Trump was referencing the three aircraft carriers and nuclear submarine posted in the Pacific as a deterrent to Kim’s ambitions.

The mixed messages don’t exactly foster trust from suspicions North Koreans who have their agenda of a nuclear-capable state.

Maybe Trump should leave the diplomacy to the ones he campaigned against—his well-qualified staff of career diplomats at the State Department. 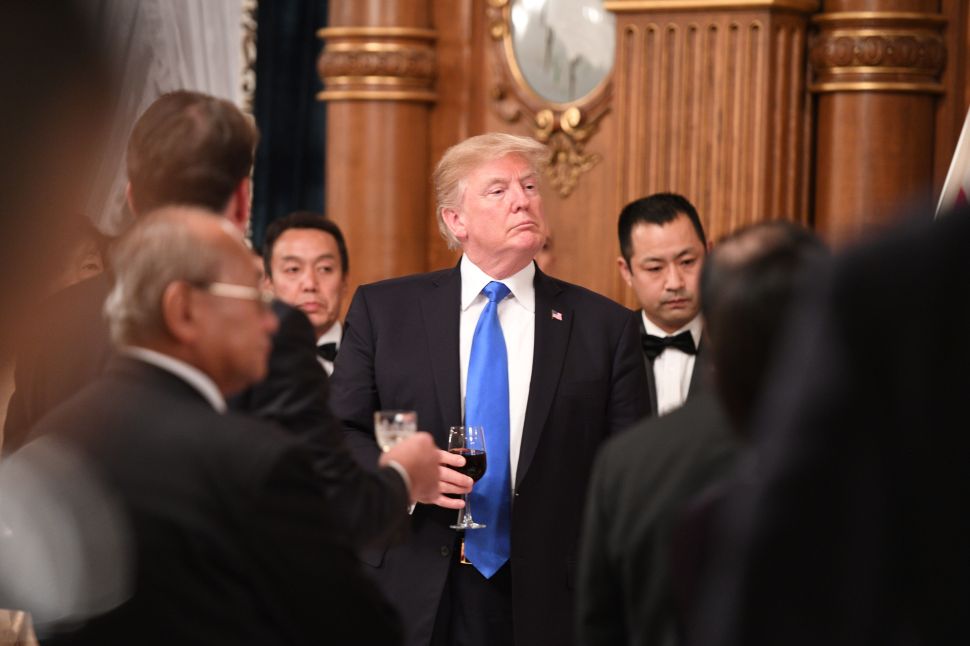