Still reeling from the 2016 election, Democrats are struggling with a changed political landscape in which a reality television star bested a former secretary of state through media manipulation. Battered by sexual assault allegations, being the minority party, and infighting, Democrats are embracing new methods to build their national profiles. From Massachusetts Senator Elizabeth Warren fundraising off President Donald Trump’s “Pocahontas” jab to former DNC Interim Chairwoman Donna Brazile’s political kamikaze, Democratic leaders are shamelessly experimenting with Trumpian-style media manipulation. But in courting coverage, personalities are exacerbating party tensions and the deeper structural hypocrisies that turned the DNC into a fledgling shell.

A fractured political system affects both parties. While conservatives have so far failed to unify to pass a major piece of legislation, Democrats have yet to effectively mobilize anti-Trump hysteria into results. Though the gubernatorial election wins in Virginia and New Jersey provided life-support, this fall has been a disaster for the DNC.

A CNN poll published earlier this month found Americans currently view the Democratic Party more negatively than at any other point in history. Additionally, Federal Election Commission filings revealed the DNC raised only a quarter of its Republican counterpart this year, ending October with its lowest fundraising total in 15 years. In a political landscape defined by 2010’s Citizens United ruling, where corporate donations pulse unabashedly through parties and super PACs, these signs point toward extinction.

Rather than unifying to stop Trump, Democratic leaders are boosting their individual brands at the expense of the party. Donna Brazile’s PR crusade against Hillary Clinton did nothing to benefit progressives, and it eroded the DNC’s credibility while the party was experiencing its worst fundraising period in over a decade. Lambasting the DNC on Tucker Carlson Tonight, calling Clinton’s control over the party a “cancer” in her new book, and using her former standing in the party to drive conversation through sound bites crippled a political institution in free fall. In turn, the beneficiaries of Donna Brazile’s torched earth tactics were herself and Republicans thrilled to have partisan ammunition against the opposing party.

While Brazile’s flagrant assault on the DNC framed her as an outsider against the establishment, Elizabeth Warren employed subtler Trumpian rhetoric this week. After the president called her “Pocahontas” during a White House event honoring Navajo veterans, the senator sent a fundraising email capitalizing off the offhand remark.

“You might have heard that Donald Trump likes to call me ‘Pocahontas.’ He does it on Twitter, at rallies, and even in official White House meetings,” Warren wrote her supporters. “Let’s show Donald Trump that we’re sick of his racist slurs by getting to work to fight his agenda. Donald Trump can keep attacking my family—but I am going to keep fighting for yours.”

Similar to how Trump’s supporters used Hillary Clinton’s “deplorables” comment for social media campaigns, doubling down on the “Pocahontas” term allows Warren to control her narrative while inciting her base. Falsely claiming Native American heritage during her years in academia has plagued the senator since 2012. Rather than kowtow, Warren embraces the nickname with gusto and accuses the president of racism, even though she falsely appropriated an entire race.

Politics was once theatre. In the Trump era, politics is reality television. As social media and the newstainment-industrial complex pump out a never-ending barrage of scandals, analyses, and sound bites, politicians need to be bigger, louder, and bolder to maintain relevancy. Republican populists turned governance into spectacle, leaving Democrats to play catch up in a world where lawmakers body slam reporters and accused child predators win primary races. Hillary Clinton and Jon Ossof proved that it’s no longer the candidate with the most money who wins — it’s the one who manipulates media the most effectively.

In their willingness to play by the new rules of modern politics, stray Democrats are abandoning their institutions and principles just when they’re needed the most. And because Donald Trump wrote the rulebook, they will always lose so long as they chase the spotlight. 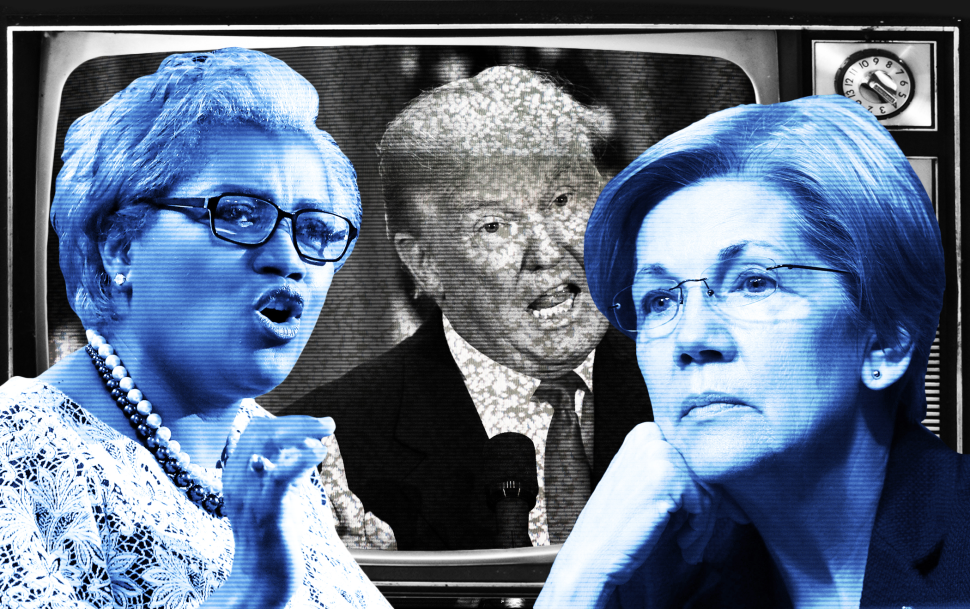