Think of the hands on the face of a clock.

But when Sean Hannity hosts Hannity on Fox at 9 p.m. on weeknights, the same hand points in the opposite direction.

Like clockwork, these two Fox veterans regularly offer views of reality that are diametrically different in terms of news, facts and truth. Both demonstrated it again this week.

Smith did it with another burst of honest reporting that sounded a lot like commentary. He dismantled and dismissed the Uranium One conspiracy story—pushed by Hannity and most Fox news shows—as a bogus charge long ago investigated and disproven.

The story claims Hillary Clinton’s foundation profited from a 2010 deal in which a Russian company bought a Canadian-based mining group with operations in the United States. Hannity has shrieked in recent weeks that Russia got 20 percent of American uranium to make nuclear weapons.

In Tuesday’s report, Smith noted that the charge assumes that Clinton approved the sale when she was secretary of State under President Barack Obama.

“She did not,” Smith said. “A committee of nine evaluated the sale, the president approved the sale, the Nuclear Regulatory Commission and others had to offer permits, and none of the uranium was exported for use by the U.S. to Russia.”

Hannity, Fox and amateur President Donald Trump are pumping up this smoke screen to distract the public and the media from multiple investigations of Russian interference in the 2016 election to help Trump defeat Clinton amid alleged collusion between the Trump gang and Russian agents.

So Trump thunders “Look at Crooked Hillary!” and Republicans demand an investigation. The right-wing media climbs aboard. And no one can fluff up Trump stuff like Hannity. Think of Trump as the ventriloquist and Hannity as the wooden dummy.

“Sean Hannity is a confidant of President Trump,” said Robert Costa of the Washington Post on Morning Joe on MSNBC on Thursday. “My sources say he talks to the president perhaps daily—at least multiple times a week. The president often watches (Hannity’s) show then confers with the host about the state of American politics.”

Perhaps this is why so much Trumpian double-talk spewed from both sides of Hannity’s mouth in the last week involving the child molestation accusations against Roy Moore, the U.S. Senate candidate representing Republicans in the special election in Alabama on Dec. 12.

On his radio show last Friday, Hannity offered sanctuary to Moore and gently interviewed him, trying to coax from Moore plausible explanations for Moore’s history of hitting on teenage girls when he was more than 30 years old.

Moore hedged and offered contradictory answers and said something about asking the mothers for permission to date their daughters. On Tuesday night, as more Republicans turned against Moore, Hannity gave the Alabama Bible thumper a 24-hour deadline to explain.

It was Hannity’s red line, his line in the sand. But, the next day, when Moore sent Hannity a long letter with his old explanations, Hannity meekly accepted it with the fuzzy logic that Alabama voters would just have to make their own decision about electing an accused child molester.

Those revelations came last fall after a recording from 2005 exposed Trump bragging about how he likes to forcefully kiss women and grab them by the crotch because they let you do it when you’re a star, as Trump was, in reality television. Might others speak up now that the “Me, Too” movement has taken hold?

Hannity has accused Smith of being anti-Trump, and he might be right. By delivering facts without right-wing slant, Smith reinforces the belief that truth has a liberal bias. It makes him stand out at the Murdoch propaganda factory.

Unlike Hannity, Tucker Carlson, Laura Ingraham and many more, Smith speaks in a calm voice and appears to respect the old Fox slogan of “we report, you decide.” Hannity, by contrast, decides for the viewer ahead of time and barks his biases in a steady harangue like a prosecutor in a kangaroo court.

In an interview with the Huffington Post about potential dissention at Fox, Smith described the difference between himself and Hannity.

“Hannity is trying to get conservatives elected,” Smith said. “And he wants you to listen to him and believe what he believes. And I’m disseminating facts… I deliver the news.”

But it sometimes seems that news about Trump bothers Smith. In an on-air chat last July about Trump’s son and aides meeting with Russians promising dirt on Clinton, Smith said: “Why all the lies? Why is it lie after lie after lie? …The deception is mind-boggling.”

Smith alluded to the cry of “fake news” hurled by Trump and Hannity against legitimate news stories they don’t like.

“And there are still people who are out there who believe we’re making it up,” Smith said.

The story also quoted Nicole Hemmer, author of Messengers from the Right.

“Were Fox to choose, it would choose Hannity over Shep,” she told the Post. “The network has clearly placed its chips on Trump.” 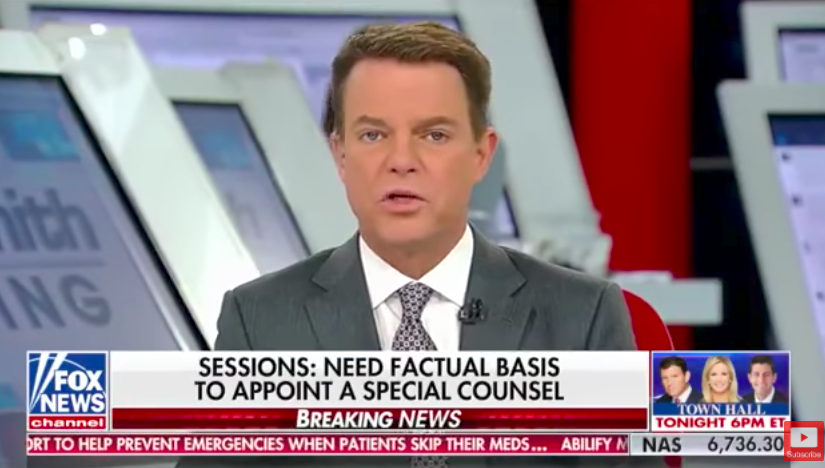