Gigi Hadid is on a roll lately. On top of being honored at Glamour Women of the Year Awards and launching her Gigi x Maybelline collection, the top model just rolled out her second shoe collaboration with Stuart Weitzman.

The Gigi Mule is available in two styles, the EyeLove and EyeLoveMore, using the evil eye as the main symbol for her inspiration. Hadid pointed in a press release that “the evil eye is a powerful symbol meant to protect those who wear it from negative energies. It’s emotionally comforting and beautiful and captivating to look at.” Along with the new collection, Stuart Weitzman has committed to donate $105,000 to Pencils of Promise as a part of their Look Good, Do Good mission to help build three schools in Guatemala, Ghana and Laos by the end of this year. Hadid mentioned her appreciation for this project during the “people I’d like to thank” portion of her Women of the Year Awards acceptance speech.

The collab’s debut was kicked off by the promotional short film entitled “A Season for Loving”, created by Cameron Duddy, the director behind Bruno Mars’ “24K Magic”. The collection also coincided with a Gigi Mule Pop-Up Shop in the Soho Stuart Weitzman boutique.  The shoes will be sold exclusively in-store and online, as well as on Moda Operandi and at Lane Crawford, starting at $498.

Mules have been the go-to shoe for fall 2017, and if they’re Hadid approved, they’re sure to fly off the shelves. The Gigi Mule was designed to be worn all year long, made of suede and lined with shearling, to keep your toes warm even in cooler weather. The colors remain neutral enough to translate from season to season with the simple EyeLove version offered in deep indigo and ballet tan, and the EyeLoveMore in frosted grey.

The Gigi Mules are the first project from Stuart Weitzman’s new creative director Giovanni Morelli and are the second project for Hadid, the first being the Gigi Boot from last fall. “I’ve really been into slides lately,” Hadid said of the more casual feeling of her second collection. But don’t underestimate the simplicity of the design. “The bright colors are fun and remind me why we designed these shoes — they represent our commitment to build three additional schools with Pencils of Promise. Look Good, Do Good,” the supermodel said.

Hadid and Stuart Weitzman’s dedication to giving back are clearly part of a larger movement in the fashion industry. Many of the 2017 CFDA/Vogue Fashion Fund finalists had activism and philanthropy as a central part of their company. As Hadid stated in her acceptance speech at the Glamour Women of the Year awards on Monday, “donate your time to charity…our success is never just about us.” 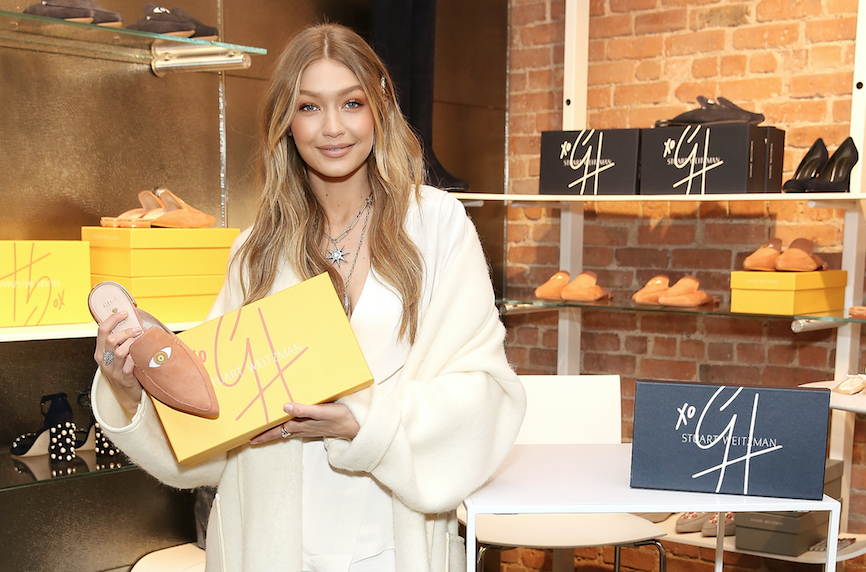