So now Jeffrey Tambor may be leaving Transparent—adding further to the woes of Amazon Studios as it may be losing one of its only successful shows—in the wake of the growing sexual scandals which we predicted previously.

Every true lawyer savant has been discussing the legal implications of such allegations of historic sexual abuse—the former District Attorneys lament the difficulties facing prosecution of such cases in the absence of concrete evidence—Exhibit 1 the Cosby Trial; The Defense Bar reminds us of the ease of making such allegations and that the difficulties of recreating movements 30 years past; Both business divorce attorneys and actual divorce attorneys are rubbing their hands with glee as longstanding Hollywood alliances and marriages are now on the rocks; and Trust and Estates practitioners are busily shielding their clients’ assets from impending claims.

I have had the good fortune of dealing with many film and television contracts, in fact it accounts for a genuine growth area in our practice, since much of Hollywood is funded by New York and movie financiers have been shying away from the staid practices of traditional Los Angeles entertainment firms. Often, we encounter long-standing uncommercial or anticompetitive vestiges and, when questioned, the wearily familiar answer is “That’s the way it has always been done.” Now I have the perfect repost of “So is Hollywood’s approach to sexual assault, but times are a changing.”

Directors, writers but mostly actors have often been treated like champion race horses, enjoying all the trappings of stardom such as free travel, food on set, private air travel on someone else’s dime, easy restaurant reservations and being lavished with jewelry and clothes. The most interesting relic though lies in the contractual concept of “Pay or Play.”

This means that once an actor, writer or director is engaged for the film and figuratively has to book out time, that person has to be paid out, even if they are released from the project. As an example, if Kevin Spacey had been contracted on a “pay or play” basis to be in an upcoming movie, even if his part is written out, he never turns up to set, and does not act in one reel of film, the project still has to pay him out the full value of the contract, which can be millions of dollars. There must be a way to stop the hemorrhaging or a method to recoup monies paid out.

It is highly likely that the current contracts with the likes of Ratner, Spacey and Tambor will demand that their payments continue, therefore there should be a contractual response. My contractual creativity was flexed in inventing the Musketeer’s clause in Screenwriter agreements, but the adaptation of the standard representations and warranties might stretch the drafting abilities of the best of us, potentially leading to standard clauses as follows:

“Artist hereby represents, warrants and agrees as follows that s/he has not, to the best of Artist’s knowledge:

A more streamlined approach may be borrowed from regular employment contracts, and on speaking to one of the doyennes of employment law, Aliza Herzberg, I was reminded that the finance industry regularly demands either integrity or morals clauses in their agreements. Often though, such clauses will only take effect if the employee is indicted or found guilty of certain crimes of fraud, embezzlement or moral turpitude.

A film, unlike a major bank, cannot afford to wait that long. If a leading actor is even accused of sexual impropriety of years gone by, the entire project is rendered commercially unviable. In order to preserve the investment that has gone into the development, and the army of people depending upon the project going forward, the movie must pivot rapidly, replace the person accused and get back the monies paid out.

As such, until the generation that began their careers in the 60’s and 70’s and preserved the sexual revolution in the modern age, have stopped working, it might be more prudent for the standard practice of “pay or play” to be retired and a stiff morals clause introduced. Alternatively, I would suggest that this might be a perfect time to address gender inequality in the movie industry, since there is the added benefit that female directors and leading ladies are more bankable than their male counterparts. 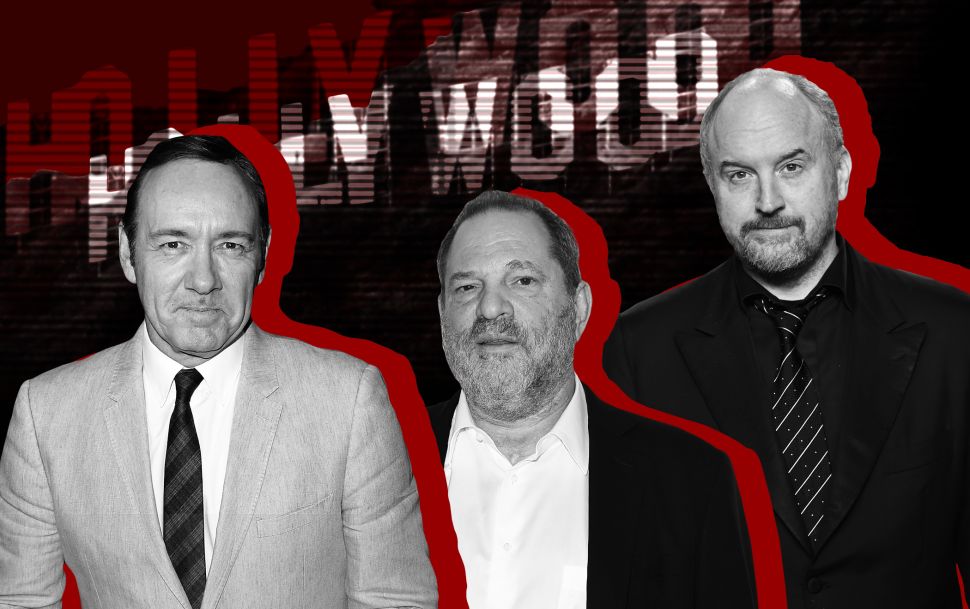