How can we make more interesting content? Stuff that spreads? Things people are excited to watch or read and share with their friends?

Casey Neistat, New Yorker, and one of the most famous people on YouTube, seems to have figured it out. Or has he?

Academia is ripe with analogous solutions to problems in other industries. For example, Google Search was the analog of: How do you find the best academic papers? Well, they’re cited more. In other words, “linked to more.” Which became the PageRank algorithm Google used to create the next evolution of web search.

But why are they cited more? What makes them so interesting and shareable and transformative in the first place?

In 1971, Murray Davis, a sociology professor at Northern Illinois University, already figured it out. He wrote a paper called “That’s Interesting” which published his discovery of why some researchers get attention and others don’t.

He found that ideas don’t become interesting simply because they’re true. Or hard to discover. Or the most rigorous of experiments.

Instead, it’s the ideas that surprise us. It’s the stuff we took for granted that we now shouldn’t be. It’s the carpet getting pulled out from under us, or rather being told we aren’t actually standing on a carpet.

Those are the things that “blow our minds.”

All of the interesting propositions I examined were easily translatable into the form: ‘What seems to be X is in reality non-x’.

We crave ideas that show us we were wrong.

Casey provides a wonderful specimen of work to judge on his YouTube channel. These are just a handful of Casey’s most popular videos. And they all tick the box of Davis’ interesting index:

Make It Count – When a company like Nike gives you money to make a commercial, you make the commercial => Nope, Casey blows the money on a trip around the world.

What would you do with $25,000? – Again, someone gives you $25k to make a commercial, you make it => Nope, Casey uses it to buy a bunch of food for people in the Philippines destroyed by a terrible typhoon.

Bike Lanes – Bike lanes are meant for our well being. They’re good things. If a cop gives someone a ticket for not riding in the bike lane, that’s also good thing => Nope. Casey shows how bike lanes can be insanely dangerous and un-traversable.

SNOWBOARDING WITH THE NYPD – You can’t snowboard through the streets of New York. It might even be illegal, especially, if the cops have announced “If you are a civilian driving out in the New York blizzard, you are subject to arrest” => Nope, Casey goes snowboarding through New York. Even has a friendly chat with the cops at the end about it.

Even Casey’s entire daily vlog experiment was a case of this. YouTube vlogs especially daily ones are often messy, shaky footage of people rambling about their day => Nope, Casey’s is cinematic and often 3 acts of a properly told story. No one can do that in a day, every single day => Nope, Casey can.

Is that all there is to it?

This week a marine ecology postdoc named Sarah Gravem found evidence that: no, it isn’t. She found that when surveying 72 other ecologists who were widely read and cited, if they could predict their transformative work beforehand. Only 4 people felt they knew how transformative their experiments could be at the proposal stage. That’s 6% who had an inkling they were onto something big.

Casey created his own video about making Viral videos. In it, he mentions making sure it’s relatable and it’s part of the zeitgeist.

But one thing that stands out from Casey’s advice, “I have no f%#$ing idea how or why a video goes viral.”

Or as Sarah writes, “Transformative research is inherently unpredictable.”

Casey’s attempt at a software business, Beme, was an intriguing idea. You record and share video without actually watching it or having a chance to edit it. Again, it’s interesting because that’s not what we expect.

It didn’t work out.

It’s sexy to figure out all the sophisticated growth hacking strategies and what tactics work best to find success, but Casey shares in a Y Combinator interview, that really the biggest factor in his success is “brute force”.

Beme the company kept spinning out more projects and more experiments, playing the odds that eventually something would work. And it did. One of those experiments eventually helped attract CNN who acquired BEME for $25 million on Nov 28, 2016.

Casey made a video that I think summarizes best what Murray Davis discovered. Do What You Can’t.

We can’t snowboard in the streets of New York. We can’t do what we want with our client’s money. We can’t. We can’t. Whether it’s expectations we or others have, or rules we assume we need to follow, we’re interested most in things that show us they were wrong.

But you can’t stop with a single video or project. To truly be interesting and get wide attention, you need to be relentless. It’s going to take more than one shot. Keep shooting. 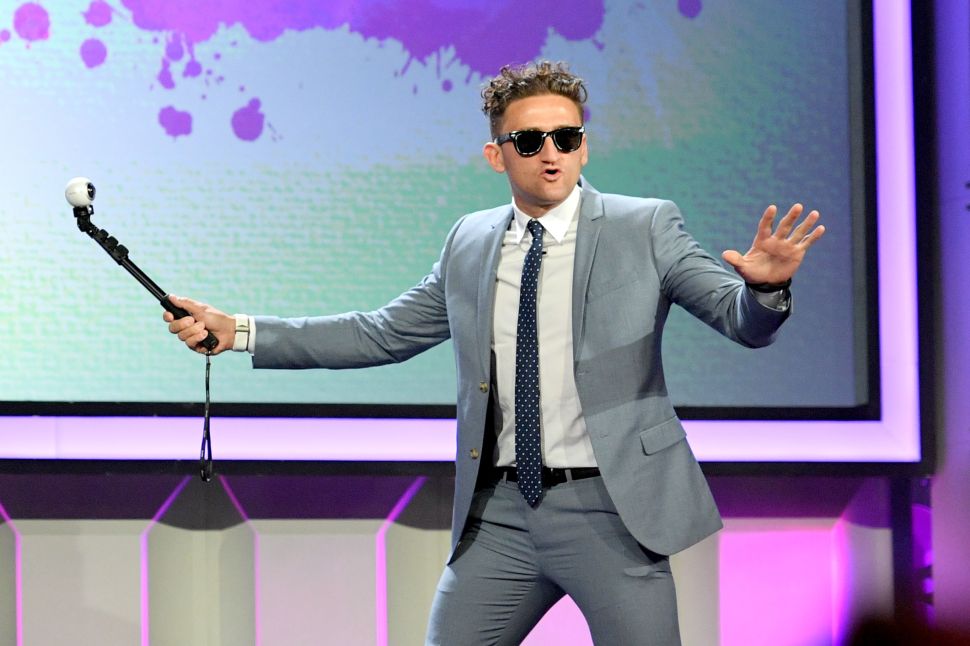