First things, first. Actress Eliza Coupe is not Jennifer Lawrence. She may be starring alongside J-Law’s Hunger Games costar, Josh Hutcherson, in Hulu’s new sci-fi action series, Future Man, but she’s not replacing Katniss, nor trying to do so. It may seem like an obvious fact, but Coupe wants Hunger Games diehards to know she’s not out to swipe Katniss’ crown.

The actress recalled to Observer the moment she learned not to awaken the Hunger Games fandom. “I made some joke on Instagram,” she related, “Josh was looking at me in a photo on Getty Images and I captioned it, ‘The moment Josh realized I’m not Jennifer Lawrence.’ Girls were like ‘God damn right, you’re not! Joshifer forever! and ‘Fuck you! You’ll never be J-Law!’ ‘You’re no Katniss Everdeen.’ And I’m like, I’m not trying to be! Can we all just settle down?”

Coupe says this all in jest, but the social media response to all things Hutcherson is intense, to be sure.

“He doesn’t post any photos of him and his girlfriend because he gets so much shit for it,” Coupe said. “People just want him and Jennifer to be together.” Meanwhile, fans of Coupe’s from her work on Happy Endings have their own response. “The five fans that give a shit are like, ‘It’s Jane and Brad forever!” Coupe has a different perspective. “I’m like ‘No! Everyone go to therapy, It’s TV. Stop.’”

The 36-year-old from New Hampshire has a gift for comedy—almost everything out of her mouth is a joke of some sort. In Future Man as the character Tiger, a time traveler sent from the future to inform Hutcherson’s character he’s the word’s savior, both her physical strength and comedic skills shine through.

“I want to be a mix between a Marvel movie and Jason Bourne,” Coupe said of her vision for the character—not one often seen on TV screens. “Where’s a female version of that, with a little bit of comedy thrown in?” When she received the script, Coupe recalled her first reaction was one of shock. Rarely does a role with that much to play with cross her path. “I was like wait a minute, this is fucking awesome. Tiger is this badass commander from the future, so she doesn’t have these weird judgments about being a woman because things are different. Wouldn’t that be nice? And I’ve been wanting to do action stuff for a long time. I work out enough, I just need to get paid for it.”

It’s true, Coupe’s body is a brick house. But she doesn’t just hop out of bed looking like Army Barbie.

“I have a plant-based diet. I don’t eat meat or any dairy,” Coupe explained. And her husband, Darin Olien, is an expert on super foods. “That helps,” the actress said. “As far as my workouts go, I do the Tracy Anderson method in Brentwood with a private trainer. I pay way too much money, but whatever.” Couple laments that she’s not a good fit for workout classes. “I get too competitive.”

Preparing for her role in Future Man, Coupe piled on the muscle—as did her co-stars. “But it’s funny, we all came in super fit and healthy. But by week two, after 17 hour days, night shoots and stunts, we were all sick and getting B12 shots on set. We were so depleted. How do you maintain being that strong? Well, I guess Hugh Jackman has figured it out.”

“I’ve done that before when I had my own show, Benched, which nobody saw, which is fine. It’s like the most the work I’ve done,” she said, peppering her facts with self-deprecation. “But hopefully, people will see this show. Or it’ll be like Happy Endings, where everyone decided to think it’s awesome like a decade after we did it. Which is cool. Everybody, just jump on board when you can.”

Executive produced by Seth Rogen and Evan Goldberg, Future Man is like The Last Starfighter meets Back to the Future meets Ready Player One mixed with The Terminator. The story follows Josh Futterman (Hutcherson), who, after becoming the first person to beat the video game Cybergeddon, is visited by Tiger and Wolf (Derek Olsen), with the news that he’s the one who is meant to save the world. With them, Josh travels through time on a quest to prevent his boss from catching herpes, which is apparently responsible for the near-extinction of humanity.

Most poignant are Coupe’s scenes with the late Glenne Headly, who plays Josh’s mother in the series. The two first worked together in the film, Making Babies, and her unexpected passing from complications due to a pulmonary embolism was understandably devastating for the entire Future Man cast.

“God, what a brilliant, talented actress,” Coupe said of her costar. “She was such a bright light. I adored that woman and am so grateful that I got to work with her. It was empowering to [watch her] speak up. Not that anyone was telling us we couldn’t, but she’d say, ‘No, this would be funnier,’ and it was cool how she thought in such a different way in regards to being a woman actor and being funny.”

Following Headly’s passing, much of the script had to be rewritten. “Pretty much throughout the rest of filming, all of us—everyone from video village to the grips and PAs—would just have a moment when her character’s name was mentioned. There were pictures of her up in the house on set and you’d see people stop and pay their respects. It sucked. It still sucks. She was amazing.”

While winding down in her free time is not one of Coupe’s strengths, living away from the hustle of Hollywood helps her relax.

“My husband and I live on 50 acres up in the mountains of Malibu, like right in the middle of nowhere,” she said. “We go for hikes and I put up way too many Instagram stories. Last night, my best friend texts me and was like, ‘woah, girl. You went deep.’ You know how the little dashes get really small? I was bored! I don’t know. But it’s videos of me running around our property with our dog. We carry a machete because there are mountain lions, bobcats, and rattlesnakes. It’s wild. And I try to document it all without getting killed.”

Yet despite the wildlife, she describes her existence as pretty run-of-the-mill. “At night, we have dinner on the porch and watch TV. Right now, we’re very into Outlander. My mother recommended it and we’re obsessed. We come home, both have a kombucha, watch Outlander and then we go to bed. We’re so fucking boring.”

Self-deprecating, super fit, hilarious and, like her character, a total badass, Coupe may be—but she’s definitely not boring. Oh, and she’s not Jennifer Lawrence, either. 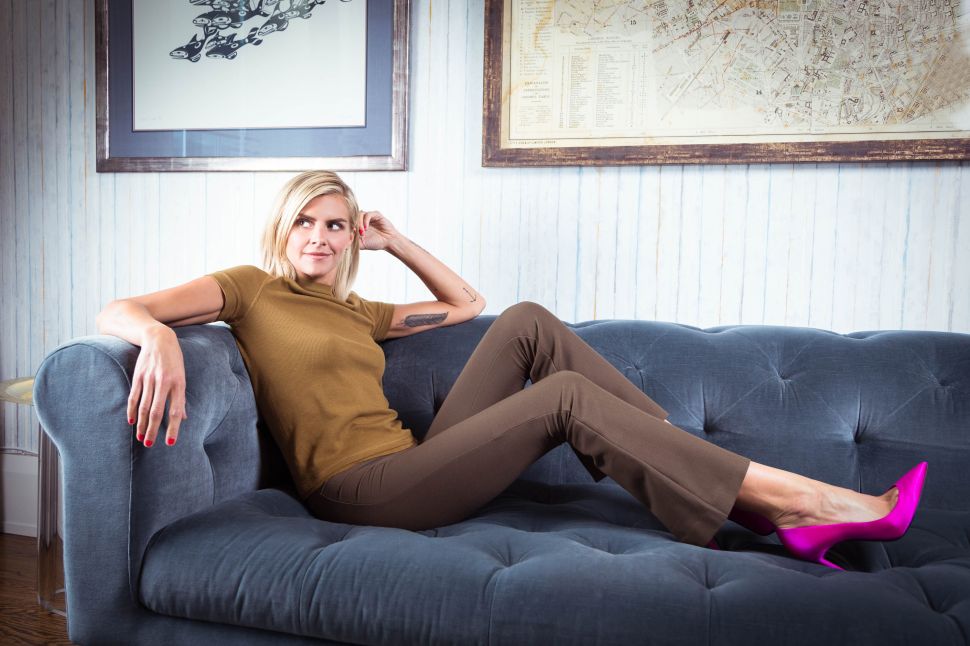