When it was announced that Sony would be heading back to the Jumanji landscape, many fans were understandably outraged. Robin Williams’ 1995 original was an instant classic that is still beloved to this day. Audiences were reluctant to give Sony the chance to ruin one of their childhood favorites. But that apprehension began to slowly thaw as it was also announced that the psuedo-sequel would feature Dawyne “The Rock” Johnson, Kevin Hart, Jack Black and Karen Gillan. That’s a slick cast that would intrigue most moviegoers.

But still, fear persisted in the minds of fans heading into the film’s December 20 release. However, the first critical reactions to the movie may win over those that are still on the fence.

Sony screened Jumanji: Welcome to the Jungle for critics on Sunday night and the response is overwhelmingly and surprisingly positive. One common theme among the reactions is the good chemistry between the cast that plays out for an entertaining watch.

Check them out below.

I can now say that the biggest surprise of the holiday season is #Jumanji. It's super entertaining & very funny w/ terrific cast chemistry (especially b/t @TheRock & @KevinHart4real). Video game fans will dig it even more. See it w/ the whole family pic.twitter.com/e6FOPwjsB5

Saw @jumanjimovie last night and it is A LOT of fun! @TheRock @karengillan @KevinHart4real and #JackBlack are chemistry gold. The body swapping stuff totally works, the action scenes are well done and it’s got a great BIG heart at the center of it. Highly recommend it. #Jumanji pic.twitter.com/OmXkc1I24o

#Jumanji was a ton of fun. Great nods to the original. Jack Black steals it. @TheRock and @KevinHart4real need to keep working together.

And YO I love @karengillan!

My only real issue with the new #Jumanji is that there's not nearly enough @missipyle. pic.twitter.com/TjYUjJKfl5

Was expecting the worst but have to admit the new #JUMANJI movie is a lot of fun. I’d even say it is one of the best “video game movies” ever made, maybe under only King of Kong, Scott Pilgrim, Edge of Tomorrow & Wreck It Ralph (none of which are adaptations).

Now that the social embargo for Jumanji: Welcome to the Jungle is up, I will say that Jack Black's performance is perfection personified and deserves 12 Oscars. pic.twitter.com/4wu3Q4wYIB

Saw #Jumanji! It's light on nostalgia (besides a handful of Easter eggs), but a lot of fun. The body swap stuff is SO good. Could watch Jack Black play a teenage girl stuck in Jack Black's body, or @TheRock newly discover his muscles, forever. #WelcomeToTheJungle pic.twitter.com/yRIoQsWASV

got to see #Jumanji and it is fun as heck! @TheRock totally steals the show, but everyone gets a chance to shine.

Hey, about that new #Jumanji: It's fun! It's the kind of family-friendly outing that should help settle a lot of debates this holiday season. Jack Black is very, very funny, and I kinda love how they attempt to make it a true sequel to the original with some wonky engineering.

Johnson, who was recently unseated as Hollywood’s top earner, has had a spotty track record with comedies in an otherwise stellar run at the box office during his career. May’s Baywatch tanked amid skewering reviews to the tune of $177 million worldwide off a $69 million budget, per Box Office Mojo. The studio is hoping that this positive word of mouth and sheer starpower will help Welcome to the Jungle avoid a similar fate. 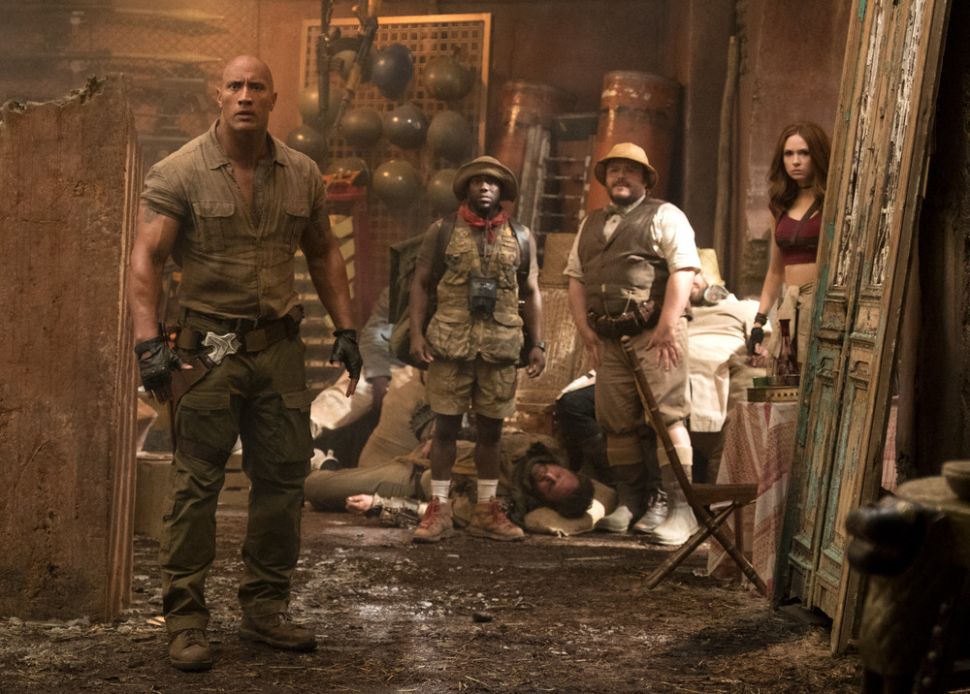