There’s a lot of bull being thrown around at the Vivian Beaumont Theatre these days—a lot of bull-and-bear, to be a bit more precise. Its roof-rattling new attraction, Ayad Akhtar’s Junk, refers to the phony junk-bond financing that short-circuited the economy during the big merger-and-acquisitions boom of the 1980s.

Heading an industrious ant-hill ensemble of 17 actors is Steven Pasquale in the role of investment billionaire Robert Merkin, labeled by Time magazine as “America’s Alchemist” for turning debts into assets. He’s named Merkin to bring to mind, if not Merlin the Magician who worked such wonders in King Arthur’s court, then Michael Milken, the “Junk Bond King” who went to jail for violating U.S. securities laws.

Flanked by equally ruthless deputies ready to take over at the drop of a subpoena—corporate raider Israel Peterman (Matthew Rauch) and attorney Raul Rivera (Matthew Saldivar)—Merkin sets his sites on the faltering family-owned Everson Steel, and is poised to pounce as soon as he’s signaled by his arbitrageur, Boris Pronsky (Joey Slotnick). All that’s saving CEO Tom Everson Jr. (Rick Holmes) from being trampled by the junk-bond barbarians at his gate is a private-equity magnate, Leo Tresler (Michael Siberry). The lines are drawn. Let the games begin.

All this may seem too rich for your blood. You could have money signs streaming out of your eyes. But don’t give up. The stratagem for this hostile corporate takeover is delivered with rat-a-tat-tat rapidity in a coded lingo that is downright audience-accessible. You find yourself thanking God for Captain Ahab and Veronica Lake.

“Veronica” is what Merkin’s marauders call Everson Steel. (It has been rumored that Tom Everson Sr. had an affair with Veronica Lake, which wrecked his marriage.)

“Ahab sees the white whale” is inside-trader speak for “the market’s going to move, and Ahab doesn’t want to lose his leg.” Ahab is Pronsky, who, like Ahab, has a limp.

Veronica Lake and Moby Dick are just the start of it. “There’s a lot of imagery in the play,” Akhtar told Observer, beaming proudly after he decoding the above line. “Actually, the very earliest draft of this play began with a scene by an ocean. Merkin woke up from a dream where he was being haunted by how much it would cost for him to buy the ocean. And the final scene in that version ended on the ocean—a suicide on a yacht.”

Akhtar has a healthy attitude towards his first drafts. “Sometimes, some of the things stay or are worth keeping and others you have to get rid of, but it felt to me like Merkin was right for that Melville-man-chasing-nature image, seeking some bounty that is beyond man’s reach. It felt right for all those guys. This yearning to conquer nature—it feels stitched close to the heart of the American dream.”

For all of its dense dollar-sign subterfuge, the drama of Junk comes over loud and clear to the audience, helped along with sharp, pointy lines of wit. To create some real and relatable characters, Akhtar added imagery and stirred vigorously.

“I think the cast did the stirring—and Doug Hughes, too,” he injected, sharing the wealth. “Doug directed it in La Jolla, and he directed it here, and he directed five readings. This company, with some exceptions, has worked on the show for three years, so they’ve built their characters over three years of time. It has been a kind of repertory company. I was trying to write a play that could get its arms around what’s happening in the world as far as money goes, and the model for me were the Shakespearean histories in terms of how to approach a big story like this.

“I felt if I could make the human actions clear—if you understand on a human level somebody’s lying to somebody else, somebody’s a double agent, somebody wants a job, somebody doesn’t like Jews—these simple actions create a human through-line that’s clear to audiences. Then, after that, there’s whatever added dimension about finance, about death, about the nature of property, about the meaning of ownership, about the place of shareholder rights in a democracy, about the transformation of value—all those questions which are played out throughout the show.”

He can even get his calamitously convoluted plot down to one of TV Guide’s single-sentence summaries. “Nobody would watch it if they read this, but my distillation for TV Guide would be ‘Plato Meets Law and Order Meets Michael Lewis.’ It’s a philosophical dialogue in a kind of audience-friendly, suspenseful narrative form, which is set in a very arcane world like Michael Lewis’ Moneyball or The Big Short.”

The shortage of heroes in Junk doesn’t bother Akhtar. He doesn’t really write heroes. “I root for Merkin, even if I’m troubled by him. It depends on the scene. I also find myself rooting for Emerson. I want him to win, then I realize, ‘Oh, he’s one, too.’”

Early in the play, Merkin says, “The press always look for the simple story—the good guy, the bad guy—that’s not how the real world works. They don’t do their homework.” It’s Akhtar’s way of “kind-of alerting the audience what they’re going to see is not a simple story. Later in the play, Merkin says it again: ‘It’s the same mindless stuff: Rich is bad. We’re obsessed with it. We can’t stop obsessing about it. Poor is good. We don’t want to be poor. God forbid we have anything to do with being poor, but it’s good.’”

“A lot of these stories are about labor-versus-management—labor is good, and management is bad—but I think the real story of the last 30 years is not really about labor-versus-management. It’s about capital-versus-different ideas of ownership within the capitalistic model, and what it means for ownership,” Akhtar said. “Why should somebody who owns stock, who lives in Vancouver, have control over the local resources of a company that is based in the community? Those questions about the meaning of ownership are really fundamental to what’s happening in the country.”

The play’s constant and frenetic action has been smartly contained in John Lee Beatty’s split-level set—two rows of five neon-bordered cubicles not unlike Hollywood Squares—although Akhtar said Beatty aimed higher than that: “What he was thinking was a cross between an Elizabethan stage and the Seagram Building.”

Junk is Akhtar’s first Broadway outing since his Pulitzer Prize-winning Disgraced—and his first play ever without a Muslim-American character. (He did manage to sneak in a little Hitchcock cameo, however: “There’s a reference to a Pakistani doctor. Tresler says, ‘I have a Pakistani doctor. It’s a prostate thing. Don’t ask.’”)

It would appear to be a whole new world for him—one that he presents with authority and conviction. Despite all this evidence to the contrary, he has never worked those trading floors of Wall Street, but some of his best friends have.

“One of them owns an investment bank, and the other is a big hedge-fund guy. I’ve been very, very close to them for a dozen years now, and everything I write about this world I run it pass them to see if it’s up to snuff. I’ve spent a lot of time in those circles, and I’ve been an observer of that financial stuff most of my adult life.”

He can even put a date on it. “My dad got me interested in markets. When I moved to New York, he made a deal that if I read The Wall Street Journal every day, he’d pay my rent for my first two years. I learned everything about the economy from that paper. I learned about GDP and LBO. I learned about interest rates and inflation and how markets move and why they move. And I’ve made my own money in the field.”

On the surface of it, this play looks like a sharp right turn in his canon, but he’s not completely convinced of that. “Is it really? Think about it:  Amir in Disgraced is an acquisitions lawyer who’s working in a mostly Jewish law firm. His bosses are probably guys who are in this play. The lead character of this play is an anti-hero who is struggling with his own religious identity, both within his community and how he is being perceived by the dominant community. So, in fact, they really are, in many ways, the same play: You have the tragic fall of a character you’re not sure how you should feel about. So there is a kind of through-line. I think people, with a little bit of reflection, can sorta get it, but, on first blush, yes, it seems very different.” 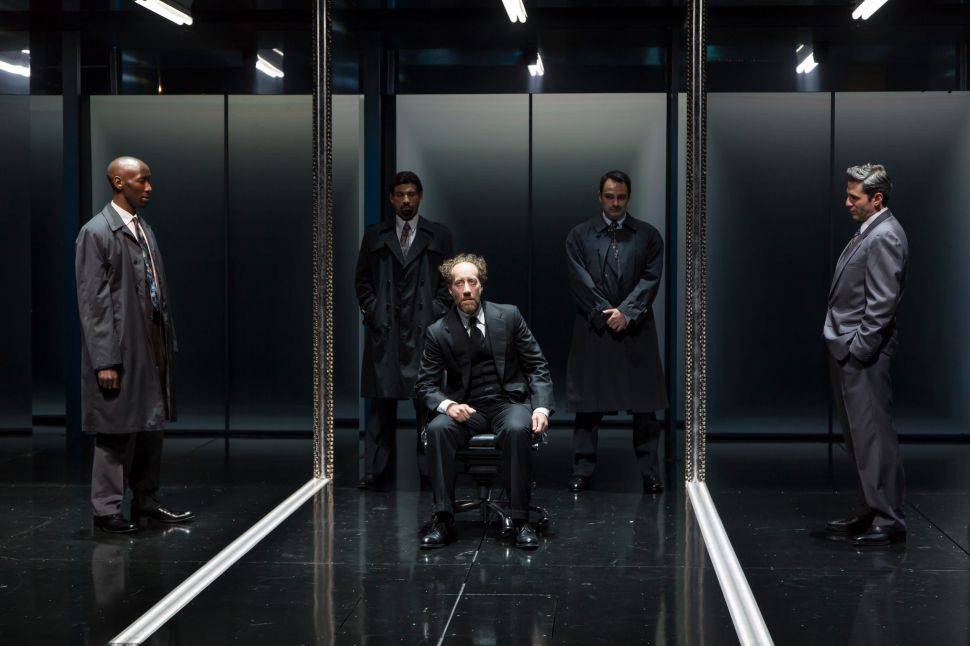