Mayor Bill de Blasio on Wednesday announced the new members of his second-term cabinet, which includes reappointments, some promotions and the departure of two high-ranking officials.

First Deputy Mayor Anthony Shorris, the second-highest ranking official at City Hall, announced he will be leaving the administration in early January, the New York Times reports. He will be replaced by Dean Fuleihan, director of the city’s Office of Management and Budget.

Alicia Glen, deputy mayor for housing and economic development, and Dr. Herminia Palacio, deputy mayor for health and human services, will stay on for a second term. Emma Wolfe, director of intergovernmental affairs, will become the mayor’s chief of staff. And Melanie Hartzog, the OMB’s deputy director for health and social services, will replace Fuleihan as the OMB director. She will be the city’s first African-American budget director.

“It is time now to start to put the pieces together for the team that will take us forward into the coming years,” de Blasio said at a press conference at City Hall on Thursday morning with the officials.

De Blasio won more than 60 percent of the vote in the general election earlier this month. He became the first Democrat to win reelection in New York City since the late former Mayor Ed Koch in 1985. He hailed his victory as the “beginning of progressive Democratic administrations.”

He said that from their point of view, it has been a “very familial dynamic.” Sixteen years later, he said, the way the team works is “very exceedingly collegial and respectful.”

“I have heard many, many people in this team say that they have never been in a more collegial, collective relationship at work and an atmosphere where people really work together, really support each other, believe in each other,” de Blasio said. “So as we get ready for another transition, for me, this is a really important reflection of what we’ve tried to do and what we want to keep building.”

He praised the members of his administration.

“I look back on the last four years with just tremendous appreciation for all the members o this team. They surpassed my expectations for them, achieved in many ways more than I could have imagined and did it with a great sense of humor… and I’m so proud,” he added.

McCray said she looks forward to working with the officials and the city, but she noted that they have a “monumental and exciting task ahead.” She also said that the recent wave of allegations of sexual harassment across the country demonstrate the necessity of female leadership. Women make up a large portion of the mayor’s second-term team.

“It is more urgent than ever to bring women into leadership position and to pave our way forward,” she said.

McCray and de Blasio praised the work of Buery and Shorris, calling them friends and saying they played a large role in the administration’s key first term achievements.

As first deputy mayor, Shorris, a government veteran, managed the day-to-day operations of city government and oversaw services across the five boroughs for nearly every city agency.

Last year, the city caught flak over its decision to lift a deed restriction on Rivington House, which paved the way for the AIDS hospice to be sold for profit to luxury condo developers.

In its report on the matter, the Department of Investigation referenced an email sent to de Blasio about Rivington House. At the time, the mayor said he did not remember it. Shorris got multiple updates on Rivington House through weekly emails from the Department of Citywide Administrative Services, according to the DOI report and an audit by Comptroller Scott Stringer. Shorris said he regularly read the emails.

De Blasio convinced Buery to leave The Children’s Aid Society to become the deputy mayor for strategy policy and initiatives and accept a significantly lower salary. In addition to working on universal pre-K and MWBE, Buery helped bring about the New York City Children’s Cabinet.

Hedge fund manager Daniel Loeb, a financial backer of Gov. Andrew Cuomo and Republicans, stoked controversy when he accused Buery, an African-American official who grew up in East New York, of not doing enough to support black children. 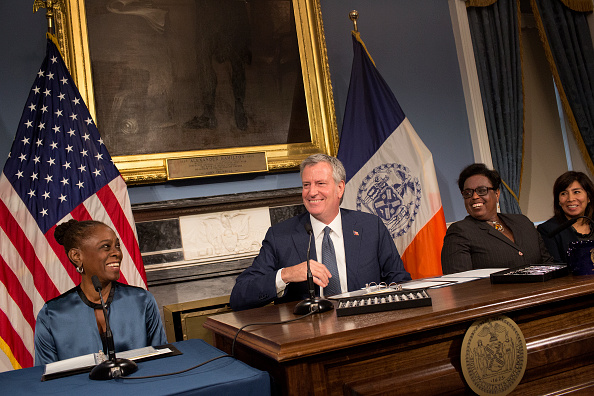