In early 1979 when I was 16 years old, I was hired to work as an office boy for a pioneering alternative rock magazine called Trouser Press. Our office was at the exact northeast corner of 42nd Street and Broadway, the geographic and spiritual center of the mossy, briny, sepia and piss-colored arcade of faded, flaking and for-sale sin that was Times Square in the late 1970s.

At the time, I did not attach any real drama to the idea of working in the so-called Crossroads of the World. However, New York City felt special, unimaginably special; it was the logical destination for any of us who, spurred on by loud and limp-wristed art rock and a gnawing sense that the suburbs would kills us, sought a place in the kingdom of outsiders. Times Square was just another piece of the Kingdom.

True, it was a particularly shabby place in a shabby city; and that’s the word that occurs to me again and again when I think of Times Square circa 1979: Shabby.

And shabby is not a bad word.

Shabby means over-lived in and under-polished. It is a word that reflects a living community, a place where people work and play and shop and drink and hang out and sit on the stoop and laugh and shout and listen to loud music. If a place is full of life but not full of money and not dominated by outside financial interests, people tend to label it “shabby.” And Times Square in 1979 felt shabby.

Let me also note that the idea of memory was different then.

See, in 1979 we went through the world without an outboard translator, without the internet telling us precisely what a location was going to be like before we got there and how we ought to interpret it after we have been there. And we did not have these wonderful devices to photograph every possible object of interest from every conceivable angle, and to freeze in amber or aspic any potential memory. You probably already know this: to a large degree, memory has become what we see on our phones, and not necessarily what we actually find in our brains.

So I look back on my experience as a 16-year-old working in Times Square with pure memory, with only my brain as a resource. What I summon is scraps of motion, swaths of color, bursts of noise and acrid smells. Without photos, memory is sourced by all my senses. It is an impressionistic picture. It is not a crossword, already two-thirds finished, assembled out of the grins and red eyes of old Facebook posts.

I never considered Times Square “sleazy”, and I still don’t. To me, sleazy is American Apparel ads, or Terry Richardson or big-titted clickbait hovering on the left side of your Facebook page. The Times Square that I knew may have been shabby, lovable but unloving, and absolutely slathered with urine and disinfectant (this smell hung over the district like fog hangs over Santa Monica in the mornings); but sleazy is not what I’d call it.

Yes, the sheer density of porn culture and commerce was extraordinary (even the most lurid panoramas don’t do it justice), but that’s not my strongest memory of the area. What I remember most is the noise: the constant babble of the drug peddlers, hookers and three-card monte dealers, the rhythmic hollers of people selling shoe shines and salvation and hot dogs, the constant click and clack and cough of the barkers trying to get you into their strip bars and massage parlors. I wish I had a tape of all that, because that noise, more than any picture, would capture the time.

Let me note that as a white male (as young and naïve as I may have been at that time) my experience in Times Square Classic is going to be profoundly different then the experience of a woman or a person of color. I understand this, so I’ll rephrase the question: As a white male in his teens, did I feel that Times Square was a dangerous or threatening place?

Absolutely not. I have no hesitation in saying that.

This was due to two factors: First, I presented myself neither as a threat nor a consumer. If you weren’t a threat or a consumer in Times Square, you were pretty much invisible. Secondly (and more practically), I kept my eyes to myself. If someone were to ask me what was my primary trick for staying safe in old school Times Square, I would tell them, “I didn’t make eye contact with anyone ever, and just as importantly, I didn’t march around as if I was deliberately not making eye contact.” I was just a person going from one place to another, I wasn’t buying, taking or selling. Via instinct, common sense, or just because I was humming a rather distracting Jam song in my head, I minded my own business.

That’s not to say that I didn’t feel vulnerable. One of my regular tasks was putting the subscription copies of Trouser Press into envelopes, and then loading all those envelopes onto a large handtruck which I would roll from our office on 42nd and Broadway to the big Times Square Post Office on 42nd  Street between 8th and 9th avenues. In other words, this stroll took me directly through the throbbing, suppurating, blinking, Peeplanding heart of Times Square. I did this errand pretty often, delicately steering the over-filled handtruck (the tower of envelopes usually rose to eye level) through the sidewalks crowded with precisely the sort of characters you would imagine on 42nd between 8th and 9th in the late 1970s. I have often wondered why someone didn’t pick me off out of curiosity, wondering what kind of stash I was carrying. But it never happened.

Before I seem too blasé, let me note that there were two places that freaked me out in a major way, pretty much on a daily basis.

I have never experienced anything like the Times Square Subway Station at that point in time. You descended into a hot hell of fierce noises, banging, angry gamelan chatter and desperation. It was a city within a city, a city unto itself. It seemed lawless. I was certain there were people living there, working there, scamming there and dying there, who never saw the light of day. Whatever was happening above ground was happening at twice the density and four times the volume beneath the streets. This was further compounded by the labyrinthine nature of the station itself, which expanded and contracted and spun out in filthy, clattering, echoing confusion. I spelunked into Times Square Station daily, and every single time I noticed a donut shop which advertised in rusty tangerine neon, “DONUTS BAKED ON PREMISES.” Each damn time I saw this sign I thought to myself, wouldn’t it be better for business if it said “DONUTS DEFINITELY NOT BAKED HERE”? Why would someone boast that their baked goods were actually made in the sigmoid colon of the world?

There was one other place that seriously spooked me: This was a vacant lot on the south-east corner of 42nd Street and 8th avenue, directly across from the Port Authority (maybe it was a parking lot, I don’t recall). If the sidewalks of the district were an open market where sellers looked for buyers (and vice versa), this lot was the waiting room for all the sellers, the departure gate for the predatory class. I still think of that small plot of land as the worst eighth of an acre I have ever known in New York City.

I will note that the primary visible product of the district did not particularly engage me. At the age of 16 I kept my nose peculiarly clean. I was a pale and over-dramatic thing and my thoughts about love and desire were very much wrapped up in the idea of the unattainable fox in the peasant blouse that should be worshipped to impractical, impossible and wholly idyllic degrees.

Nearly forty years later, I am left with frames of memory—the chalk outline of memory. I think I like it that way, because I am feeling what I remember, instead of remembering a picture. When we have a picture of an event, from that moment on the mention of that event will likely bring back the picture, not the memory.

So I can only access my memories by reaching inwards and backwards, and other random scenes emerge: I recall a cynical feeling come over me when I realized that the marquee of a lower-rent porno palace near our office merely re-scrambled the same words on their marquee each week—Horny, Lesbo, Deep, Hot, Love, Action, Slave, Teacher, Throat—to give the impression that they had new movies. And I remember staring at the amazing old McGraw Hill Building, seagreen and foamy with dirt and curved like an old chorus girl. In the days before they dressed the old, smashed theaters in Disney clothes and decked the area out in shiny Shinjuku ad glass, she hovered over the proceedings like a wise aunt, soiled yet proud. Today she is just invisible.

Nearly every city on the planet has a sordid center to its social heart, a place where desire meets commerce. This is beyond normal, and these places are the core of our entertainment and social culture stripped of its frippery and pretense. Add layer upon layer of money and marketing to an old Times Square live peep, and you have Keeping Up With the Kardashians. Really. I appreciate that Manhattan is always moving, always inconstant, but I still miss old Times Square; and I feel so fortunate that during my time as a teenage office boy at the best rock magazine in the world I got to experience it.

Tim Sommer is a musician, record producer, former Atlantic Records A&R representative, WNYU DJ, MTV News correspondent, and VH1 VJ, and has written for publications such as Trouser Press and The Village Voice. 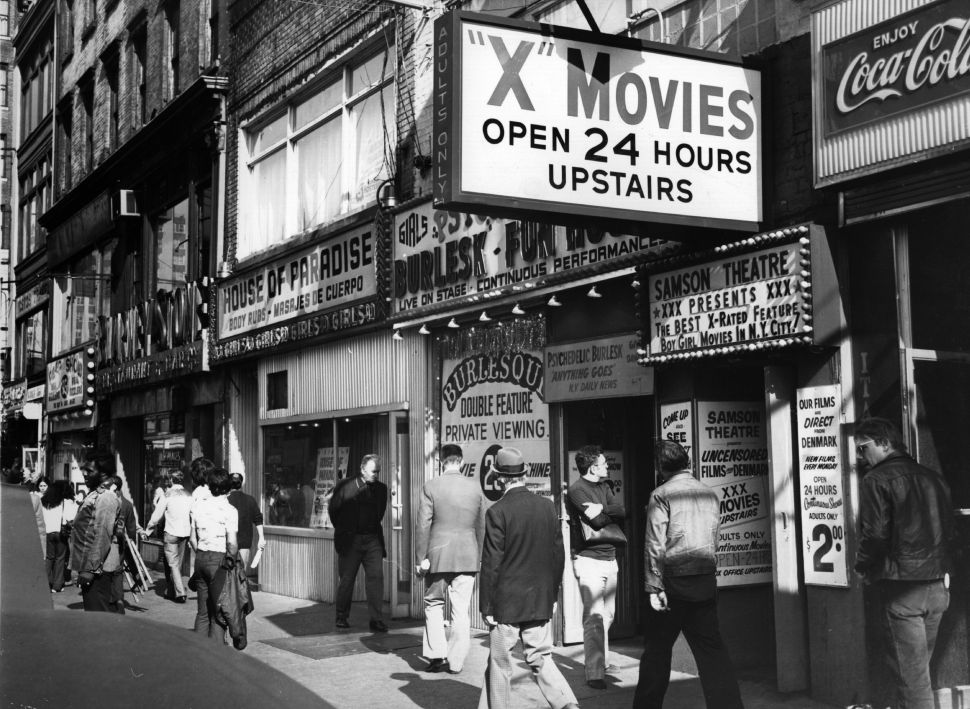