Governor-elect Phil Murphy promised to raise the minimum wage to $15 an hour on Monday during his first public appearance with legislative leaders.

Joined by Senate President Steve Sweeney and Assembly Speaker-designate Craig Coughlin, Murphy pledged to nearly double the state’s current minimum wage of $8.44 an hour to $15 an hour over several years. The timeline and the details of their plan are yet to be decided, however.

Democrats have tried before to hike the minimum wage to $15 an hour, only to have Gov. Chris Christie veto the legislation.

“If you do the math, $15 is hardly heroic,” Murphy said during his first news conference in the state house since the Nov. 7 election. “A two-income household with two dependents, at $15 an hour working full time, are barely at the poverty level.”

The state’s top Democrats didn’t have details on what a new minimum wage bill would look like, such as how the minimum wage increase would be phased in and whether there would be exemptions for certain workers. “Those conversations will be had as we go forward,” said Sweeney (D-Gloucester). “We’ll come together and we’ll figure it out.”

Murphy mentioned that, during his campaign, he discussed phasing in the $15 minimum wage over three to four years to avoid a “sticker shock” for businesses that would have to pay their employees more. Christie vetoed a bill in 2016 that would have boosted the state’s minimum wage to $10.10 per hour on Jan. 1, 2017, then increased it annually by $1.25 or more until 2021. From there, the minimum wage would have adjusted annually based on the Consumer Price Index.

“By phasing it in, we recognize that it will be fair and balanced and that it won’t shock the economy,” said Coughlin (D-Middlesex).

The minimum wage hike will face resistance from Republicans and business associations. Senate Minority Leader Tom Kean Jr. (R-Union) criticized Democrats for ignoring his offer to compromise on a modest minimum wage hike in exchange for a reduction in middle-class state income taxes. But Democrats hold majorities in both the Assembly and Senate, both of those majorities will grow after the Nov. 7 election, and they likely don’t need Republicans to pass a minimum wage increase.

“My proposal was and remains a good faith effort to put aside partisanship and reach a reasonable compromise in a manner that most legislators, and their constituents, could support,” said Kean.

“Increasing the minimum wage to $15 an hour, without addressing any comprehensive reform that will make New Jersey more affordable, will ultimately result in a heavy economic burden on small businesses that will have a ripple effect throughout the state,” Siekerka said in a statement.

In May, New Jersey Policy Perspective, a left-leaning think tank, published a report that said increasing the minimum wage to $15 an hour would boost pay for 1.2 million workers in the state, or 28 percent of the state’s workforce. Supporters say it would stimulate the economy because those workers would spend their extra earnings.

“While opponents continue to peddle in misinformation and anecdotes, the fact is we’ve seen the positive impact of minimum wage increases across the country and it’s far past time for New Jersey to raise the wage for the good of our workforce and economy,” said NJPP policy analyst Brandon McKoy.

New Jersey’s minimum wage will increase 16 cents, to $8.60, on Jan. 1, according to the state Labor Department. State voters passed a constitutional amendment in 2013 that raised the minimum wage from $7.25 an hour to $8.25 and tied future increases to the Consumer Price Index. 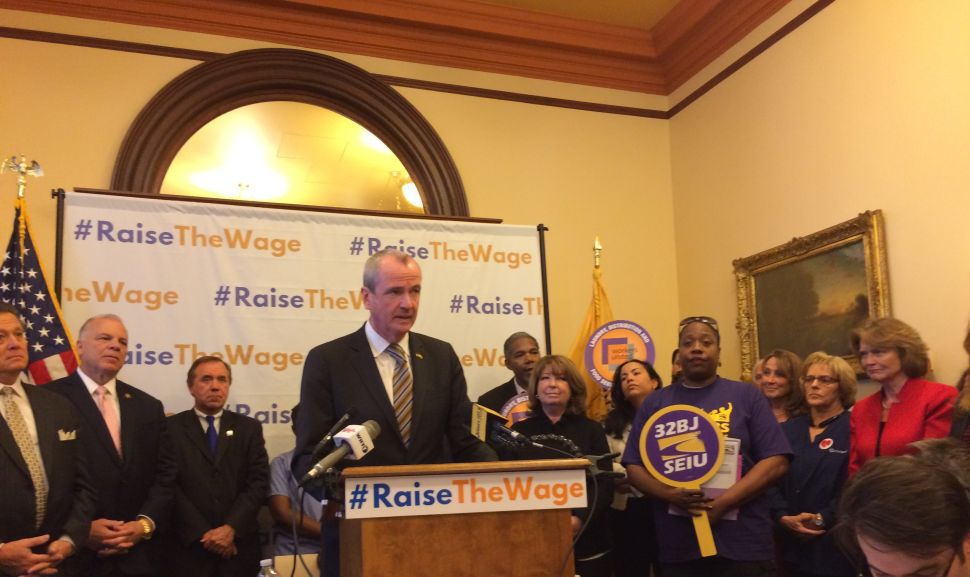