If Bob Holden, a CUNY professor and president of the Juniper Civic Association in Middle Village — a registered Democrat who ran on the Republican, Conservative and Reform lines in the general election — ends up defeating incumbent Queens Councilwoman Elizabeth Crowley after all the paper ballots are counted, then the Council will have 11 new members.

“The incoming class includes some exceptionally talented public servants,”Bronx Councilman Ritchie Torres, a speaker candidate, told Observer. “The most depressing fact about 2017 is the declining representation of women in the City Council. Even though I’m by and large enthusiastic about the individuals coming into the Council, I lament the continuing decline of female representation.”

Torres insisted that everyone agrees on issues such as investing more resources in services for the youth and the elderly, having a properly resourced school system and the government playing a role in affordable housing. Consensus on those issues, he said, will persist.

“There’s a danger in overstating the extent of the ideological shift because the range of issues that we tackle at the municipal level are much narrower than those that are tackled at the state and federal level and I find that there’s a broad based consensus on most of the subjects that come before the City Council,” he said.

Upper Manhattan Councilman Mark Levine, also a speaker candidate, told Observer that while they are all Democrats, their views range from progressive to moderate.

“I welcome the robust debate that can emerge with this wide spectrum of viewpoints among the new members,” he said.

He does not anticipate that the makeup of the new members itself will change the legislative direction of the body.

“I think that the circumstances we’re facing in the next four years — including ongoing threats from the Trump administration and the possibility of a tightening fiscal climate, will certainly impact the way we do our work and what we focus on,” he said. “And to make sure that agencies continue to deliver the best services possible in a world where there’s federal cuts, especially in the area of health and public housing is a huge challenge and one that the Council is going to have to focus on.”

A lifelong resident of the Lower East Side and the daughter of Puerto Rican parents, Rivera will be one of two Latinas on the City Council. Her platform centers on affordable housing for all incomes, support for seniors and better-funded, diverse schools and protecting small businesses and creating jobs.

Gov. Andrew Cuomo, the Bronx Democratic Party and Bronx State Senator Jeff Klein, leader of the Independent Democratic Caucus — a group of breakaway Democrats in a power-sharing agreement with Senate Republicans — endorsed him for the seat, which covers areas such as City Island, Throggs Neck, Silver Beach and Pelham Bay.

Gjonaj, a real estate broker, spent more than $700,000 on his campaign. His key issues are quality of life, affordability for tenants and homeowners and public safety. He has sued the city on the grounds that it is placing a large number of homeless shelters in the Bronx.

Bronx State Sen. Ruben Diaz, Sr., 74, a conservative Democrat who briefly served in Council in 2002, won the primary and the general election against a slate of young, progressive first-time candidates for his seat, which covers Soundview, Castle Hill, Parkchester, Clason Point and Harding Park.

Diaz, Sr., an ordained minister, is known for his support for President Donald Trump and his anti-LGBT record, though he’s also recognized for his strong constituent services and support for affordable housing and charter schools. Diaz Sr.’s issues include expanding resources for seniors and advocating for local job creation.

Community activist and former lobbyist Keith Powers, who was endorsed by term-limited Manhattan Councilman Dan Garodnick to replace him and served as an aide to elected officials, won Garodnick’s seat.

She has said that she will focus on supporting the New York City Housing Authority, preserving affordable housing, fully funding schools and bringing about stronger senior services.

Over in Bay Ridge, Justin Brannan, who worked for term-limited Brooklyn Councilman Vincent Gentile and the city’s Department of Education, triumphed in the primary and general election. He received endorsements from Public Advocate Letitia James; Gentile; Rev. Khader El-Yateem, one of his Democratic primary opponents; and the Working Families Party. He also was once a hardcore punk guitarist for Most Precious Blood and Indecision and founded Bay Ridge Democrats and a school for artists.

Queens Assemblyman Francisco Moya defeated former Queens Councilman and State Senator Hiram Monserrate, who was expelled from the Senate in 2010 after his conviction for slashing his girlfriend at the time, in the Democratic primary to replace Queens Councilwoman Julissa Ferreras-Copeland, who is not seeking reelection. In 2012, Monserrate also pleaded guilty to misusing Council discretionary funds to finance his campaign for the Senate. Moya also won the general election. He is the first Ecuadorian-American member.

Alicka Ampry-Samuel, who also ran in 2005, will fill term-limited Brooklyn Councilwoman Darlene Mealy’s seat, which covers Bedford-Stuyvesant, Ocean Hill-Brownsville, East Flatbush and Crown Heights. Ampry-Samuel is from Brownsville. She also worked at the U.S. Embassy in Ghana and as chief of staff to Brooklyn Assemblywoman Latrice Walker. Her platform centers on protecting and preserving housing stock, building a healthy community and criminal justice reform.

Kalman Yeger, who was an aide to term-limited Brooklyn Councilman David Greenfield, chairman of the influential Committee on Land Use, emerged victorious in the race to replace him.

Greenfield, who announced that he would not seek reelection, was criticized for announcing his decision after the deadline passed for candidates to petition so that they can get on the ballot, allowing Yeger, his ally, to launch a bid for the position.

Over in southeast Queens, Community Board 12 Chairwoman Adrienne Adams, a Democrat who unsuccessfully challenged Queens State Sen. James Sanders last year, is replacing disgraced former Councilman Ruben Wills, who was expelled after he was found guilty of stealing public funds. She is the first woman to represent the district.

She was endorsed by Gov. Andrew Cuomo and the Queens Democratic Committee. The seat covers Rochdale and South Ozone Park. Adams’ top three issues are housing equity over hotels, eradicating illegal dumping in the area and punishing illegally parked trucks.

Members Weigh in on New Candidates

Levine noted that there are four new women and “important historic firsts” with Moya, Gjonaj and Adams. He credited Brannan with having deep roots in Bay Ridge and strong progressive instincts and Powers as an “incredibly smart, principled thoughtful leader.”

Gjonaj, he said, fights with “every fiber of his body for his district,” noting that he would contact him regularly on parks-related issues (he heads the Committee on Parks). He said that he and Diaz Sr. have “totally different views” on social issues but he expects him to fight hard on issues like transportation policy, environmental issues and public health issues.

“I know that he will fight very, very hard on those issues and he got elected because his community sees him as a fighter and I expect that he will be influential in the Council,” he said.

Torres said that Rivera “cares deeply about public housing,” noting that the Lower East Side has one of the highest concentrations of it and that as a former legislative director she has “deep insight into the workings of the city Council.” Yeger, he said, has deep roots in the Bronx. He said that Moya is a leading advocate on immigration and workplace protection and that Powers cares about affordable housing and protecting against predatory equity.

He also noted that Brannan comes from a swing district “yet had an impressive victory” and that Ampry-Samuel is “an extraordinary public servant.”

“I think she’s the kind of elected official that Brownsville, Brooklyn has bene waiting for for a very long time,” he said. “Not only does she have a deep knowledge of policy but she has roots in Brownsville.”

Over in Maspeth, it Crowley — cousin of Rep. Joseph Crowley (D-Queens/Bronx), House Democratic Caucus chairman and head of the Queens Democratic Party — is still holding out hope she will win once the ballots are counted. Crowley sought to link Holden to President Donald Trump and Holden accused her of not doing enough to prevent the city from building homeless shelters in the district.

“I don’t think I’ve ever seen someone campaign more energetically and more intensely and with more focus than Elizabeth Crowley and to lose her as a leader in the body, it would just be devastating, all the more so because the number of women members would drop to 11,” Levine said.

Torres reiterated that both branches of government have to be “especially careful to not put marginal Democrats in politically untenable positions.”

Staten Island resident Cesar Vargas, New York’s first openly undocumented lawyer, told Observer that he feels hopeful about Moya, noting that he was one of the main sponsors of the New York State Dream Act. He anticipates that Moya will partner with Brooklyn Councilman Carlos Menchaca, chairman of the Committee on Immigration, and other groups that work on immigration issues.

“We’re gonna have many more allies who are going to be active on the issue versus just being supportive,” Vargas said. 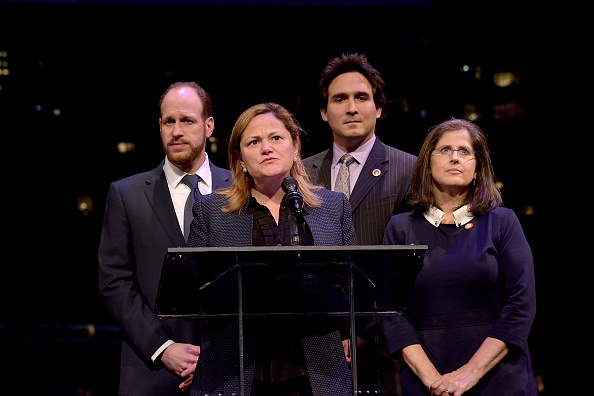