As Mayor Bill de Blasio begins his second and final term as mayor of New York City, experts say that potential candidates to succeed him in four years will have to appeal to an “ethnic constituency” and distance themselves from President Trump’s policies to be viable.

After winning roughly 66 percent of the vote in a landslide victory last week, de Blasio touted his victory as the beginning of an “era of progressive Democratic administrations.”

Evan Stavisky, a Democratic political strategist, told Observer there are certain realities to running for mayor that will continue to persist. One, he said, is having an “understanding and appreciation for ethnic politics.”

De Blasio, he said, had strong support among people of color in general but particularly African-Americans. His son, Dante, who is half-black, participated in and narrated his first TV ad.

“Ethnic politics are part of the DNA of the city,” Stavisky said. “Whether that’s right or wrong, it’s reality. And it’s not surprising because after party affiliation, the number one determinant of voting behavior nationally is ethnicity.”

That factor takes an “outsized importance” in an “overwhelmingly one party town like New York,” he said.

Christina Greer, associate professor of political science at Fordham University, said “draconian policies coming out of D.C.” will make it hard for a Republican to win.

Stavisky cautioned, however, that it may be too soon to start prognosticating. “Between now and then, we’ve got another presidential election, another gubernatorial election and countless news cycles to distract us,” he added. “I think it’s very hard if not just shy of impossible to be able to say what the dynamics are of the race four years from now.”

In December 2015, Adams, a staunch de Blasio ally, said that a 2021 bid is “good enough for me.” James, Stringer, Diaz Jr. and Jeffries have not announced any bids but are rumored candidates.

Stavisky noted that Democratic nominees have come from the citywide or borough president offices. He also noted that James, Stringer and Diaz Jr. come from vote-rich parts of the city: James, central Brooklyn; Stringer, the Upper West Side of Manhattan; and Diaz Jr., the Bronx.

The three candidates, he said, have not lost touch with their bases even as they built coalitions to elect themselves.

But whether or not they are the only candidates is uncertain, he said. He pointed out that before the 2013 election, Eliot Spitzer, who was forced to resign as governor during a prostitution scandal, ran for comptroller.

He noted Anthony Weiner’s unlikely entry into the mayor’s race in May 2013 after he was forced to resign from Congress after a sexting scandal — and his loss in the race after another scandal. Former City Comptroller John Liu’s campaign was hamstrung by the New York City Campaign Finance Board and Bill Thompson “got blown out” in 2013 election.

“There’s some overarching trends such as ethnic politics and the need to be able to raise enough money to compete citywide but ultimately the story of Bill de Blasio’s second term hasn’t been written,” Stavisky added.

He believes the list of candidates will grow but said he would not be surprised if people “change their minds and do something else.”

On the Republican side, Richard St. Paul, a Republican strategist, predicts Malliotakis and Massey will jump in again.

“There’s a potential for them to do it again,” St. Paul told Observer. “And then of course, a Republican that can self-fund themselves is always an option. But this will have to do a lot in terms of the success of the candidates.”

The city had 20 years of Republican and independent mayoral rule mayor before de Blasio came in, and high levels of crime and a struggling economy are usually the factors that propel Republicans to victory in the mayoral race.

“I think on the Republican side, given the recent election…wait and see before someone announces their intent to run for mayor in a very Democratic city,” St. Paul continued. “So I think it’s a wait and see what the environment will be like in the future.”

He said Democrats should be “cautiously optimistic.” And he expects there to be a number of candidates of color running in 2021, particularly African-American and Latino. Candidates, he said, will have to have the ability to raise money and stay competitive.

Greer said Malliotakis might be a “perennial candidate” and noted that while she did better than now-MTA Chairman Joseph Lhota, de Blasio’s GOP opponent in 2013, she “didn’t do great.”

“I didn’t really get the sense that she had the backing of a lot of Republicans in New York … that could change in the next four years if they don’t have an independent millionaire to run,” she said.

Massey, she said, will have to “really do some reflection because he just fizzled out so quickly.”

J.C. Polanco, James’ Republican opponent, said that Malliotakis ran a “great campaign” and said that he would be part of her campaign if she chose to run again. He called for a viable Republican Party with active organizations, noting that the Democrats have an “enormous advantage” in terms of voter registration, party participation and unions on their side.

“We’re really far from 2021 but I think that the environment is still very toxic,” Polanco said. “I really don’t how long it will take for us to get rid of the stench.”

He said that the second time Giuliani ran for mayor in 1993, there were more Republican elected officials and there were high levels of crime. He won another term, he said, because of the power of incumbency, because there was still a five to one margin and “smart Republicanism.”

Polanco, who does not support Trump, noted that the climate in Washington has not helped Republicans, pointing to losses in Hempstead, Nassau County and Westchester and in the city.

“We really have to connect with New York City,” he said. “We have to figure it out.”

Greer said James, Stringer, Diaz Jr. and Jeffries said Brooklyn District Attorney Eric Gonzalez could emerge as a leader given his progressive reforms and that certain City Council members should not be discounted.

“Let’s just say in the next four years, this particular speaker emerges as a foil to the mayor or continues the mayor’s legacy,” she said. “It could go either way but because of their visibility, they may see that as an opportunity to run citywide.” 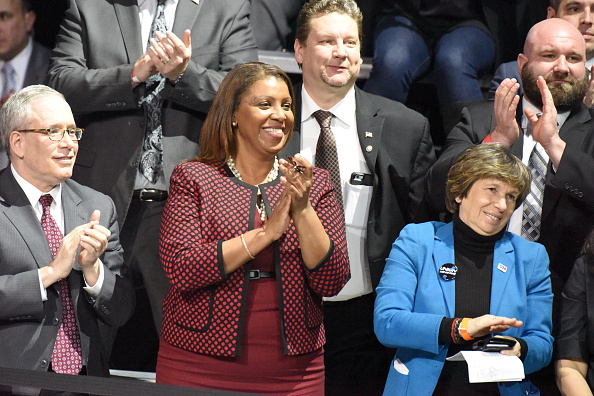