The city said that New Yorkers should expect tight security and a large police presence at the 91st annual Thanksgiving Day Parade in Manhattan on Thursday, a few weeks after a terror attack in Lower Manhattan claimed eight lives.

Last month, a truck terror attack killed eight people and injured 11 others in what Mayor Bill de Blasio, Gov. Andrew Cuomo and Police Commissioner James O’Neill called an “act of terror” — the deadliest in the city since the September 11, 2001 terror attacks. De Blasio and Cuomo marched together in the Halloween Parade in the Village as a show of solidarity and to demonstrate New York City’s resilience.

On Monday, O’Neill said that the deployment and security measures at this year’s parade “will be in addition to what we did last year.”

“You’ll see every intersection there’ll be more blocker cars and there will be sand-filled sanitation trucks,” O’Neill said on Monday. “And this is the third year in a row we’ll be using our critical response command cops who are specially assigned to counterterrorism duties. We’ll be working alongside our strategic response group officers, our patrol cops, and our emergency service unit too.”

He also took to Twitter on Tuesday to state that the city will not be held back by fear.

We’ve had a tough couple of months as a nation, but our society won’t ever accept acts of hate & cowardice as inevitable. Your #NYPD is prepared & NYers are strong & resilient. We don’t make decisions based on fear. We’re looking forward to another great #NYC tradition this year. pic.twitter.com/xHGY6pII3S

The mayor also took to Twitter on Wednesday, saying that the “eyes of the world will be on New York City” during the parade and that people should keep an eye out for road closures and take mass transit if possible.

“As always, stay vigilant — if you see something, say something,” he tweeted.

On Monday, he noted the “pain that still hangs in the air” because of the terror attack last month but said that the city’s response was “to remain strong and resilient.”

NYPD Chief of Patrol Terence Monahan said that the public viewing for the balloon inflation on Wednesday — which O’Neill said always draws more than 200,000 spectators — will take place from 1 p.m. to 8 p.m. and Central Park West from 72nd Street up to 86th Street will be shut down. No traffic will be allowed there after 12 p.m. People will have to go through a screening process in order to go to the viewing.

When the balloon inflation ends at 8 p.m., there will be rolling closures throughout the day, different traffic closures and traffic will be shut down on the entire route, according to Monahan. On the parade route itself, there will be seven locations with anemometers to check the wind speed for the balloons. A police officer will be assigned to each balloon that goes along the route.

“This has been a real combined effort, putting this together, security effort between Manhattan North operations, Manhattan South operations, and our counterterrorism forces,” Monahan said on Monday. “We are working closely with all our law enforcement partners that work in New York. Together, with a lot of various City agencies that have combined, we have sat down together with Macy’s – numerous meetings starting since last year to make sure that this is a safe, safe venue. 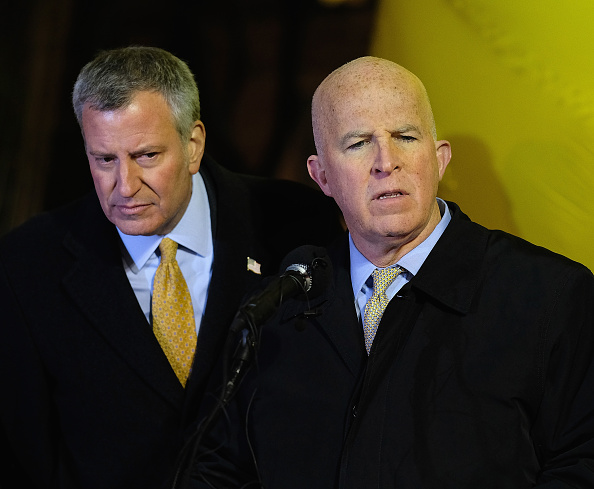