Late in Sean Hannity’s show on Fox News Channel Tuesday night, the host tried to toot his own horn with faux outrage about a picture of him to run on the cover of Sunday’s New York Times Magazine.

Teasing the segment before a commercial break, Hannity clearly thought his technical crew would post a picture of the cover on the screen while he spoke.

“Plus, my reaction to this, the New York Times profile picture of me on their cover,” he said.

When no picture appeared, Hannity said to the control room “You’re not gonna put it up?”

“Do we not have the picture?” Hannity said, by now embarrassed. “We do not photoshop the thing?”

From off camera, in the studio, came voices, one laughing, the other saying something that sounded like “Poor Sean!”

“Anything!” Hannity said. “Anyway, we’ll show it coming up later in the show.”

As he turned his eyes downward in a sheepish grimace, there appeared on screen the Times picture of Hannity in a demonstrative pose. Theme music played. Commercials began. When he got around to the segment, he showed three photos the Times used.

“They all suck,” Hannity said. “Not exactly flattering.”

Poor Sean, indeed. The only flattery is in the type, for the Times’ piece is a soft and fuzzy 8,000-word turd that avoids most of the reasons Hannity remains popular with the resentful bigots who make up a major faction of the paranoid right wing.

He must love it. The story reads as if authored by Kellyanne Conway and Tucker Carlson as told to Newt Gingrich and that brown-haired guy who isn’t Steve Doocy.

Specifically, the Times piece overlooks Hannity’s chronic dog-whistles throughout his 21 years at Fox against Muslims, Mexicans and the media—and, especially, African-Americans. Hannity was television’s strongest supporter of George Zimmerman, who killed Trayvon Martin for no good reason.

For years, Hannity repeatedly played video of Rev. Jerimiah Wright shouting “God damn America!” from the pulpit in Chicago, a ploy to tar President Barack Obama with a guilt-by-association smear.  “Black-on-black crime” in Chicago is a constant Hannity trope. At the end of Obama’s second term, Hannity offered to buy him an airplane ticket—to Kenya.

When amateur President Donald Trump was just a mere real estate hustler in Manhattan, his racist “Birther” slander against Obama always found air time on Hannity. And when Trump attacked black football players this fall for protesting police violence by genuflecting during the national anthem, Hannity quickly announced he would no longer watch NFL games.

But instead of taking a clear look at Hannity’s real work and interviewing those who oppose it, the Times made a classic journalistic tradeoff: Give us access and we’ll drop the skepticism.

As a result, the article has long passages about Hannity backstage and Hannity at Long Island restaurants and Hannity singing his tired song about his blue-collar background and how he dropped out of two colleges before becoming an expert on all things.

Is Hannity’s anti-intellectualism part of the reason for his “opinion” that climate change is a global hoax created by liberals? He constantly repeats it. But the man from the Times didn’t ask. Instead, he found space for these quotes from his unsparing interrogation of Hannity.

“I’m a journalist,” Hannity said. “But I’m an advocacy journalist, or an opinion journalist. I want to give my audiences the best shows possible.” Whew! Stop the presses!

The Times piece finds no space to recall how, during the Iraq war—after Hannity falsely promised “weapons of mass destruction” and after he advocated torture—he vowed to get himself -boarded for charity. Until he chickened out.

Even one of his recent bouts of moral cowardice got sanitized by the Times. It came this month after Hannity sternly warned Republican U.S. Senate candidate Roy Moore of Alabama to explain his defense against accusations that he, among other things, sexually molested a girl when she was 14 and he was 32.

Moore had 24 hours, Hannity warned—or else. Before time ran out, Moore sent Hannity a mealy-mouthed denial that explained nothing. But that was good enough for Hannity, who echoed his hero, “Mis-tah Trump,” by backing off his threat and saying Alabama voters would have to decide for themselves.

Although the Times piece trudges on about Hannity’s grandparents from Ireland and Hannity’s time in Catholic schools and Hannity’s paper route, the author managed to miss the most telling detail from Hannity’s Long Island past.

For when little Sean Hannity was but a fine broth of a lad, the new expansion hockey team in his area was called the “Islanders” and most of the local kids liked the local team. But not Hannity. Oh, no. Instead, he chose to cheer for a more established team, the Philadelphia Flyers.

In that era, the “Slap Shot” decade of expansion in the 1970s, the Flyers took advantage of a North American talent dearth by stocking their team with thugs and goons and winning the Stanley Cup twice by dragging their sport through the gutter. They earned the nickname “Broad Street Bullies.”

The Flyers, Hannity’s favorite team, sucker-punched victims, started brawls with more elegant teams and forced multiple rules changes to tame their mayhem. As a kid, Hannity cheered for these Broad Street Bullies and as a “journalist” he displays their same ethics.

He, too, is a bully, a cheap-shot artist and a coward who hits below the belt and after the bell. He is a bigot, a racist, and a dangerous demagogue who also is the wooden talking dummy on Trump’s knee.

Hannity constantly ridicules other news outlets—including the Times—as Fake News, just as Trump does. And Hannity is the most-watched performer in his propaganda factory.

His radio and television audience dwarfs that of the Times, a paper Hannity’s closest chum calls “The Failing New York Times.” Next time that fine paper covers this sort of First Amendment traitor, they should at least make Fox buy the ad space. 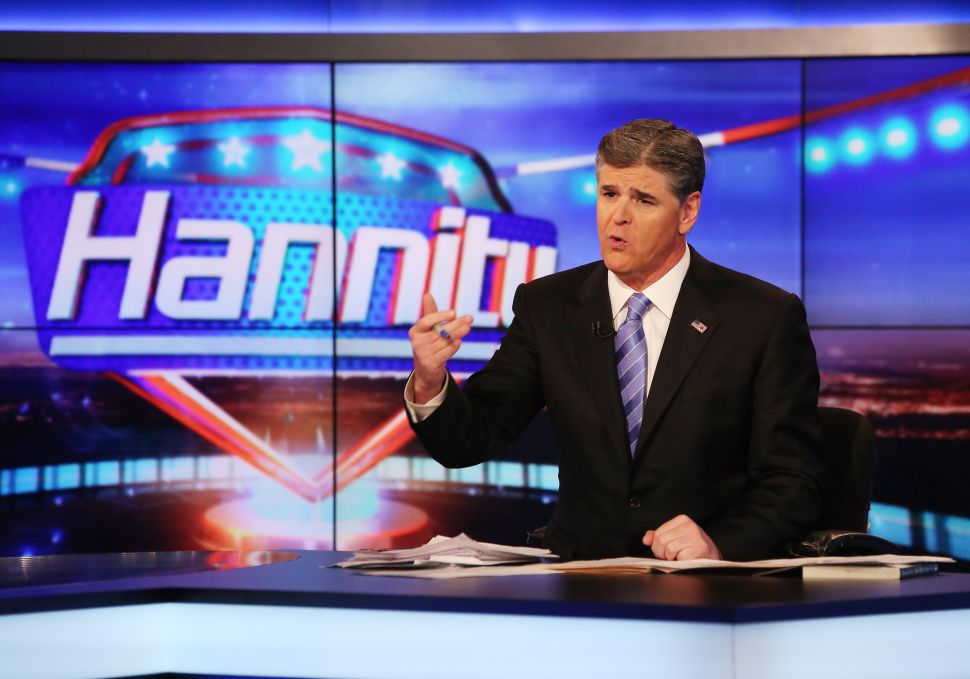