Murad Awawdeh, the New York Immigration Coalition’s director of political engagement, said that they are fighting for a community that has been underserved in many ways and is more vulnerable due to the Trump agenda, praising City Council Speaker Melissa Mark-Viverito’s work on immigration.

“We have come to rely on local community, local government to really fight for our communities and we can’t do it without having a strong New York City Council, a strong mayor, a partner within the Council who leads the Council who is the speaker,” he said.

Williams, a first-generation Brooklynite and the son of Grenadian parents, said that he is “battle-tested and collaborative.” He noted that he recently passed a legislative package that protects New Yorkers’ privacy when they give their information to city agencies and that he got arrested the day of Trump’s inauguration while protesting against the president.

“What we were talking about here today, I believe, is protect, defend and serve and I think I’m very well equipped to do that,” he said.

Rodriguez, who was born in the Dominican Republic, paid for his bachelor’s degree at City College by working as a taxi driver and was a public school teacher, and founded a school in his district. He said that he has passed nearly 50 bills in the last four years. He noted that when Mark-Viverito leaves office, there will be no other Latino or Latina in citywide office.

Van Bramer, whose family is of Irish descent, noted that he chairs the Committee on Cultural Affairs, Libraries and International Intergroup Relations. He said that he fought for libraries to be open six days a week and noted his $5.2 million Cultural Immigrant Initiative, the only funding dedicated to cultural organizations that serve immigrants. Levine said that the city would “ensure a financial blow from Washington rather than sacrifice our values.”

When asked how he would build on substantial investments, including funding immigration legal services particularly for children and families seeking asylum, Williams said that the Council should be able to pass its own budget and noted that the broken windows policing method that targets smaller crimes to stave off larger ones — which Mayor Bill de Blasio continues to embrace — can lead to deportation when people are arrested for low-level offenses such as jumping turnstiles.

“We don’t start chopping away at things that we know are gonna protect and keep a sanctuary city,” he said.

“The state controls way too much as it relates to the city of New York and are not nearly as progressive a body in the state as we are on the city level but should I be fortunate enough to be speaker would, with my colleagues, go up to Albany and force the issue and get them to do this,” Van Bramer said.

Rodriguez said that a “big victory” was the city booting U.S. Immigration and Customs Enforcement officials from Rikers Island. The city only cooperates with ICE over 170 violent felony offenses.

“We have to [be] using all our tools to restrict ICE to come to our city and going after our brothers and sisters from the immigrant community,” he said.

He also said that he would bring back waivers for nonprofits that provide immigrant legal services in schools and back a bill that tracks data on the number of minorities and women in government.

Levine noted that the city is now providing universal access to lawyers for low-income tenants facing eviction — for which he and Bronx Councilwoman Vanessa Gibson had been pushing for three years — and that all undocumented immigrants, including those with criminal convictions, will have taxpayer-funded legal services after a tense fight between Mayor Bill de Blasio and Mark-Viverito.

The next step, he said, is providing universal access to legal representation for all immigrants at a price tag of $10 million or $20 million a year.

“We see them in my office constantly, in all of our offices constantly,” he said. “These are people who do potentially have a path toward legal residency or even toward citizenship but need an attorney to help get there. And there is simply nowhere near enough free legal service.”

When asked how they would support under-funded communities such as African and Caribbean as well as Arab and Muslim immigrants, Williams and Van Bramer both committed to supporting budget line items specifically for those communities.

Van Bramer called for gender and race audits of city governments, including the City Council, to ensure there is diversity and inclusivity and said that, as a gay man himself, he understands the need for more support for underserved LGBTQ communities within the immigrant community. Williams pointed to the relief efforts he undertook following the earthquake in Haiti, noting that they have to figure out how to bring services directly to communities.

Levine said that more work needs to be done on language access despite the fact that the city added Arabic, French, Urdu and Polish to its language access law (the changes went into effect in early July).

“Many of the fastest growing languages in the city are woefully underserved,” he said, citing French and Wolof, a language of Senegal, Mauritania and The Gambia.

Williams said that he wants more translation services at the city’s Board of Elections while Rodriguez said he has a bill that would require translation services in any setting where city business is conducted, citing a City Council hearing as an example. Van Bramer called for strong enforcement of existing language access laws.

In response to a question from day laborers from New Immigrant Community Empowerment about how he would support them as part of his construction safety package, Williams said that he would push for funding for training and jail time for those who steal their wages.

Williams and Van Bramer, who were the only candidates left toward the end of the forum, committed to appointing staffers from immigrant backgrounds to top-level positions in their staff, supporting non-citizen voting, fighting every anti-immigrant policy that comes down from Washington and to providing at least half of leadership positions and committee chairmanships to their colleagues of color. 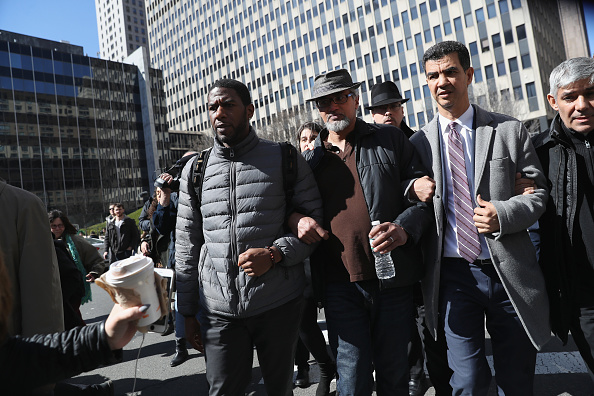