At a justice forum hosted by Rev. Al Sharpton’s National Action Network and other groups on Monday, Council members of color seeking to become speaker expressed concern about a white speaker addressing the needs of communities of color, and white candidates vowed to stand up for people of color and other marginalized groups.

The candidates fielded questions about police reform, public housing, the New York City Housing Authority lead paint scandal, and increasing the number of contracts given to minority- and women-owned businesses and enterprises.

Three of the candidates—Levine, Van Bramer and Johnson—are white and none of the candidates are women. Starting next year, the Council will only have 11 women members, a decrease from the current count of 13. The number dropped from 12 to 11 after incumbent Queens Councilwoman Elizabeth Crowley lost her bid for reelection.

Mark-Viverito, the second woman to lead the Council, is the first Latina and Puerto Rican to hold citywide office.

Some individuals, Sharpton said, say they want a black speaker because they have never had one before. The civil rights leader wants the “best candidate for the black community.”

“That could be anyone but I do note that I think it is horrific we’ve never had a black [speaker] because it gives the connotation we’re not qualified,” Sharpton said. “But that does not mean ’cause you’re black, I’m with you or that ’cause you’re white, you’re not right or that you’re Latino, we won’t support in terms of people in our community.”

Cornegy said he is “no longer ashamed” to state that it is a “reasonable request” that the speaker represent the demographics of the Council and the city.

“I think we can no longer be ashamed when other demographics have swept to lead in this city and weren’t ashamed,” he said. “And they demanded their rightful role and place in government and in leadership. So I’m not ashamed to say that there’s an appetite in this city currently for its leadership to be reflective of the demographics of the body and of the city of New York.”

Johnson said he recognizes the privilege he has as a white man but pointed out he is a gay man who is HIV positive and grew up in public housing. He said he is “extremely proud” of his record of standing with communities of color, women, LGBT individuals and vulnerable communities.

“When we decide who the leader is, it’s a valid thing to talk about because it is part of the experience, and we need to make sure that the leadership of New York City and New York State is reflective of New Yorkers,” he said.

Levine said the lack of women in the race is due to an “inexcusable failure of our political system” but pointed out that there is a “little bit of good news” in that four women are joining the Council, including women of color. He said that he “proudly” supports the “21 in 21” initiative started by City Council Speaker Melissa Mark-Viverito, Queens Councilwoman Elizabeth Crowley and others, which seeks to elect 21 women to the Council by 2021.

“The time to start working on that is now,” he said. “We can’t wake up in three or four years and begin to recruit candidates. We need to start empowering women candidates in every one of our districts and all of us, I believe, are going to be term-limited out so we can seek people to succeed us.”

He emphasized that he was a public school teacher in the South Bronx teaching bilingual math and science to middle school students and that he founded a community development credit union in Washington Heights. He also pointed out that he has been elected twice by large margins in his district, which is overwhelmingly African-American and Latino.

And while he does not believe a candidate should be speaker because of their skin color, he said that of the candidates of color, one has the strongest qualifications.

“There are five of us with an array of orientations, an array of how we do things,” Williams said. “One of us probably has the qualifications that everybody is looking for and if that’s the case, we should check—all of us should check our privilege and encourage the leadership that’s needed to reflect this city.”

Van Bramer, a gay man, stated that no community should ever be afraid to fight for and demand power. He said being an ally involves listening and understanding that people of color and women should be “centered in the conversation that we’re having about injustice in the city.”

The councilman said he recognized the impact that not having a woman on the Council would have as well as the need to have more minorities in senior of leadership positions in the city, state and federal governments.

Torres said he is black, Latino, gay and the product of his mother, his sister and his grandmother. He said the Council, the Democratic Party and the progressive moment have done “too little” to remove the structural barriers women face in running for public office.

And he noted that politics “has never been more racialized,” pointing to the “white ethno-nationalist atmosphere” under President Donald Trump, police brutality and the immigration issue.

“The two people who run our city are the mayor and the speaker who set the land use priorities, the budget priorities, the policy priorities and so the notion that we would have two white males govern a majority-minority city in a racially charged political moment is a problem,” he said.

Under Mark-Viverito, he said, there have been more staffers of color in the Council and more resources going into communities of color.

“I’m not suggesting that a white male cannot have empathy for the plight of people of color,” Torres said. What I am suggesting is that empathy can only take you so far. There is no substitute for the lived experience of racial oppression in America.”

Richards said the candidates were interviewed by the City Council Women’s Caucus, which secured commitments from the candidates. He wants to see more women on the budget negotiating team, chairing prime committees and in community boards. Rodriguez said he supports a bill by Brooklyn Councilwoman Laurie Cumbo that would mandate that the city track data on the number of minorities and women in government. 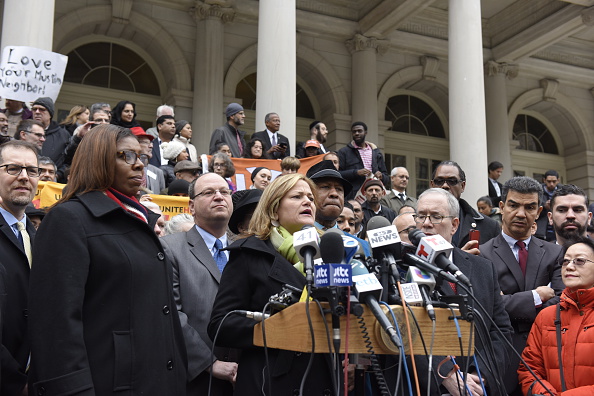