The city is ramping up police presence at the annual New York City Marathon this weekend in the aftermath of a truck terror attack in Lower Manhattan this week that claimed eight lives.

On early Sunday morning, the NYPD will activate its Joint Operations Center, which will be staffed by representatives from more than 20 local, state and federal agencies that will be monitoring the event as it progresses throughout the day, according to NYPD Chief Carlos Gomez.

The Police Department also more sand trucks and blocker vehicles — the most that it has ever used at any detail in the city, Gomez said. The NYPD’s counterterrorism division will conduct surveys and assessments to determine which locations are best to place the sand trucks and NYPD vehicles.

It also increased the number of observation teams and countersniper teams in Manhattan but will also place them “strategically” in other boroughs. And there will  be heavy weapons teams from the Emergency Services Unit, the Critical Response Command and the Strategic Response Group.

More than 51,000 runners and more than 2 million spectators are expected to participate in the marathon.

“My message is we will keep them safe,” Mayor Bill de Blasio told reporters at the NYPD headquarters on Friday afternoon. “We’re working very, very closely and very well with our federal and state partners and there is extensive amount of effort being made and additional resources being used to keep everyone safe.”

The mayor reiterated that there are no threats.

“I wanna once again assure all New Yorkers there are no credible and specific threats against the marathon or against New York City,” de Blasio continued. “You will see a lot of police presence. I think more and more people are not alarmed by that. They understand that means they’re safe. They’re there to protect you. You’re going to see them out in force.”

State agencies, including the New York State Police, the National Guard, the Division of Homeland Security and Emergency Services, the Metropolitan Transportation Authority and the Port Authority of New Jersey and New York are increasing security at high-profile sites in the city, including airports, bridges, tunnels and mass transit systems.

“Out of an abundance of caution, we are stepping up security measures at the Marathon with additional patrols and resources from an array of state law enforcement agencies,” Cuomo said. “We have the finest security forces in the globe and they will remain vigilant throughout the weekend.”

Sayfullo Saipov, a 29-year-old Uzbek immigrant who came to the country in 2010, has been charged with using a rented pickup truck to mow down a crowd of pedestrians and bicyclists, killing eight and injuring 12 in the worst terror attack in New York City since 9/11, according to the Police Department. 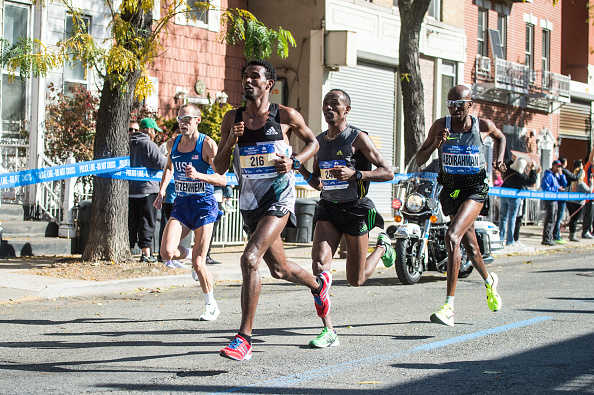