On paper, Virginia’s Democratic nominee for Governor, Ralph Northam, should be a shoe-in. He easily defeated a progressive rival in the primary and faces a Republican who has never held office before. He’s the Lt. Governor for a popular Virginia Democratic governor who is term-limited. Yet Northam could lose the race because he faces critics from the left, as well as a flurry of ads from Republicans that resemble a Trump campaign.

Virginia’s gubernatorial contest, just like New Jersey’s, are often seen as the first test of a president’s party. More often than not, the incumbent party loses these contests because the opposition is rallying to kick-start the comeback tour. In Virginia, the party that won the presidential election went on to lose in 1989, 1993, 1997, 2001, 2005, and 2009. Democrats should be on track to win this election, but it’s closer than anticipated.

Why Northam Should Be Winning Big

Northam should be the odds-on favorite to win. He won his Lt. Governor race four years ago, just as fellow Democrat Terry McAuliffe broke the presidential party losing streak, eking out a narrow win by a little more than 55,000 votes in the governor’s race. Mark Herring won the attorney general race for Democrats by an even closer margin. And with Democratic Senators Mark Warner and Tim Kaine, Virginia is looking more blue than red.

Moreover, the primary season was a good one for Northam. Despite support from Sanders and progressives, Northam defeated former Congressman Tom Perriello 56 percent to 44 percent.

In contrast, the primaries were a near-disaster for Ed Gillespie, the Republican nominee. The former Republican National Committee (RNC) chairman was dogged by a scrappy former Trump campaign chair from the state. Little known Corey Stewart mocked Gillespie as “Establishment Ed” and vigorously opposed any removal of statues for figures like General Robert E. Lee. Gillespie, the 2014 US Senate nominee from the Republicans, won by just a hair. The Virginia GOP was torn asunder. Virginia looked like a cakewalk for Democrats, who opened up a sizable lead in the polls.

And Northam remains popular with Virginians. He has a “very enthusiastic” rating of 43 percent in the polls, topping Gillespie, the Democratic Governor four years ago, and even Senator Kaine when he won his gubernatorial race, as well as every Republican and Democrat since 2005.

Sometimes, a candidate gets such a large lead that he or she becomes complacent. Supporters don’t have the same level of urgency as they would if the race was neck-and-neck. And often, the candidate trailing so badly comes up with an innovative approach to energize the race.

Gillespie did just that. The Republican nominee started to attack Northam for failing to oppose sanctuary cities. The former RNC Chair, who had once pushed the party to be more open to bringing in minorities, ran ads highlighting MS-13, the notorious El Salvadoran gang, implying that by taking a liberal immigration position, Northam was going to go soften crime. Such ads were criticized for being similar to Willie Horton ads, the race-baiting anti-crime ads from the 1988 election, with Hispanics as the new target.

Mean-spirited or not, these campaign tactics rallied Trump’s supporters. Gillespie closed the gap in some cases, even drawing ahead in some polls, which have sees-sawed in the closing days of the Virginia contest. The race is either considered “Leans Democratic” or a “Toss-Up” now.

Virginia Democratic Centrists Could Be Undermined by Progressives

The first controversy was over a proposed pair of pipelines. Activists on the left have attacked Northam for having a stance that involves a pro-science and proper procedure position, instead of shutting the proposed pipelines altogether.

The Roanoke Times took issue with Northam’s opponents. “Why are some environmentalists so upset with Northam?” the editorial page noted. “He’s essentially stating the truth: This is mostly a federal issue. To the extent the state government is involved, he says he’ll let science determine whether the Department of Environmental Quality issues the relevant permits for the Atlantic Coast Pipeline and the Mountain Valley Pipeline.”

The editorial went on to point out that Gillespie, connected to Enron, would be far more of a pipeline supporter. His victory would undoubtedly produce a policy that would undermine any progressive environmental position, which Democrats have struggled to maintain after the Obama administration.

The second attack has come from a few who claim Northam isn’t fully embracing his Lt. Governor Justin Fairfax, an African-American candidate. Such attacks assert that Northam isn’t doing enough to motivate minorities to vote and that he’s spending consulting dollars on white firms, with attacking Gillespie’s ties to Enron.

Such an argument makes even less sense than the environmental argument. Northam and Fairfax have campaigned together. He’s running ads linking Gillespie to Enron to win over progressives mad about the pipeline. And it should be pointed out that if Northam and Fairfax win, Northam will be term-limited in four years, making Fairfax the favorite to win the nomination and the fall election. Dragging down Gillespie will also undermine Fairfax, whose standing in the polls (a narrow 4-point lead) is likely tied to Northam’s fate. The Democrats could be doing more outreach, but Hispanic leaders dispute the argument that Northam has abandoned minorities.

The true rationale for these progressive punches can be traced back to the summer. Shocked by Perriello’s loss, members of the left have been looking for revenge against Northam, the same way a handful of Sanders supporters sought to make trouble for Clinton after she clinched the nomination. Perhaps they hope that if Northam loses, they can make Perriello the nominee in 2021. Attempts to argue that Northam’s centrism is bland are undermined by the evidence of the Lt. Governor’s voter enthusiasm, noted in those Washington Post polls.

These may only reflect a small number of voters, but the incredibly narrow 2013 electoral win for the Democrats proves that every vote counts. And even the slightest defection or withdrawal of support for Northam will spell trouble for the Democrats in more than just Virginia. It will be a body-blow to the party nationwide.

John A. Tures is a professor of political science at LaGrange College in LaGrange, Ga. He can be reached at jtures@lagrange.edu. His Twitter account is JohnTures2 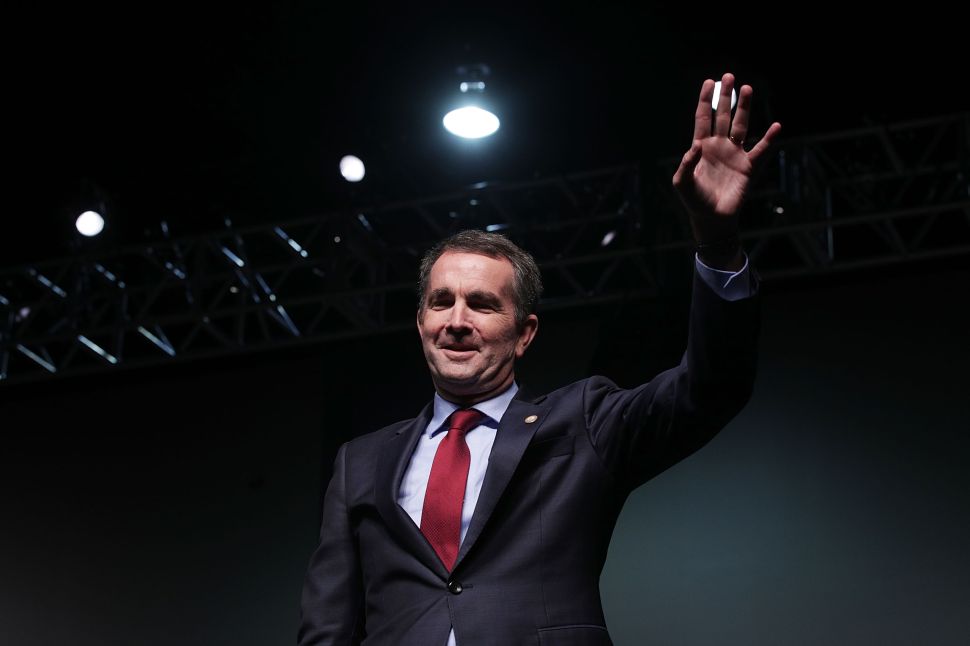