Ever since Moscow’s Little Green Men seized Crimea in early 2014, we’ve been in a new Cold War with Russia. To the consternation of wishful-thinkers, as Vladimir Putin’s confrontation with the West has become transparent, the reality of what I termed Cold War 2.0 almost four years ago has grown difficult to deny. Since the Kremlin’s revanchism is driving this conflict, we’re in it whether we want to be or not.

Europe is the central front in Cold War 2.0, thanks to geography and history. Putin’s war on, and in, Ukraine continues on low boil, while the Russian military regularly delivers provocations—a too-close warship here, an aircraft buzz there—all along NATO’s eastern frontier, sending an aggressive message. Major military exercises like September’s Zapad mega-wargame demonstrate Putin’s seriousness about confronting the Atlantic Alliance.

What Putin wants was the subject of my recent interview with Antoni Macierewicz, Poland’s plain-spoken defense minister. What the Kremlin boss seeks, he explained, is restoration of the Russian empire, to which Ukraine (or at least most of it) belonged for centuries. “Putin understands that there is no empire without Ukraine,” he added.

However, Kremlin provocations extend far beyond the former Soviet Union, as Macierewicz elaborated:

The first move, I think, is Ukraine. But I don’t exclude a military attack in the Far East. They want to distract American attention, prolong the front of confrontation in order to create a favorable situation for aggression in Europe. If you look at the map, Russia is always helping the enemies of America: deep ties to North Korea, involvement in Afghanistan and Syria, backing Iran, and so on.

This assessment sounds alarmist at first, particularly the mention of possible aggression in the Far East, but Western intelligence agencies that track Russian moves have been thinking along similar lines—though they seldom say so in public. Therefore, it’s worth taking a brief look at what Putin’s up to, and where.

Russia’s footprint on the North Korean crisis is impossible to miss, and since that’s the world’s most dangerous strategic predicament at present, Moscow’s less-than-helpful role merits attention. Although Beijing is clearly exasperated by the unhinged antics of its semi-client regime in Pyongyang, Moscow seems perfectly pleased with the hazardous games played by North Korea.

And why not? Pyongyang creates strategic confusion for the Americans, which the Kremlin always enjoys. Russian military and intelligence support to the increasingly isolated Kim regime is an open secret, while Putin’s sanctions-beating lifelines to Pyongyang are public and deeply annoying for both Beijing and Washington. Although Moscow is no more eager to see all-out war on the Korean peninsula than the Chinese or Americans, keeping the nasty Kim regime in place frustrates and distracts the Pentagon, which is Russia’s real aim here. Not to mention that backing North Korea is viewed in the Kremlin as payback for NATO’s “meddling” in Ukraine.

A similar pattern can be detected in Afghanistan, where American-led forces are in their sixteenth year of a seemingly endless counterinsurgency against the Taliban—and it’s not going well. Therefore, Moscow has been giving clandestine support to the Taliban. A few months back, the U.S. military command in Afghanistan admitted that Russian arms were reaching the Taliban. That clandestine Kremlin assistance is costing lives is increasingly obvious. Russian aid has reached Taliban “special” units that launch attacks on Afghan military bases.

A recent spate of Taliban assaults on Afghan forces, including nighttime raids, has inflicted unexpected casualties on American allies. Of concern to the Pentagon, Taliban fighters equipped with Russian-made night vision gear have been ambushing Afghan military and police with lethal effects. It seems only a matter of time before American troops are killed by Russian-equipped Taliban special operators.

While the Kremlin is in truth no fonder of the Taliban than the West is, this spoiler strategy is inflicting pain on the Americans and our clients in Kabul, which is all the Russians seek here. Not to mention that payback against us in Afghanistan, three decades after U.S. clandestine aid killed and wounded thousands of Soviet troops in that country, must be delicious for Moscow, where revenge has always constituted a rational strategic motivation.

However, the real fight is in the heart of the Middle East, where Russia and its Iranian allies are fundamentally transforming the region at high cost in blood. Together, Moscow and Tehran are challenging the American-constructed security system that’s an ailing holdover from the last Cold War. Even recent cooperation between America’s two clients, Israel and Saudi Arabia, appears insufficient to turn back the rising Russian-Iranian tide across the Middle East.

We only have ourselves to blame for this. Putin has taken full advantage of the blank check written by Barack Obama in September 2013 when our president backed away from his “red line” in Syria, in effect outsourcing that country and its terrible civil war to the Kremlin. As I predicted at the time, the strategic consequences of Obama’s decision have been grave, making Putin the new Middle East power-broker—a message that was missed only in Washington think-tanks.

For his part, Donald Trump has been only too willing to let his Russian counterpart and would-be buddy do whatever he likes in Syria, Iraq, and elsewhere. Moscow’s military intervention in the Middle East, begun under Obama, continues to flourish and shows no signs of abating. The balance of power in this vital region has shifted decisively from Washington to Moscow at appalling cost in human life, though none of that troubled President Obama very much, and it seems to trouble his successor not one bit.

It would be naïve to think Putin restricts his poking to the Eastern Hemisphere. Closer to our home, the bear’s paw-prints are easily detectable. Take Venezuela, the Bolivarian dictatorship and economic basket-case that’s barely a viable country at all anymore, between currency collapse and serious food shortages. Russian money is keeping this anti-American regime afloat, and last week Moscow’s refinancing of $3.15 billion it’s owed by Caracas gives the flat-broke country a bit of financial breathing room. Without Russia, Venezuela would likely implode, and it’s worth considering whether the Bolivarian regime is actually Putin’s newest satellite state. Although sanctions and low oil prices have diminished the Kremlin’s largess toward anti-Americans all over the globe, the prospect of having a loyal (because utterly dependent) client so close to the United States seems too good for Putin to pass up.

Then there’s Cuba, Moscow’s “fraternal ally” from the last Cold War, and apparently the second one too. Just 90 miles from Key West, Cuba has long served as a reliable base for Russian provocations against us, and nothing’s changed. Russian economic aid to that impoverished island is back, after falling off after 1991, and the Kremlin has begun to reopen its military and spy bases in the country, which were shuttered after the Soviet collapse.

Western intelligence has detected a Kremlin hand behind the recent rash of sonic attacks on American and Canadian diplomats in Cuba. While Havana flatly denies that anything untoward has occurred, two dozen U.S. diplomats in the country have suffered serious health problems due to this mysterious problem, which remains officially unexplained. However, it’s known that the KGB experimented with sonic weapons, while an attack of this sophistication is widely considered to be beyond the technical abilities of Cuban intelligence. “Of course it was the Russians,” explained a senior NATO security official to me recently about this strange case. “We have no real doubt of that.”

In all, this amounts to a worldwide Russian effort to push back against what’s left of American hegemony. Since Moscow lacks the ability to directly counter NATO and the U.S. militarily, the Russians are provoking and prodding where they can with the techniques of Special War: it’s what the Kremlin does best. This should be considered a spoiler strategy, a strategy of tension—what left-wing Italians in the 1970s termed la strategia della tensione.

Vladimir Putin seeks to expand Russian power on the cheap while causing problems for America and our allies wherever he can—without direct military confrontation. So far, the Kremlin seems to be playing its rather poor hand well at the tables of global power, and Putin’s strategy of tension shows no signs of abating. Although the Trump White House is paying no attention to this new reality, the Pentagon and our Intelligence Community certainly are. 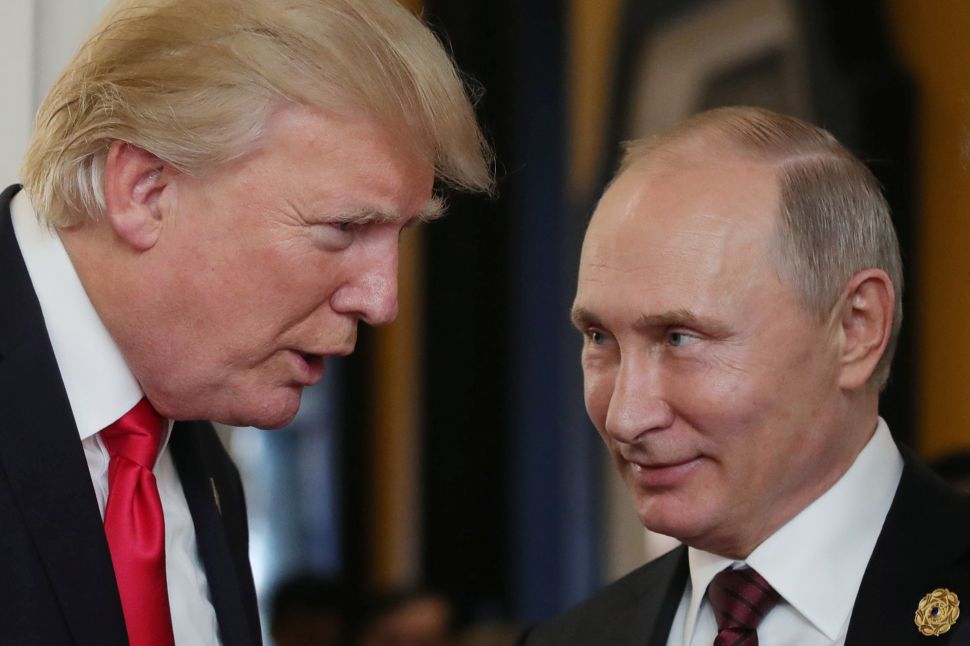