Providing the American military with a reasonable facsimile of the traditional Thanksgiving feast, wherever our forces are deployed around the globe, is a longstanding practice of our Defense Department. Yesterday, the Pentagon served up nearly 100,000 pounds of turkey, plus all the usual trimmings, to U.S. military personnel in countries around the globe, including war zones like Afghanistan and Iraq.

Some presidents have visited the troops serving in harm’s way—back in 2003, George W. Bush showed up in Baghdad by surprise to serve turkey to our troops—but Donald Trump, for his first presidential Thanksgiving, was content to address our military via video link from his Mar-A-Lago resort in Florida. It was the usual Trumpian reality TV boilerplate: “You’re very, very special people…We’re really winning. We know how to win…They [Presidents Bush and Obama] were letting you play even. We’re letting you win.”

As usual too, the veracity of the president’s statements seems debatable, at best, and not everybody was pleased with Trump’s Thanksgiving address to the troops. Mark Hertling, a retired U.S. Army three-star general, denounced Trump’s assessment as “somewhat insulting” to our forces, some of whom have been at war for 17 years and counting.

Serving the troops a traditional Thanksgiving meal, no matter where they are deployed, is a considerable logistical hassle for the Pentagon, while a presidential visit into a war zone—with its massive entourage and security on a gargantuan scale—is a much bigger one. It thus can be safely assumed that most of our military members were only too happy to hear President Trump pontificate via video rather than in-person.

In truth, Thanksgiving in the field constitutes a Pentagon fetish of sorts, and our military’s habit of bringing turkey with all the trimmings to combat zones hasn’t always been appreciated by troops who are trying to fight and survive. However, the photo-worthy escapade is deemed to be popular on the home front, so the U.S. military keeps executing Thanksgiving operations whether the troops want it or not.

The classic case was 73 years ago, the Second World War’s last Thanksgiving. Things weren’t going well in Northwest Europe in late November 1944, where Hitler’s Wehrmacht remained full of fight, despite being defeated in detail in Normandy three months before. The victorious optimism of late summer, when “Home by Christmas” seemed plausible, had given way to the realization that the Germans were still a tenacious foe – and there was a lot of fighting left to be done.

The Germans had retreated to their own borders, their armies in tatters, and while the war’s ultimate outcome could not be in doubt, between the Western Allies on the Third Reich’s western frontier and the Red Army surging on its eastern border, that was no comfort to the American troops holding the line that Thanksgiving.

Nowhere was this reality more painful than in the Hürtgen Forest, a dark and hilly patch of woods just inside the German border next to Belgium, a 50-square-mile piece of hell for the American soldiers fighting there. Despite being the longest and hardest-fought battle for the U.S. Army in the Second World War—G.I.s moved into the forest in mid-September 1944 and didn’t clear it of the enemy until early February 1945, nearly five months later—the fight for the Hürtgen Forest has been all but forgotten. While most Americans have heard of Normandy and the Battle of the Bulge, historic victories, perhaps one citizen in a hundred would recognize the name of the battle that, according to the army’s official account, cost over 100,000 G.I.s dead, wounded, missing, and crippled by illness.

It’s not difficult to figure out why it fell down the memory hole. The army wanted to forget about this disaster, which was undeniably a German defensive victory. Lieutenant General Jim Gavin, the legendary wartime commander of the 82nd Airborne Division, pronounced the Hürtgen Forest debacle “one of the most costly, most unproductive, and most ill-advised battles that our army has ever fought,” an accurate assessment.

The worst part of the battle was that it never should have taken place at all. The forest only became an objective when the U.S. Army moved into it. The Germans could never figure out why the Amis entered the forest, stalled bloodily, then kept at it for months. It made no military sense, particularly because our deadly trump-cards—outstanding artillery and tactical air support—counted little in the dense forest. Artillery shells couldn’t penetrate the thick woods, bursting in the treetops, so the Hürtgen became an infantry fight par excellence.

German infantry weapons and tactics outpaced ours, no matter what Spielbergian fantasy films tell you, and understrength Wehrmacht battalions of teenagers and middle-aged men, holding easily defensible terrain, made mincemeat of 11 American divisions, sent one after the other into the forest to die. Month after month, a regular stream of half-trained infantry replacements was fed into the Hürtgen meatgrinder to keep the imaginary offensive going—advances were counted in meters, not miles—and most of them became casualties quickly.

As a result, the Hürtgen Forest resembled the Great War’s hideous Western Front, where doomed infantry tried, and usually failed, to make headway against machine guns, mines, and mortar-fire. Senior officers in the comfort of the rear, blissfully ignorant of tactical reality, kept making the same mistakes. Battalion after battalion was sacrificed to take a village, a trail, a hilltop, only to be evicted by a sudden, violent German counterattack. Then it was the next unlucky battalion’s turn. Ernest Hemingway visited the forest to check out the battle for himself and summed the Hürtgen up as “Passchendaele with tree bursts.”

The unlucky American division fighting in the heart of the Hürtgen when Thanksgiving arrived was the 8th Infantry. It moved into the woods as part of Operation Queen, which kicked off on November 16 with a massive bombardment by 1,200 American heavy bombers. That stunning display of firepower shook the earth and shattered eardrums, but made little dent in German defenses, and the 8th Division quickly got bogged down in the now-familiar bloody morass in the dense forest.

When Thanksgiving arrived on November 23, 8th Division headquarters wanted to provide the infantry a turkey meal with all the trimmings, per high command edict. Word spread to the frontlines, where the notion was met with disbelief. The 8th Division’s 121st Infantry Regiment was at the sharp end of the spear in the Hürtgen for Thanksgiving, its three depleted battalions spread out in the woods, trying to pry patches of ground from the tenacious enemy.

The regiment’s 2nd Battalion was in intense combat that day. First Lieutenant Paul Boesch, a professional wrestler before the war, was leading one of its three rifle companies, and he picked up the field telephone when it rang. It was battalion headquarters: “Happy Thanksgiving. We’ve got a hot turkey dinner here for every man in the outfit,” announced the staff officer, who explained that the food was on its way to Boesch’s company.

Boesch was incredulous: “Are you guys nuts? It’s almost dark and my carrying parties have already made the trip up the hill with rations and . I can’t send them up there again. Besides, they can’t feed a hot meal in the positions they’re in now. Good God, they’re right on top of the Jerries.”

Battalion made it clear that these orders came from 8th Division and would be followed—besides, didn’t the lieutenant want his men to have a proper Thanksgiving meal? Boesch explained to his battalion commander that this order would get men killed, adding memorably, “Of course I want to see them get a hot meal. I want to see them get three hot meals a day and a dry bed every night and a babe to sleep with, but let’s save the turkey until they can pull back where they can enjoy it. Who the hell knows it’s Thanksgiving except some silly bastard in the rear who gets hot meals anyway and just wants a change of diet?”

Boesch knew it was futile, orders had to be followed, even stupid ones, so he got together a party to fetch the Thanksgiving meal, an operation that was to be done in view of the enemy; their only protection would be the darkness of the coming night. “Division wants us to remember our blessings and be thankful. So we eat turkey and like it,” the lieutenant explained to one of the men tasked with delivering the turkey.

Exactly as Boesch had predicted, all hell broke loose when the turkey-bearers reached the company’s forward platoons. German artillery pummeled the G.I.’s “just when we got there with the goddamned turkey,” explained one of the survivors. Dead and wounded piled up and, worst of all, Boesch was unable to send medics with stretchers up the hill to rescue the fallen. In the darkness, they were likely to stumble into the enemy, who were practically on top of American positions. Boesch reluctantly delayed his medics until dawn. His battalion commander, informed of the disaster, rang again: “I’m sorry. Very sorry,” he stated.

Paul Boesch was twice wounded but survived the Hürtgen Forest, unlike many of the men under his command. After the war he resumed his professional wrestling career, becoming a minor celebrity (he is believed to have invented mud wrestling). He published an angry memoir of his Hürtgen experience that provides a much more accurate picture of the realities of war than Hollywood movies can. This Thanksgiving, no American warriors were killed in action, unlike in 1944, and that’s something we should all be thankful for. 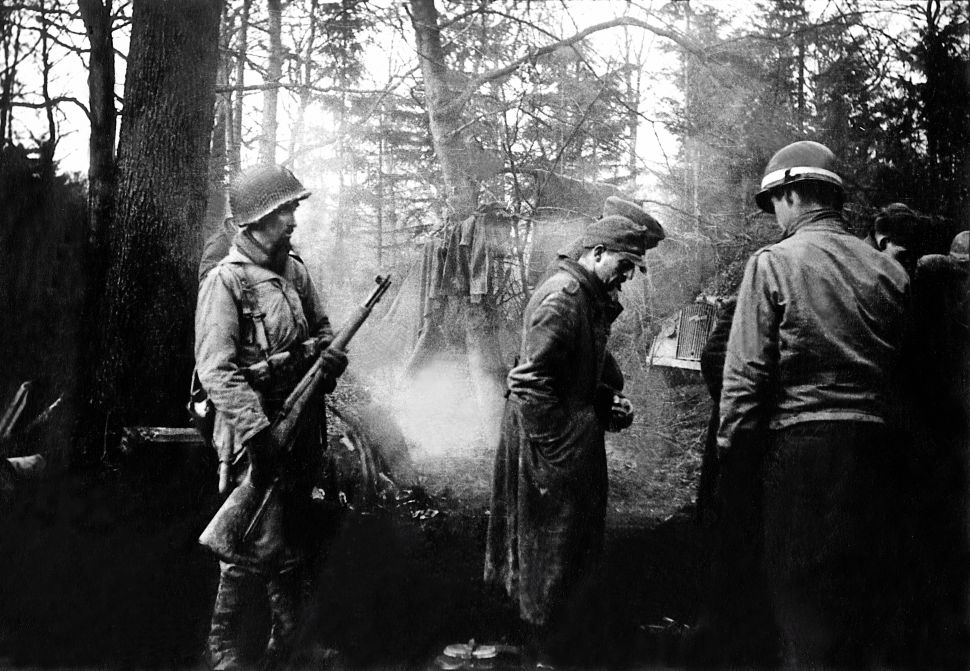