Shortly before he died, Steve Jobs imparted some final words of wisdom to his successor as Apple CEO, Tim Cook. “Among his last advice he had for me, and for all of you, was to never ask what he would do,” Cook said at Jobs’s 2011 memorial service.

Yet the new iPhone X (pronounced “ten”) is in many respects exactly what Jobs would have done. Famously mercurial, sometimes maddeningly inconsistent from week to week or even day to day, he would have been entirely capable of rewriting many of the rules that have grown up around the iPhone over the last 10 years.

The result would have been something fresh, new and different, that pointed the way forward for the next generation of devices—something, in short, a lot like the iPhone X.

If this ultra-expensive ($949 to $1,149) bauble isn’t quite the revolution the original iPhone was, it embodies the biggest changes in the decade since. The most obvious differences are in the hardware, but the most important are in how the phone actually works.

Start with the screen—the first one Apple has ever used featuring OLED technology. At 5.8 inches, it’s the largest display ever on an iPhone, exceeding even the 4.7-inch and 5.5-inch ones on its more traditional siblings, the iPhone 8 and 8 Plus. Yet the X is far slimmer and markedly lighter than the 8 Plus.

That’s largely because of what’s missing: the bezels around the screen that added heft and enabled the presence of the Home button on every previous iPhone. Like Samsung’s beautiful Galaxy S8, the iPhone X is essentially all-screen and nothing but.

Replacing the Home button is the controversial black notch atop the screen housing the new 3D camera—which Apple calls TrueDepth—that makes Face ID possible. That’s the facial-recognition software that allows you to unlock your phone, authenticate ApplePay transactions and launch apps simply by glancing at the screen.

Surprisingly, I’ve found Face ID not only more seamless but also more reliable than the Touch ID fingerprint system it replaces. With Touch ID, even a small amount of moisture on your finger (or, conversely, extremely dry skin) can trip it up. By contrast, I’ve tried Face ID in many different lighting conditions, with and without my glasses on, and it continues to work like a champ.

Face ID isn’t the only thing enabled by the TrueDepth camera. There are also animojis—textable animated icons that mimic the facial expressions of their creators. It took about 15 minutes from the iPhone X’s release last week before “Animoji Karaoke” broke the Internet.

As for the notch, it’s not much of a distraction. On the home and app screens, it gives the phone a distinctive look that calls out, “Hey, look at me—iPhone X over here!” Videos play zoomed out by default, so they don’t take up the full width of the screen and thus render the notch invisible; you only see it if you make the video fill the entire screen, when, yeah, it’s not pretty.

The lack of a Home button means you’ll have to learn some new ways to navigate iOS 11. With nothing to tap, you get back to your home screen by swiping up from the bottom of the display. A halfway upward swipe lets you scroll through open apps; close one by pressing on it until the red close button appears. The Control Center is summoned by swiping down from the right side of the top, next to the notch; swiping down from the left side summons your notifications.

The new gestures take a bit of getting used to—but only a bit. Within a couple hours, the navigation felt entirely natural, to the point that I began getting a little impatient with my iPad’s suddenly old-fashioned ways.

The changes extend inside the iPhone X, where two batteries maintain enough juice to get the phone through a full day of normal use with little concern. (Early tests suggest it’s very close to the 8 Plus.) The rear-facing camera is predictably excellent, with the same dual-lens setup that debuted on last year’s jumbo-sized iPhone 7 Plus.

Yeah, the company now packs a pair of wired Lightning earbuds with every phone—but the popularity of its wireless AirPods clearly points toward a day when the iPhone will neither have nor need physical ports of any kind.

The iPhone X isn’t the first time Apple has abandoned a Jobsian precept since his passing; his legendary disdain for styluses, for example, didn’t prevent the introduction of the Apple Pencil a couple years back.

Still, this new iPhone represents a firm break with much of what preceded it—not only in previous iPhones, but also in the legion of Android phones as particularly epitomized by Google’s new, ultra-play-it-safe Pixel 2 and Pixel 2 XL. By not sticking slavishly to what Jobs did, Apple ended up doing exactly what Jobs preached: Think different. 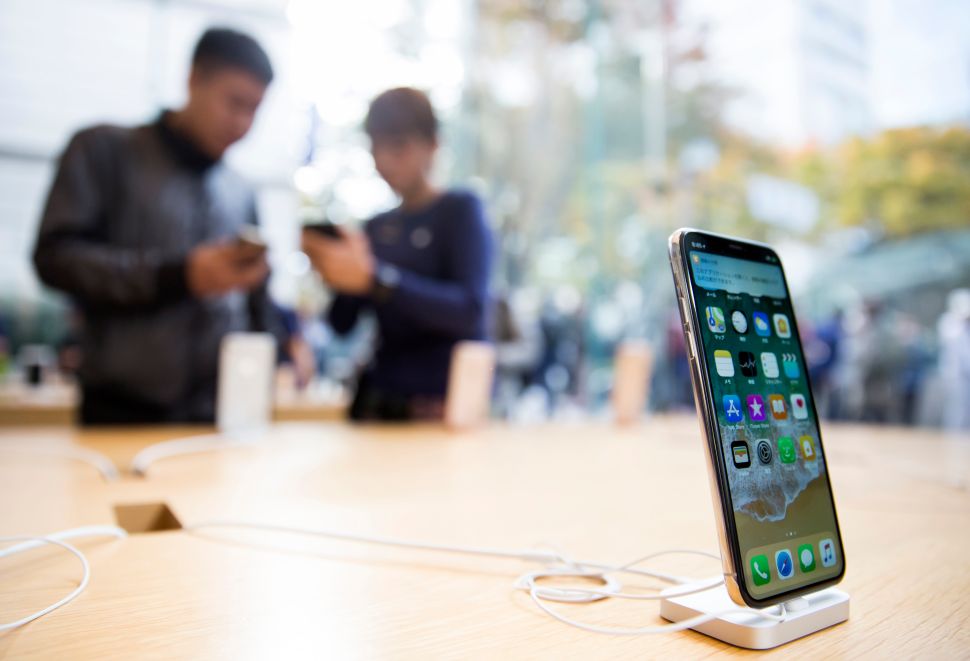