Self-assured, fastidious, unusual, written with sass and directed with sensitivity and style, Lady Bird is a year-end surprise that lands in 2017’s pile of mediocrity like a stray emerald in a pile of discarded rhinestones. The writer-director is the critically acclaimed actress Greta Gerwig. Riding in on waves of advance attention on the film-festival circuit, Lady Bird, her feature debut in both guises, deserves applause. It hit me unexpectedly—like a snowball between the eyes.

Everything about Lady Bird is different, including the setting. What was the last film you saw that takes place in Sacramento?  Taking a fresh look at the awkward, frustrating transition from lonely adolescence to terrifying womanhood, Gerwig’s semi-autobiographical tour de force about growing up in California’s capital captivates from start to finish. The always splendid Saoirse Ronan looks as dismal as humanly possible as miserable 17-year-old Christine (“Lady Bird”) McPherson, a high school student on the verge of graduation who dreams of any change in life that comes her way, as long as it gets her out of her dead-end life in the suburbs. With bad skin and ugly raspberry streaked hair that always looks like it desperately needs shampoo, Lady Bird enters her senior year experiencing sensations new and familiar, with starling serendipity. She starts dating Danny (the enchanting Lucas Hedges, who crashed through the unknown barrier to stardom last year in Manchester by the Sea) and thinks she’s found true love until she discovers him in a closet, passionately kissing another guy. Later she loses her virginity to Kyle, the cutest boy in school.

She adopts new friendships and outgrows others. After attending a school so progressive that, for a senior class musical, the drama club stages a production of  Sondheim’s Merrily We Roll Along, she agonizes over how to get a scholarship to an Eastern university her parents can’t afford instead of the California state college they urge her to settle for. She fights with her adopted brother, worries about her alcoholic, manic-depressive father (playwright Tracey Letts of August: Osage County, doing an impressive acting turn), and declares war on her chain-smoking, hard-nosed, penny-pinching mother (a fabulous, scene-stealing Laurie Metcalf, who plays every charged emotion with a three-dimensional passion that I predict will easily get her an Oscar nomination). Even when it implodes, the dialogue sparkles. (“Are you two getting a divorce over this?” “No,” says her meek, exasperating father. “We can’t afford to.”) With her overwhelming refusal to accept second best, her eventual scholarship, and her parents re-financing their house, Lady Bird does finally get to New York in the end, and every emotional hurt, real or imagined, is discarded in favor of divided emotions that symbolize maturity. Reading a cache of letters her mother never mailed that her father packed with her belongings, Lady Bird realizes at last that the years of harsh criticism and biting sarcasm she endured were only superficial masks to cover up the love her mom couldn’t express. The emotional impact as she faces the future, in a brave new world, resonates with the viewer in a surge of joy.

In addition to her other obvious strengths, Gerwig expresses a real talent for perfect casting, and directs every actor with the kind of generosity that eschews clichés—especially Saoirse Ronan. In the end, even her acne clears up—not as a makeup-department triumph, but as a natural part of the aging process. You’ll find no wasted scenes devised to pad the length, no overwrought monologues that distract from the film’s brisk tempo, no exchange of words that ring false. Lady Bird is that rare movie in which everything astonishes and leaves you charmed, breathless, and anxious for more. 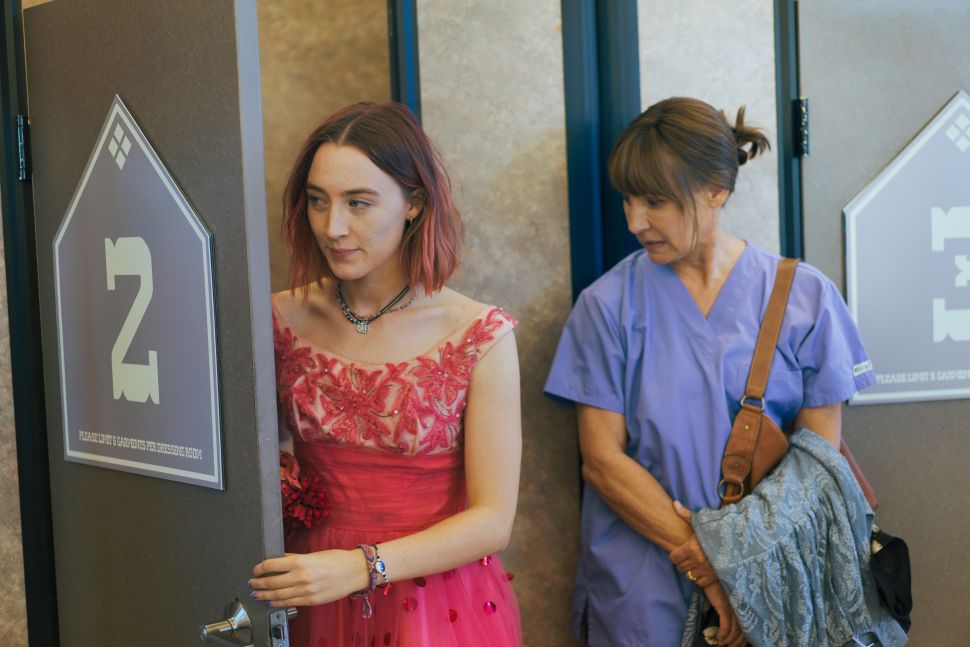