Sidney Lumet’s 1974 masterpiece Murder on the Orient Express was everything a lavish murder mystery on a train should be: a tasty example of pure escapist entertainment done with a modicum of style, wit and elegance, sumptuously mounted, crisply and artfully directed and gorgeously photographed. Brimming with rich performances, the all-star cast was headed by Albert Finney as the quirky Belgian detective Hercule Poirot, investigating another murder most foul by Agatha Christie, with 13 suspects that included Sean Connery, Ingrid Bergman, Lauren Bacall, Vanessa Redgrave, Anthony Perkins, Jacqueline Bisset and Rachel Roberts. The new, inferior and totally unnecessary 2017 re-make is a sorry disappointment in which nothing measures up to the Sidney Lumet movie, including the train. As soon as everyone leaves Istanbul heading for Paris, it’s clear that they might as well be on an Amtrak coach on its way to Cleveland.

Directed by Kenneth Branagh (who also ill-advisedly cast himself as Poirot), from a follow-the-dots screenplay by Michael Green, this lame version also boasts what might be considered an all-star cast, considering the meager pickings today’s casting directors classify as stars. Aside from Johnny Depp, Judi Dench and Michelle Pfeiffer, all of whom are reduced to the status of marquee-value bit players, I don’t see a real star in sight.

In the event that there just might be someone out there unfortunate enough to be unfamiliar with the book by Agatha Christie, first published in 1932, or to have missed the rare and precious 1974 movie, I will try not to give away too much of the intricate patchwork puzzle of a plot, which would be the same thing as eating dessert before the main course of an intricately prepared banquet. I’ll just say that while Branagh’s revised version retains the basic elements, the mistakes he makes are numerous.

Instead of cutting to the specifics right away, he delays the action with a long, ridiculous and superfluous prologue as Monsieur Poirot visits the Wailing Wall of Jerusalem to solve a jewel robbery before boarding a boat to Turkey to climb aboard the train that will take him to his next case. Every first-class seat is taken, and by the time he persuades the rail line supervisor (handsome newcomer Tom Bateman) to give up his own compartment, so many passengers have been introduced that the audience is already confused and exhausted. In a role made memorable by Richard Widmark, the murder victim in the next room turns out to be a notorious gangster named Edward Ratchett (Johnny Depp, creepier than ever) who exits the film as soon a the train leaves the station and derails in a blizzard.

While they wait to be rescued, the other passengers are plunged into a web of suspicion. They all have one thing in common—links to the old unsolved kidnap-slaying of a socialite baby on Long Island, which is Agatha Christie’s nod to the intriguing 1932 Lindbergh baby case in New Jersey. In the Lumet film, details of the case were frozen and framed into Police Gazette headlines while the credits were busily unraveling. It was not the kind of movie in which you could allow your mind to wander for a single second; every clever daguerreotype rotogravure illustration was a clue to what happened later. You couldn’t be lazy watching Murder on the Orient Express, and that was half the fun.

In the new version, Branagh throws clues around like confetti, and the cuts to the kidnapping case five years earlier are haphazardly thrown in too late in the film to achieve much impact. Instead of exposing the participants in the kidnapping plot, the flashbacks to this manipulative plot device are so clumsy and awkwardly pasted together that in the end, when Poirot lines up the entire cast to reveal the killer, you’ve already forgotten what each character is talking about. This unneeded retread cost 100 times what the Lumet film did, with less than half of the beauty, suspense and excitement—not to mention nary a shred of the glamour.

As a director, I admire Kenneth Branagh for eschewing video games and Marvel comics in favor of Shakespeare and other literary classics on film, but this time he’s much too self-indulgent with his repeated use of close-ups—of himself. It’s clear from the start who his favorite passenger on the Orient Express is. He also has the best lines, although the Poirot moustache now looks like two Polish sausages separated by a fork.

No other single performance stands out the way they all did in the 1974 film, although it’s fun to watch Willem Dafoe masquerading as a phony professor with an Austrian accent. Penelope Cruz as a religious Swedish missionary (the role that won Ingrid Bergman an Oscar) is not so much stranded on a train in a snowstorm but more absurdly at sea. And in the role of a fussy, cantankerous princess, this is the first time I’ve ever seen Judi Dench deliver a performance that is merely perfunctory, without a single spark. Since the weak casting provides no distinguishing marks, it’s hard to tell the suspects apart or fake any serious interest in any of them.

Filmed in 65-millimeter with too many computer-generated digital effects to look convincing, the décor is properly moody, but nothing is as dazzling as Tony Walton’s sets for the Lumet version, and I really missed the lush Oscar-nominated music by Richard Rodney Bennett and the visionary cinematography by the great Geoffrey Unsworth (Cabaret). Instead of making everything look like it was photographed through a heated brandy snifter, the whole thing looks surprisingly dull.

There’s something about trains (and murder mysteries set on trains) that makes my heart beat faster, and Sidney Lumet’s Orient Express was the train to end all trains. It made the old Broadway Limited look like a sidecar. There is little left to say, except that the train in this Murder on the Orient Express looks like it never left the station. 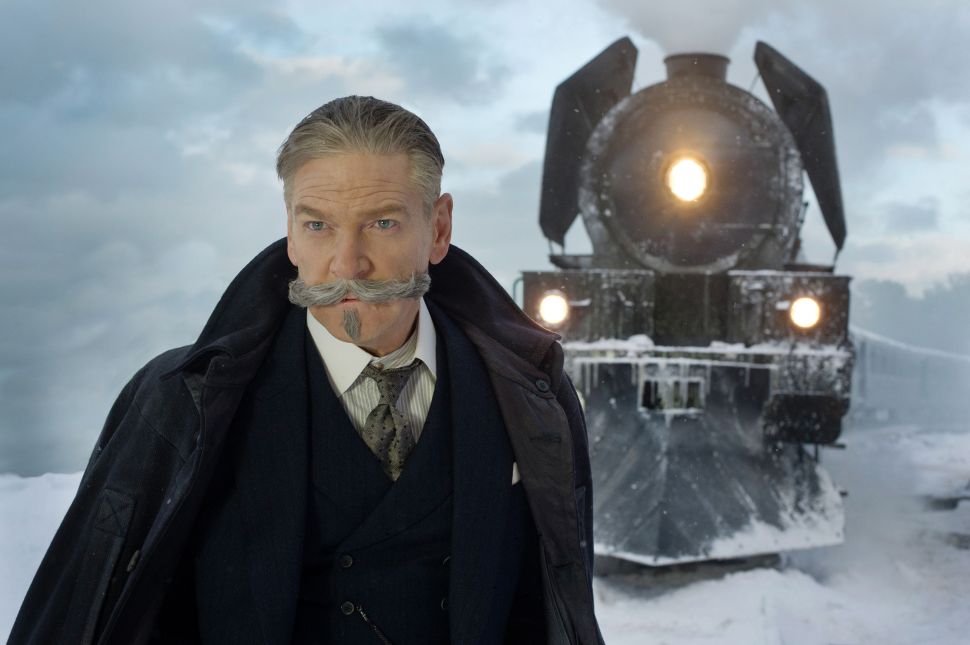