Now that one of the dullest and least rewarding years in the history of motion pictures is finally dragging its butt to a welcome end, it is clear they saved the best for last. The Post, Steven Spielberg’s relevant and riveting chronicle of Kay Graham’s brilliant reign as publisher of the Washington Post, Lady Bird, the fresh and original coming-of-age film about Greta Gerwig’s formative years as a restless California high-school outsider struggling to find her own identity in the shadow of an overpowering mother, and a galvanizing performance by Annette Bening in Film Stars Don’t Die in Liverpool, about the final, tragic days of faded Oscar winner Gloria Grahame, are three late must-sees. They are joined by one of the most gorgeously shot, intelligently written, and sensitively acted and directed films I’ve ever seen—a rhapsodic and heartbreaking love story about a summer idyll that changes the lives of a 17-year-old boy and a 24-year-old graduate student in Northern Italy. Riding in on the crest of unanimous raves from film festivals throughout the world, Call Me By Your Name is a masterpiece of subtle emotions, intense sensuality and breathtaking beauty.

Despite an awkward, hard-to-explain title, Call Me By Your Name, exquisitely written by James Ivory and elegantly directed by Luca Guadagnino from the leisurely autobiographical novel by Andre Aciman, is set in 1983 in a lush, sunny villa in Tuscany inhabited by a renowned multi-lingual American archeology professor, his warm and worldly wife and their teenage son Elio. Every summer they invite a promising American college student with an eager mind to spend six weeks assisting the professor in his research. This summer it’s a ravishingly handsome scholar named Oliver (Armie Hammer) who charms everyone at the palazzo with his impressive knowledge, poise, humor and enthusiasm. Everyone except Elio (a breakthrough performance by Timothée Chalamet) who resents relinquishing his room to a stranger as well as his father’s instant fondness for Oliver. While the visitor goes about making a strong impression digging for underwater artifacts in Lake Garda, Elio is reserved but intrigued by his father’s good-looking, brainy American intern. Oliver is not only movie-star handsome enough to attract all the local girls, but he seems to excel at everything—history, sports, disco dancing, and literature.

As the summer wears on, Elio becomes more aware of his growing sexual confusion. He’s had some experiences with girls, but nothing is as fulfilling as being with Oliver. During the day, they ride bikes, explore the Italian sights, taste the local customs. For relaxation, they read 16th century French romance novels, swim, enjoy al fresco meals prepared by the family cook enhanced by fresh, ripe apricots from the orchard, and bask in the sun wearing tight shorts and swim trunks. If you have even a slight craving for the Italian summertime, you’ll want to call your travel agent and book a flight before sundown.

The fact that they’re all Jewish is beside the point (and given Armie Hammer’s blond hair and blue eyes, not totally persuasive, despite the gold Star of David chain around his neck he flashes every time he shows his sun-tanned chest) but it does serve as a worthy ice breaker in the developing attraction before Oliver and Elio become lovers. “I come from a small town in New England,” says Oliver. “So I know how it feels to be an outside Jew.”

The real heart-tugging element is the way the two boys allow themselves, however reluctantly, to get close enough for love: Elio is desperate for affection in his alienated confusion and ready to leap like a puppy into the arms of someone he trusts, Oliver is aware of his carnal knowledge but too reserved to make a move. The ecstasy in the eventual sex scenes is passionate but discreet, the anguish in saying goodbye is unbearably universal, and the conclusion features a wise and deeply tender-hearted speech by Elio’s father (a titanic but understated performance by Michael Stuhlbarg) that cannot fail to move anyone who has ever longed for an act of parental guidance that rarely comes and is never self-evident.

The direction by Luca Guadagnino (A Bigger Splash, I Am Love) is reminiscent of Bertolucci’s sensitivity at its best, the fabulous cinematography by Sayombhu Mukdeeprom rapturously captures the rich work of art that is Italy in summer, and the actors are to die for. For Armie Hammer, who usually excels playing macho action heroes, the seductive role of Oliver is a bold departure that comes as both a surprise and a challenge. He meets the task with both skill and nuance. And Timothée Chalamet is a penultimate counterpart, holding his corner of the screen in every scene. The entire finale holds the camera on his face for what seems like an eternity as the tears appear, fade away and translate feelings into beguiling expressions that stay with you long after the film ends. What a career this young man has ahead of him, and how exhilarating it will be to see what he does next. 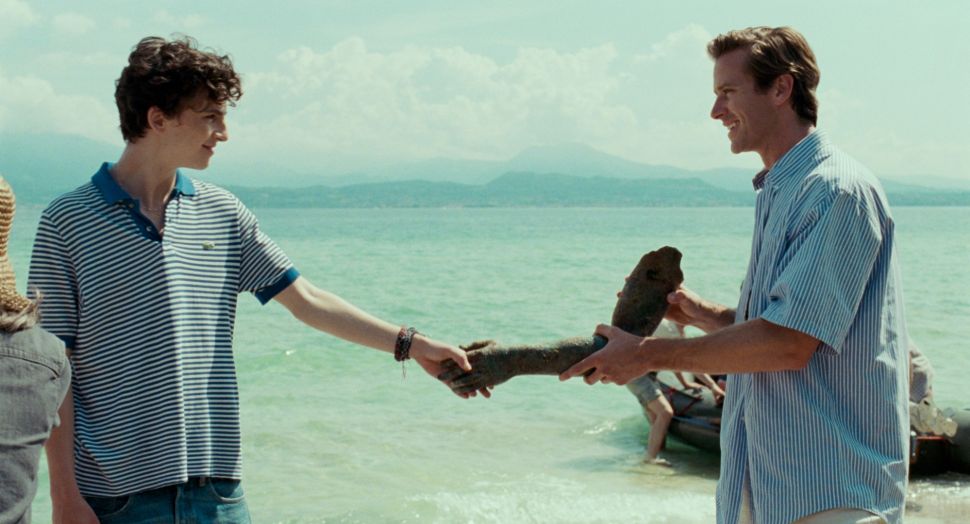