Martin McDonagh is an Irish playwright who has written several plays bizarre and shocking enough to mystify audiences and draw mixed reactions from critics, who tend to go overboard praising anything that is different for the sake of being different. He’s the author of a diverse bag of such grim, unsettling, Grand Guignol dramas as The Beauty Queen of Leenane (wonderful) and The Pillowman (dismal). Unfortunately, he also labors under the delusion that he’s a movie director. He wrote a numbing horror called Seven Psychopaths, followed by a confused stumblebum of a movie called In Bruges, the most pretentious bucket of swill since I’m Not There, only worse. Instead of Cate Blanchett as a man, it was about a racist dwarf hooked on horse tranquilizers.

Which brings us to his third film, a mixed bag of dumb jokes and unspeakable violence that is a big improvement over his other work (it towers over Seven Psychopaths, which was one of the worst movies ever made) but not good enough to write home about at today’s inflated postal rates.

What is recommended without reservation is a fine, funny central performance by Frances McDormand that is the best thing she’s done onscreen since Fargo. Vicious and foul-mouthed, with the permanent scowl of a woman who knows her breath smells like an open sewer, she’s Mildred Hayes, the paragon of sang-froid in a fictional hick town populated by idiots and run by a police force comprised of winners in a contest for morons. Living in a rage since her daughter was abducted, raped and murdered seven months ago, Mildred rents three battered, peeling advertising signs so old and faded they haven’t been used since 1986 and paints insulting signs addressed to the local sheriff and his sub-mental deputy (Woody Harrelson and Sam Rockwell, regulars in the Martin McDonagh revolving repertory company). Her goal is justice, and when everyone in Missouri reads “Raped while dying and still no arrests? How come, Chief Willoughby?” it hits a nerve.

Suddenly, the cops who spend their time sitting around eating Krispy Kremes and harassing the black citizens of their town are shamed into high gear. Chief Willoughby (Harrelson) has pancreatic cancer and Mildred wants the billboards to do their job before he croaks. After he commits suicide, Deputy Dixon (Rockwell) declares war, but he’s already one fox trot away from the loony bin, so he inflicts most of the damage on himself, goes berserk, and sets fire to the courthouse, burning half his face off.

Mildred, meanwhile, blows up the police station and gets saved by a used car salesman (Peter Dinklage) who clearly wants to get into her pants. The off-the-wall ending has the eccentric, demented Mildred joining forces with the sub-mental and recently fired Dixon as they drive down the highway in a pickup truck with a rifle, on their way to kill somebody.

I didn’t like Three Billboards, but I respect McDonagh for taking his lewd, vulgar screwballs in directions without a compass and leaving viewers wondering where in the world the film will go next. These are horrible people who are so insane that they inspire fear, but unpredictable enough to give a new slant to crime and mendacity. There’s plenty of uncontrolled violence—so much and so heinous that whole scenes are harder to watch than a gangster flick. When Mildred visits a dentist’s office and cusses up a storm while she drills a hole through the dentist’s fingernail with his own instrument of torture, some people screamed and others laughed. When James, the car salesman who is a dwarf, takes Mildred to a local greasy spoon and says “I gotta go to the little boys room,” some people roared and others moaned.

The film is uneven in every way, but the big failure is writer-director McDonagh’s inability to keep the story coherent. Like everything he writes, Three Billboards Outside Ebbing, Missouri wobbles unsteadily between edgy, repulsive violence and edgy, unstable black comedy—both sides of the equation losing balance in a slick morass of moral collapse. Most of all, it’s about good actors slumming. This includes the stupidly endearing Sam Rockwell, John Hawkes as Mildred’s wife-beating ex-husband who left her for a 19-year-old bimbo, and the doubly disposable Lucas Hedges (Manchester by the Sea, Lady Bird) in the underwritten role of Mildred’s bewildered teenage son. Martin McDonagh wants to be one of the Coen brothers, but he’s not an American and he doesn’t understand the language. It’s quite understandable why Frances McDormand understands his words all too well. She’s been married to writer-director Joel Coen since 1984. It doesn’t matter to her that for other people, watching Martin McDonagh movies is like a brain concussion. They leave you thinking and staggering in the dark, at the same time. 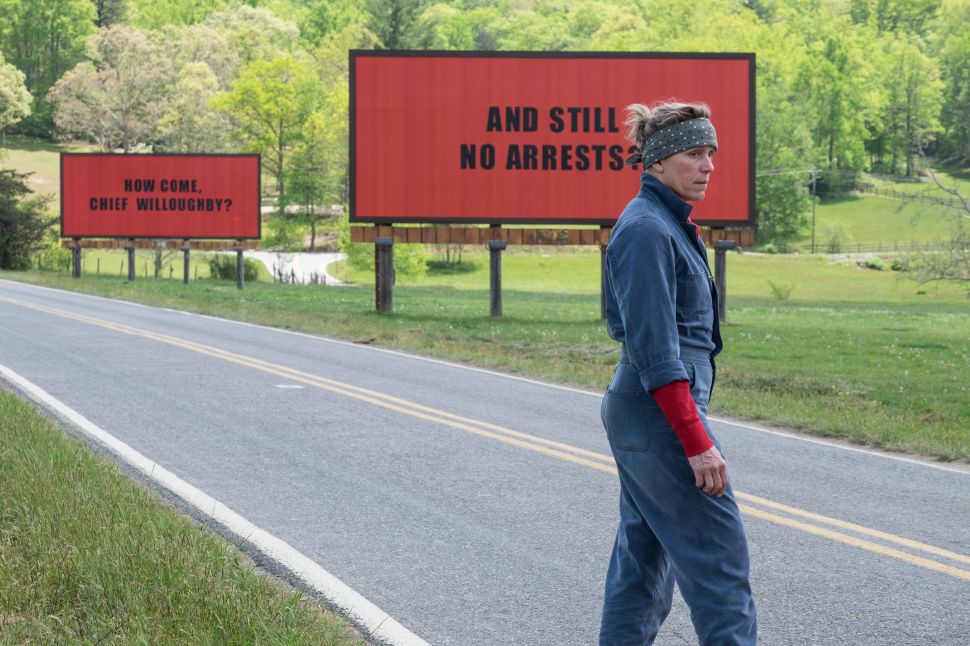