Last Flag Flying is another colossal bore from overrated Texas writer-director Richard Linklater, who specializes in lazy, loping, make-it-up-as-you-go-along endurance tests to see how long an audience can stay awake. (Am I the only one who snored his way through the interminable Boyhood?) His movies are talkathons that drag on through pointless philosophical discussion, often initiated by teenagers. They are always too long, and they usually star Ethan Hawke. The best thing about Last Flag Flying is that Ethan Hawke is not in it. Otherwise, it’s business as usual, and the business is excruciating to get through.

Steve Carell plays a disgraced Vietnam veteran living in New Hampshire with a dishonorable discharge who, with two best Marine buddies, served two years in a Navy prison for stealing their unit’s morphine supply to get stoned before it could be used medically for a dying comrade. Now, ironically, he’s called “Doc” because he practices medicine himself. His life crashes when he’s notified that his son has been killed in Iraq, so he packs his bags and heads for Washington D.C. for the boy’s military funeral at Arlington Cemetery.

Making stops along the way, he visits with the two comrades he hasn’t seen for 30 years, talking them into accompanying him on the journey for moral support. Sal (Bryan Cranston) runs a derelict bar in Norfolk, Virginia, and sanctimonious reformed hell-raiser Richard (Laurence Fishburne) is now a Baptist minister in Pennsylvania. Neither of them have any desire to pull the scabs off old wounds, but for reasons known only to Linkater and his co-writer Darryl Ponicsan, they agree to tag along with their old pal.

Scores of arguments, moral debates and superfluous scenes about eating, drinking and sleeping in motels pile on the running time before the estranged combat buddies get to the point of claiming the dead body bag of the alleged military hero who was killed in the line of duty and deserving of a military burial. But along with the kid’s flag-draped coffin, they also discover the news that instead of a heroic death in the line of action, Doc’s son was shot in the back of the head in a store in Baghdad. Outraged, Doc defies the U.S. government’s plans to bury the boy with phony, undeserved honors and takes the corpse back to Portsmouth in a rented U-Haul.

The movie turns into a road movie with a confusing mass of changing locations, a lot of leaden jokes are thrown into the Cuisinart to soften the lugubrious somber tone in general, and all three actors pull out the stops, with Laurence Fishburne emoting to the mezzanine when there isn’t one.

The three last-minute happy endings are pulp fiction at its worst. The minister learns to be a better preacher of the gospel than he was before. The boisterous Sal sheds a tear from scruffy old eyes that have seen too any years of sleepless nights and early morning hangovers, and reveals that he’s lonely enough to offer Doc a partnership and a role as roommate until they grow too old to find anyone else to take up the empty slack. Bryan Cranston is always compelling, but Last Flag Flying is an uphill slog in slow motion. 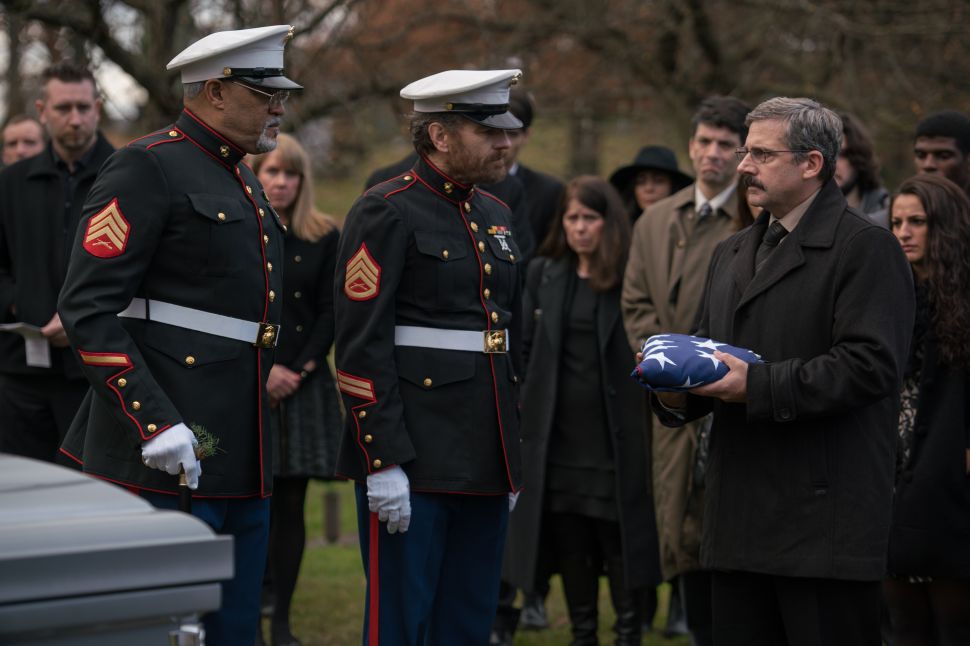