One of the more interesting aspects of Cold War 2.0 is the ideological struggle between the postmodern West and Russia—a struggle that most Westerners deny even exists. President Barack Obama, after Moscow seized Crimea in early 2014, pronounced that there was nothing big afoot: “After all, unlike the Soviet Union, Russia leads no bloc of nations, no global ideology.”

Obama’s statement was wrong then, and it’s even more wrong now. As I’ve explained, there is an undeniable ideological struggle between Vladimir Putin’s neo-traditionalist Russia and the post-modern West—one that prominent Russians talk about all the time. In the Kremlin’s imagination, this fight pits the godless, materialistic, doomed 21st century West, too lazy to even reproduce, against a tough, reborn Russia that was forged in the murderous fire of 74 years of Bolshevism.

The yawning gap between Russian and Western values can be partly explained by the fact that Communism shielded the former from the West’s vast cultural shifts since the 1960s. Living under the Old Left provided protection against the New Left. As a result, Russians are living in our past and find current Western ways incomprehensible and even contemptible.

Take the reaction to America’s present panic about sexual harassment, which is felling celebrities and politicians left and right. In Moscow, this looks like madness, punishing powerful men for doing what powerful men have always done. Their late-night TV uses our sex panic as a punchline, proof that Americans are weak and feminized, held hostage to radical ideology. Andrei Konchalovsky, one of Russia’s top film directors (including some Hollywood hits), expressed his view plainly: “Thank God we live in a country where political correctness has not reached the point of absurdity.”

There is an undeniable theological aspect to this Russian contempt for post-modern Western values. The Russian Orthodox Church, which isn’t exactly state-controlled but is tightly linked to the Kremlin, regularly denounces the godless West and its sins—homosexuality and feminism especially. Orthodox clerics regularly castigate our “Satanic” ways as an example of what Russia must repel if it wants to survive the 21st century.

Denouncing the West as godless and decadent is a venerable tradition in Russian Orthodoxy with deep historical roots, and it’s been reborn after Communism with gusto. Patriarch Kirill, the head of the ROC, frequently breathes fire on post-modern Western ways, and a couple weeks back he shared them with John Huntsman, the newly arrived American ambassador in Moscow, in an awkward meet-and-greet that turned into a theology lecture.

Simply put, Kirill explained, America today is doing to itself what the Bolsheviks did to Russia: forcing a godless, secular ideology onto society. “Christian values are being destroyed… The West is abandoning God, but Russia is not abandoning God, like the majority of people in the world. That means the distance between our values is increasing,” he stated bluntly. Kirill’s insistence that America and the West are the outliers here, with Russia and most of the world on the side of traditional religion and values, is an important point that merits pondering.

The traditionalist nature of Putinism, always present, has grown more intense in recent years as the Kremlin has sought to enshrine an official ideology as confrontation with the West has grown. Whatever Vladimir Putin may actually believe, he has played the public role of an Orthodox believer quite effectively. He has cultivated senior ROC clerics, who provide regime-endorsing soundbites as needed, and the church gives Putin legitimacy in the eyes of average Russians, who aren’t especially religious in terms of church-going, yet they see an Orthodox identity as reassuring and plausible in Communism’s wake.

Putin has returned the church’s affection, stating that Russia’s “spiritual shield”—meaning Orthodoxy—is as important to the country’s security as its nuclear shield. In turn, Orthodox leaders portray Putin’s as a God-given figure, divinely sent to bring the country back to faith and great-power status out of the wreckage of atheistic Bolshevism.

Prominent here is Konstantin Malofeev, a hedge-fund billionaire turned militant Orthodox nationalist, who created Tsargrad TV, a 24-hour cable new network, to push those values to the public. Malofeev, like the Blues Brothers, thinks he’s on a mission from God, and his network is basically the Russian Fox News, if FNC focused on theology and mystical nationalism instead of blonde newsreaders.

Malofeev’s affection for Russia’s president and his system is clear: “We believe that Putin is the best and the only leader [for Russia]… He is trying to make Russia the state where Christians can live and can save their souls for eternal life.” While the deeply Eastern nature of Orthodoxy means it has little appeal for Western Christians, there’s no doubt that Kremlin messaging is reaching some, especially American Evangelicals, whom Moscow sees as potential allies abroad.

The notorious gadfly Aleksandr Dugin goes further: “Simply said, the Antichrist will not come before there will not be anymore supporters [of Orthodoxy]… What is the coming of Antichrist? It is secularism. It is modernization. Westernization. Materialism. Scientific development. The concept of progress.” He added that Putin is “exactly” the figure who is resisting the Antichrist on earth.

Dugin, it should be noted, isn’t some random flake or religious nut, he’s a Big Idea thinker who’s taken somewhat seriously in the Kremlin, although his real role seems to be Moscow’s ambassador-at-large to the Western far-right. He is close to the Russian security services and he runs a website that pushes his hardline Orthodox nationalist message in several languages, including English. Its name comes from the Greek word for “he who resists the Antichrist.”

Recently, Putin has played up the Orthodox nationalist message in a series of public events. He visited Mount Athos, Greece’s famous Holy Mountain, in May 2016 in a pilgrimage of sorts. It was shown live, with great fanfare, in wall-to-wall coverage on Tsargrad TV, and Putin was treated by the monks there more like a visiting Byzantine emperor than as the Russian president.

This month, Putin was present for the grand reopening of the New Jerusalem Monastery outside Moscow, a sprawling 17th century complex that was destroyed by the Nazis in World War II and was rebuilt from the ground up over the past decade at great expense. It did not go unnoticed that the monastery was originally constructed to glorify the Third Rome idea, the centuries-old religious myth that Moscow is the sole successor to Rome and Byzantium, which has long served as a driver of Russian nationalism and imperialism.

Then, last week, Patriarch Kirill warned of coming Armageddon. After a service at Moscow’s Christ the Savior Cathedral, he made a stunning statement: “One must be blind not to see the approach of the terrible moments of history about which the Apostle and Evangelist John the Theologian spoke in his Revelation.” Adding that the world’s end is in the hands of humanity, and something that Russians and all nations must stop, Krill warned of Earth imminently “slipping into the abyss of the end of history.”

These are the comments of a top cleric, not the Ministry of Defense, but it should be noted that the Russian military is now practicing for global thermonuclear war in a manner it hasn’t done since the last Cold War. Last month, in an apparent continuation of September’s Zapad mega-wargame, Russia’s strategic nuclear forces conducted a huge exercise that involved Putin himself. This exercise involved all three “legs” of Russia’s nuclear triad: land-based ballistic missiles, long-range bombers, and submarines with ballistic missiles. In all, several cruise missiles were fired while three ballistic missiles were launched—and Putin personally gave the launch orders.

This is a rare move, not to mention a violation of our nuclear treaties with the Kremlin, and Moscow was sending a hard-to-miss message. As Real Clear Defense reports, “The most striking thing about the exercise was that it was announced at all and that President Putin was characterized as ‘overseeing’ it and ordering the missile launches. This exercise was conducted in a sensitive period in U.S.-Russian relations. Russia did not have to announce the exercise. It has previously staged major strategic nuclear exercises without announcing them.”

It would be a mistake to directly lump nuclear exercises in with apocalyptic messages from leading Kremlin ideologues. However, it’s hardly encouraging that the Putin regime is pushing propaganda about planetary end-times while indulging in saber-rattling nuclear wargames for the first time in decades. Whatever else this aggressive Moscow messaging means, none of it bodes well for peace. 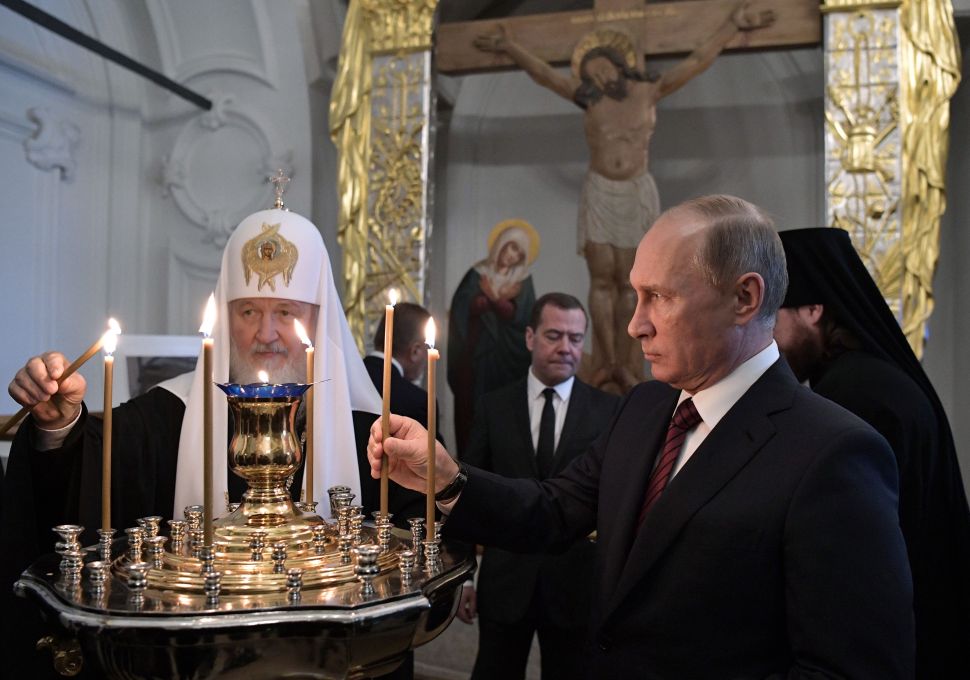