Attempting to get to the bottom of a complex espionage case, untangling multiple strands of secret agentry, is the most challenging exercise in all intelligence work. It taxes the minds of the most gifted counterspies, particularly when the operation extends over years, even decades, and it involves a complex cast of players, some of them Russian.

A half-century ago, when our Intelligence Community was assessing if there were Kremlin moles inside our spy agencies (spoiler: there were), a nasty bureaucratic fight ensued that dragged on for years. The protagonist was James Angleton, the CIA’s top counterspy for two decades, who coined the term “wilderness of mirrors” to describe the impenetrable mystery of certain espionage operations. In typical Angletonian flourish, he borrowed the phrase from a T. S. Eliot poem to capture the enduring mystery of never quite grasping up from down in a case, or knowing who’s really running the show—and looking at it too closely only leads to more confusion.

I’ve previously written about Angleton’s “wilderness of mirrors,” since it remains a fascinating saga still, and I noted how tricky the counterspy game can be:

One of the alluring aspects of counterintelligence is that very complex cases can turn on very small, sometimes minute, pieces of information. And years of getting to the bottom of an operation can be swiftly overturned when one tiny—and possibly very inconvenient—fact comes to light. This is particularly a possibility when what exactly happened in a case proves hard to pin down. As most cases involving the Russians are.

This is relevant today, since between Special Counsel Robert Mueller’s team and the efforts of our Intelligence Community, the secret side of Washington, D.C., is currently engaged in the biggest counterintelligence investigation since the days of VENONA in the early Cold War, when the FBI and NSA unraveled a vast Kremlin spy apparatus in our country, centered in our nation’s capital.

Seventy years later, it’s the same story, except this time the targets include not just senior White House officials—VENONA revealed that Soviet moles had burrowed deep and high into FDR’s four administrations—but the man in the Oval Office himself. Just exactly what President Donald Trump’s relationship to Moscow is constitutes the cornerstone of the inquiry, and that’s a vexing and complex question, because it requires close examination of Trump’s activities at least going back to 1987, when he took a trip to the Soviet Union.

No part of the investigation has gotten more rubber-necking than any kompromat that the Russians may possess on our president. I’m talking, of course, about the alleged “pee-pee tape” that caught the public’s attention when it was posited by the former British spy Christopher Steele in his now-infamous dossier on Donald Trump, which has become a lightning rod for all sorts of speculation, not necessarily informed.

As I’ve written about the Steele dossier, although a great deal of its raw intelligence has turned out to be true, large portions reek of disinformation— including the most salacious bits. As I explained:

The dossier’s “pee-pee tape” claim is viewed with derision by most Western spies who know the Russians. It’s very likely that the Kremlin possesses kompromat on the president—senior intelligence sources from several countries have confirmed to me that unpleasant videos of Trump exist—yet there’s no reason to believe Steele’s particular claim here, without corroborating evidence.

So, Steele’s porn-worthy allegation appears to be untrue, but the idea that our president has acted out in sexually controversial (and perhaps illegal) ways—and that somebody has filmed it—is taken very seriously by intelligence experts. Ever since Trump announced his candidacy for the White House in June 2015, espionage gossip everywhere has bandied about what might exist to corroborate decades of rumors about Trump’s antics.

It’s plausible that such kompromat exists, given our president’s lifestyle. Forty years ago, when he was partying at Manhattan’s Studio 54 at its cocaine-fueled heyday alongside celebrities and hangers-on (including the just-indicted Paul Manafort and the swinging Roger Stone), it was a wild scene of which Trump boasted: “I would watch supermodels getting screwed, well-known supermodels getting screwed, on a bench in the middle of the room. There were seven of them and each one was getting screwed by a different guy.”

Then there are the allegations that the president’s penchant for pretty girls does not always pay attention to the age of consent. One woman who’s claimed that Trump raped her when she was just 13 years old has repeatedly filed suit against the president, only to drop the case each time, most recently last year. That’s connected to the mysterious case of Jeffrey Epstein, the billionaire hedge-funder and convicted sex offender, whose “friends list” reads like a who’s-who of the male half of America’s rich and powerful.

President Trump is on that list, and rumors have swirled for years about his participation in Epstein’s underage sex escapades. There appear to be connections between Epstein’s debased antics and Trump’s Mar-A-Lago resort, now termed “the winter White House.” Hard facts remain elusive, however, and perhaps the media’s lack of ardor for getting to the bottom of this sordid case may have something to do with the fact that Epstein’s pals are a powerful bunch—and Bill Clinton is mixed up in this too.

To sum up, the idea that President Trump has been caught on tape doing something sordid is inherently in the realm of the possible. But has he been? Here’s where things get tricky, fast. I’ve investigated this issue for the past couple years. I’ve talked to dozens of well-placed sources (many of them longtime spy-friends), and I can share with you some basic conclusions.

As many as a dozen intelligence services worldwide, on four continents, are in possession of some sort of “Trump tape” featuring sexual escapades of a controversial nature; in some cases, the women involved appear to be underage. Some of these tapes have been shared with the Mueller investigation.

One Western intelligence agency with a solid professional reputation is in possession of an unpleasant Trump tape that they assess “with high confidence” is bona fide, i.e. exactly what it appears to be. They obtained the tape from a trusted source who plausibly had access to it. Over the decades, Trump has traveled widely—including to Russia more than once—and thereby exposed himself to surreptitious filming in numerous countries.

However, here’s the rub: Many of the “Trump tapes” floating around in spy circles worldwide cannot be verified, while some of them are obvious fakes. The Western spy agency that’s holding a Trump tape they’re pretty sure is real has also been approached two other times with tapes that were less solid—and one of them was transparently fake.

It’s obvious to savvy Western counterspies that someone is spreading fake Trump tapes—not all of them high quality—to muddy the waters. The obvious suspect, of course, is the Kremlin. Since the Russians know all about President Trump’s decades of personal antics, including what kompromat exists on him, they appear to be pushing dubious and unverifiable tapes, some of them obviously fake, to create chaos and confusion.

It’s working, and in the current climate, it seems doubtful that any Trump tape can be verified sufficiently to have a mainstream journalistic outfit report its details. After all, with multiple fakes out there, any bona fide tape would require not just rock-solid technical authentication, but also firming up the exact place and date of the incident, plus confirmation from the girl(s) caught on camera too. That seems like an insurmountably high bar to clear at present.

This, then, is yet another successful Kremlin spy operation, one more grand provocation to mess with our Western heads. Although Vladimir Putin is deeply disappointed with President Trump, who has failed to get sanctions lifted off Russia, much less make Washington and Moscow close partners in anything, keeping an increasingly damaged and ineffectual president in the White House, who’s incapable of accomplishing much except rage-tweeting, suits Moscow’s foreign policy needs just fine.

A half-century ago, the Kremlin dispatched multiple dangles and even a fake KGB defector to Washington to confuse American counterspies and, above all, to protect their real moles in our nation’s capital. It worked like a charm. The resulting confusion birthed Angleton’s vaunted “wilderness of mirrors,” and eventually it drove that brilliant and seasoned counterspy over the edge, never to return.

Now, in a more technologically advanced age, the Russians are playing a nearly identical operational game with fake tapes, websites, trolls and bots. The Kremlin appears to have pulled it off again, and it will take years, probably decades, to get to the bottom of the Trump tapes saga—if anybody ever does. Welcome to the Wilderness of Mirrors, Trump Edition. 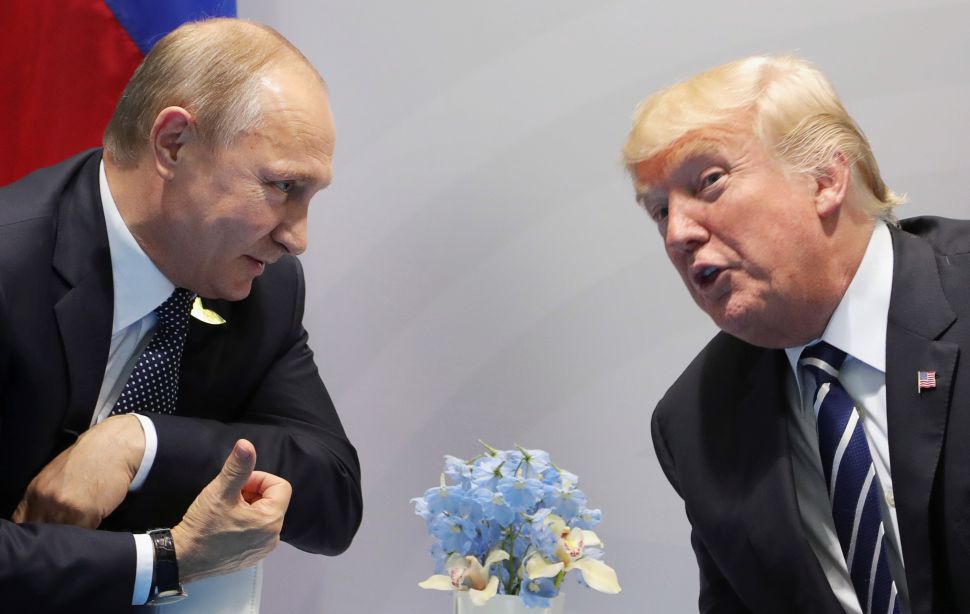